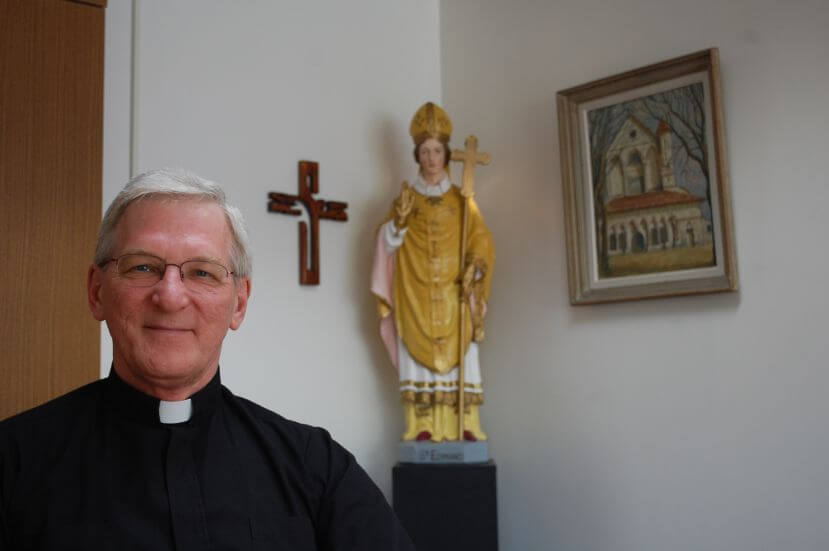 As the Society of St. Edmund celebrates the 175th anniversary of its founding in France, its members continue to serve God with zeal.

“That zeal was in our DNA right from the beginning,” said Father Stephen Hornat, superior general of the order based at St. Michael’s College in Colchester.  “Our founders were holy men with passion for the faith and the priesthood. … I see that same zeal playing out” in current Edmundite missions of education, social justice, spiritual renewal and pastoral ministry.

The Society of St. Edmund began in a rural region of France to revitalize the faith of people who had become increasingly alienated from the Catholic Church. The founder, Father Jean-Baptiste Muard, began the society at St. Mary’s Abbey in Pontigny, the final resting place of St. Edmund of Canterbury.

The arm of St. Edmund, once enshrined at St. Michael’s College then at Nativity of the Blessed Mary Church in Swanton (once staffed by the Edmundites), is now at the order’s Enders Island retreat center in Connecticut.

At the end of the 19th century as politics became increasingly hostile toward religious orders, the Society of St. Edmund decided to establish a new ministry in Canada, ministering to the French-speaking Catholics in Quebec.

The order also provided priests to minister in Venezuela for many years; the last Edmundite to serve there returned to the United States in July after 51 years.

The order currently has 25 members – priests and brothers — most living in Vermont.

Edmundites serve in parish ministry in Selma, Ala., and in retreat house administration in Mystic, Conn. In Vermont they serve at St. Michael’s College – an educational institution the order founded – and in churches in Essex Junction, Essex Center, Putney, Townshend, Stratton, Hinesburg, Charlotte and Winooski. They also run St. Anne’s Shrine in Isle LaMotte.

Their ministries are diverse, but all seek to make God known and loved in deep and meaningful ways.

Looking to the future, Father Hornat noted that after the order’s foundation, members lived together at a monastery and went out to do their ministry, so he would like to return to the spirit of that foundation by strengthening community life. “Nicolle Hall [the order’s residence and headquarters at St. Michael’s College] is going to be the new Pontigny,” he said, where members will focus on community and prayer life and have an increased presence on campus. “When we can be strong as a religious community, we can make an impact in evangelization. We need to be that witness. We need to find our strength and our sustenance in community life and prayer.”

Zeal, he added, “is a contagious quality we have in the community.”

Among the future events to celebrate the 175 anniversary of the founding of the Society of St. Edmund is an St. Edmund’s Lecture and Reception Nov. 15 at St. Michael’s College; a Nov. 16 Mass at the college’s Chapel of St. Michael the Archangel; a heritage trip to France in May 2018; a July 3, 2018, Mass and picnic at Holy Family Church in Essex Junction marking the beginning of the Edmundite community; and the Aug. 15, 2018, closing of the anniversary year at the shrine.