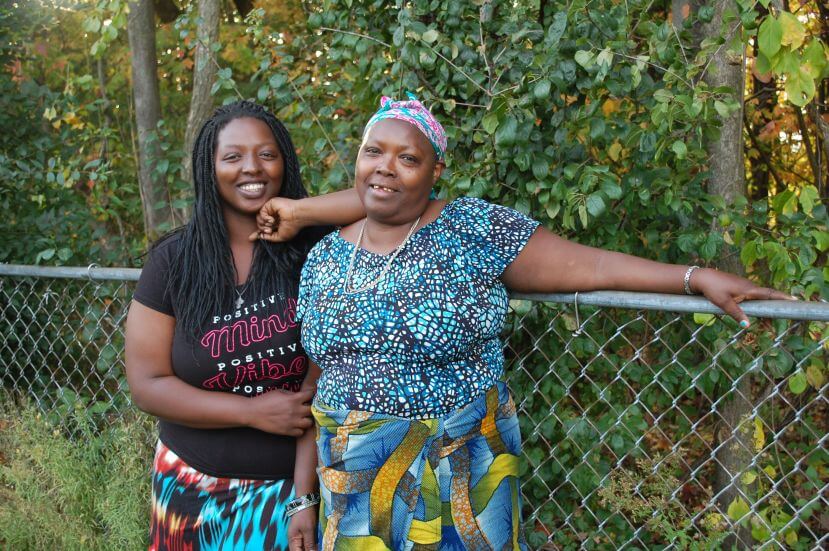 Claudine Nkurinziza (left) and her mother, Merida Ntirampeba, are parishioners of Winooski's St. Francis Xavier Church, where they say New Americans are embraced.

Once a stranger, now a friend

Merida Ntirampeba’s first impression of St. Francis Xavier Church in Winooski was one of welcome.

She had left her native Berundi in 1993 and came to Vermont in 2004 after 11 years in an overcrowded refugee camp in Tanzania where threats and violence were not uncommon.

So after settling into an apartment in Winooski with her family, she wanted to go to church and was directed to the two-spired brick church on St. Peter St. “The first time I went to the church the community was welcoming. Everyone I met was so kind,” she said in Kirundi, her 24-year-old daughter, Claudine Nkurinziza, translating for her. Someone gave Ntirampeba money to help set up her new family home, another person offered her rides from church, and others helped her family with needed items like school backpacks.

Refugees bring to the parish an opportunity for grace, said Msgr. Richard Lavalley, pastor. They give members of the community the opportunity “to discover Christ in a new manner, an opportunity to see Christ — in a very real way — in need.”

In addition to helping this woman from Burundi, St. Francis Xavier Parish helps refugees and children of refugees in myriad ways from providing food and clothing, finding a place to live and engaging legal and interpreter services to providing scholarship assistance for children to attend Catholic schools and a cemetery plot for a dying man to ease his anxiety about where he would be buried.

“I do whatever I feel I am capable of doing,” said St. Francis parishioner Diane Potvin, the executive assistant to the pastor.

Clearly, she has extraordinarily capabilities as she escorts refugees — mostly from Africa — through their needs and requirements until they can function here on their own. She works closely with other agencies that are helping them.

“We do anything that makes them have a sense of self worth and that they are not alone,” Msgr. Lavalley said.

And the assistance is offered to Catholics and non Catholics alike. “The Gospel doesn’t say just take care of your own,” said Msgr. Lavalley, who was seen in local hip-hop trio A2VT’s video for their song “Winooski, My Town.” (It is a tribute to the new home of three young refugees from Africa.)

“Our Catholic values extend to everything we do, and the importance of charity and humility that comes with our faith is evident,” said Principal Eric Becker. “It’s important for us to be members of our Winooski community and see all the issues [refugees] are facing. We want to be good neighbors.”

Ntirampeba, 59, has given birth to 10 children; seven are still living — four in the United States and three in Burundi. She praises her parish for the help she and her family have received, both physical and spiritual assistance. This includes food, financial help, clothing and scholarships for St. Francis Xavier School and South Burlington’s Rice Memorial High School. Msgr. Lavalley baptized three of her children together.

“Only God knows how much the church and Msgr. Lavalley have done for me,” Ntirampeba said. “He is like a parent to me.”

She did not expect people here to be “so nice,” she continued. “I feel grateful and cared about. It’s supernatural for so much love.”

Her daughter, too, is grateful. Now working as an instructional aid at J.F. Kennedy Elementary School in Winooski, tries to “give back in any way I can.” Often that is by translating for new Americans and assisting with programs of Catholic CARES Network. “I never say no to them because they’ve done so much for us,” she said.

Her faith influences this attitude, and she cites the Gospel of Matthew: “The King will reply, ‘Truly I tell you, whatever you did for one of the least of these brothers and sisters of mine, you did for me.’”

Her motto, she added, is “treat everyone the way you want to be treated.”

Ntirampeba offered her gratitude to the people of St. Francis Xavier Parish “because they do so much for so many people.”

St. Francis Xavier Parish, once mostly populated by Winooski’s French Canadian immigrants and their families, “is not Winooski anymore,” Msgr. Lavalley said. “People come from all around.”

And they are embraced.