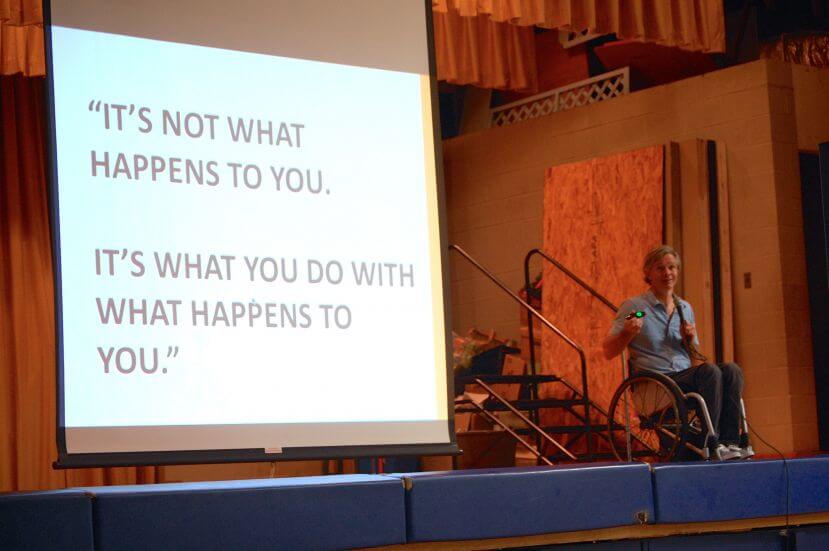 “It’s what you do with what happens to you”

Speaking from his wheelchair on the stage in the school gymnasium Sept. 13, one of the most decorated male mono skiers in Paralympic history told students in second through eighth grade that while no one is free of struggle, everyone has the opportunity to choose how they react to their challenges.

He said people can see themselves as victims or survivors, as overwhelmed or challenged, as alone or part of a team, as having only one strategy or as having many; the latter in each pair is what fosters resiliency, he said.

“Not being able to walk is the worst thing I could imagine,” said the Utah resident who is a graduate of Middlebury College.

In 1988 a skiing accident in Massachusetts brought his worst nightmare to reality; his ski popped off in the middle of a turn. He fell, broke two vertebrae and damaged his spinal cord.

Paralyzed from the waist down, he learned and achieved more than he could have imagined.

“This is the most powerful I’ve been in my life,” Waddell said, noting that he had to let go of “some of the things that tripped me up every day” like frustration and worry that could have prevented him from accomplishing his revamped goals.

He returned to college just two months after the accident, began mono skiing in less than a year and was named to the U.S. Disabled Ski Team a little more than two years later. With 13 Paralympic medals, he became the most decorated male mono skier in history.

“If I had never had my accident, I’d never have been the best in the world at something,” he told the Mater Christi students during his One Revolution Foundation’s Nametags Educational Program.

The program has been presented to more than 150,000 students in more than 550 schools throughout the United States and in Russia. Nametags does not focus on disability but rather the universal experience of challenge and the power of resilience.

Created by Waddell and resilience educator Donna M. Volpitta, the program centers on the message, “It’s not what happens to you. It’s what you do with what happens to you” and people’s collective responsibility to create communities that allow people to thrive. It focuses on helping students learn that they have the power to make choices about how they are perceived — the “nametags” they wear. In the face of adversity, they can choose resilience.

Friends have told Waddell they could never have done what he has done, overcoming the loss of his ability to walk and turning it into triumphs elsewhere.

“Inspiration comes when we hear the truth…that we all need to hear,” said Timothy E. Loescher, president/head of school at Mater Christi who introduced Waddell to the assembly. (They were friends at Middlebury College.)

He thanked Waddell for “helping us develop into the people we are called to be.”

He was inducted into the U.S. Ski and Snowboard Hall of Fame and the Paralympics Hall of Fame. Skiing magazine placed him among the “25 Greatest Skiers in North America.”

Patrick Walsh, 12, an eighth grader from St. Catherine of Siena Church in Shelburne, was impressed with Waddell’s tenacity and positive attitude.

For him, Waddell’s message mirrored the message of faith. “If you have a connection with God, you can get through anything. You can pray and feel better.”

Classmate Myla Altadonna, 13, said the message she would take from the presentation is “not to let anything get in your way.”

“Even when you have an obstacle, you can go on and do great things,” she added.