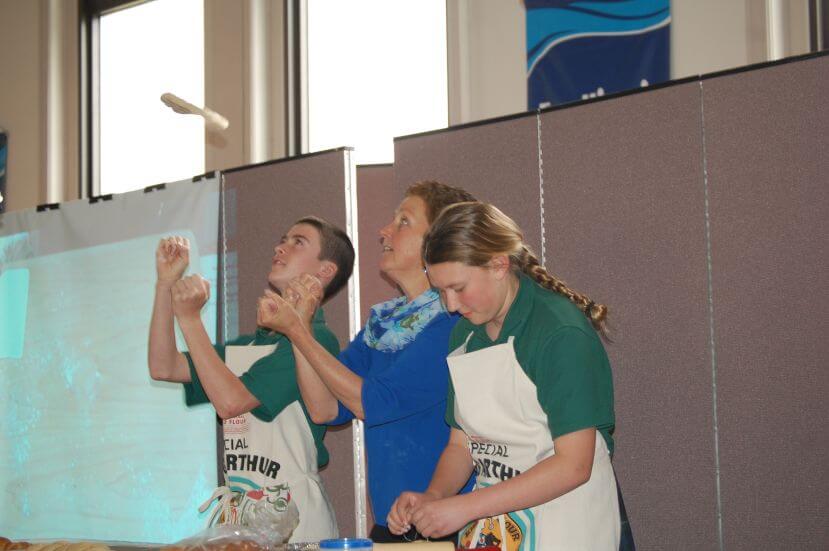 But it was a lesson in more than pizza making or even baking.

King Arthur Flour presented its “Bake for Good: Kids Learn, Bake, Share” program for students in fifth through eighth grades, and Evan was one of the demonstrators.

He and Grace Kobelia, 11, also a sixth grader, assisted Paula Gray, manager of the Bake for Good program, onstage, putting into action what she talked about: making dough from scratch.

Like a television cooking show, video close-ups of the dough-making procedures were shown on a large screen on the stage next to the table where the students and Gray worked.

One catchy lesson included in the program was the proper way to measure flour: fluff (in a bowl), sprinkle (into the measuring cup) and sweep (off excess with a dough scraper to even the flour in the cup).

Kneading requires “fold, push and turn” to get the dough soft, smooth, not sticky and stretchy, Gray instructed.

Once the students saw how it’s all done, they received a bread baking kit from King Arthur – based in Norwich – so they could bake at home. The kits included wheat and all-purpose flour, yeast, a dough scraper, a recipe booklet and a plastic bag and gift tag. (Gluten-free flour was given to students who are gluten-intolerant.)

Their instructions were clear: Bake one bread for themselves and one for the Sacred Heart St. Francis de Sales food shelf in Bennington. (They could choose to make rolls if they preferred.)

“They are ‘baking for good,’ baking for other people,” and that fits in with lessons learned at the school of caring for others as Jesus would have them do, commented Principal David Estes.

At the school, “we learn to be respectful and serve our community and follow the example of Jesus Christ,” Grace said.

Gray said representatives of King Arthur like to present the free program in Catholic schools, which are “all about the mission of sharing, caring and giving to others,” just like the Bake for Good program.

After assisting her in the school program, both Evan and Grace said they are more inclined to bake more, though both have some baking experience at home.

King Arthur Flour presents the Bake for Good program at about 200 schools each year; about 800 apply.

For more information, go to kingarthurflour.com/learnbakeshare.

In response to Burlington Bishop Christopher J. Coyne's call for a Year of Creation focused on Pope [...]