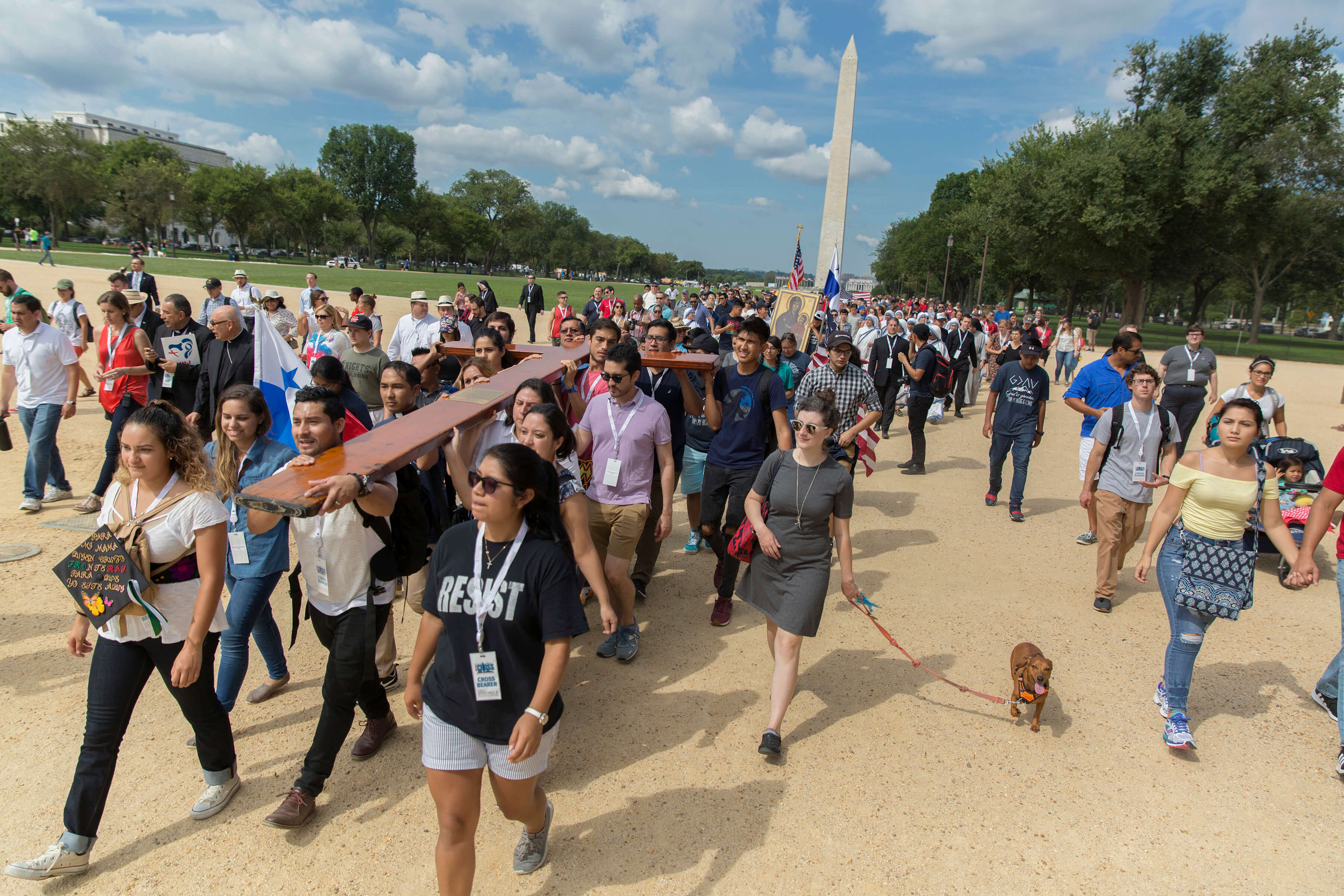 Despite the nearly 100-degree temperatures, Jaime Reyna found purpose in his four-hour drive from Corpus Christi to Houston.

With five teens from the Diocese of Corpus Christi, where Reyna serves as diocesan youth ministry director, he made a pilgrimage to the Co-Cathedral of the Sacred Heart in Houston, which hosted the World Youth Day Cross and Marian icon Aug. 23.

The two symbols of World Youth Day, the massive international celebration of the Catholic faith with young adults to be held in Panama in January, visited the archdiocese nearly one year to the day since Hurricane Harvey came ashore in 2017. The storm devastated several dioceses along the Texas Gulf Coast, including Reyna’s Corpus Christi, Victoria, Galveston-Houston and Beaumont.

More than 1,000 people joined Reyna for the three-and-a-half-hour celebration, which included veneration and procession of the cross and icon, as well as a Liturgy of the Word at which Auxiliary Bishop George A. Sheltz of Galveston-Houston presided.

The Corpus Christi teens helped carry the cross, which Reyna called a blessing.

“The fact that … they were going to be able to touch and carry the cross just like they do at World Youth Days, that some of them will never experience for different reasons, the fact that they were able to carry it here, they’ll have a story to share with not only their friends, but maybe their future children. It meant a lot for them, and they shared it with me and I think they’re looking forward to share it with everybody else at home,” he said.

After the procession, English, Spanish, Vietnamese, African descent, Filipino and Chinese community choirs from across the archdiocese joined to lead worship during continued veneration.

In his homily, Bishop Sheltz confronted the clergy sexual abuse scandals that have rocked the Catholic Church in recent weeks.

“I was very upset, how things were covered up by the (church) authorities and the bishops,” Bishop Sheltz said. “It made me mad, but I can’t just sit here and be mad. As a bishop, it’s part of my responsibility that we don’t let these things happen again. As a church, we must stand up and pray for those who have been hurt, whose lives have been damaged. I ask you to do the same thing.”

He encouraged the young people to look to the cross and focus their prayers to lift up the survivors of clergy abuse.

To those going to Panama, he said “be great witnesses of God’s love. Be good examples of what it is to be a Houstonian and a Texan. Say ‘howdy’ to everyone. Be proud to be a Catholic Christian, and be willing to serve God in everything that you do every day of your life.”

The cross and the icon were on a nine-day tour across the U.S. Aug. 19-27. On the Palm Sunday immediately following each World Youth Day, the cross is transferred from the youth of that year’s host country to the youth of the country hosting the next celebration. Because Panama is such a small country, the current tour was expanded to include Central America, the Caribbean, and five U.S. cities: Chicago, Miami, Houston, Washington and Los Angeles.

In Washington, Aug. 25, a procession with the cross began at the steps of the Lincoln Memorial, where Panama Archbishop Jose Domingo Ulloa Mendieta welcomed pilgrims to the country for January’s celebration.

Neida Morales, a 19-year-old who traveled to Washington from North Carolina, is planning to go to Panama. She said she is looking forward to “getting closer to God, trying to figure out what’s my purpose in life” while there.

Similarly, Helen Trimble, a member of St. Mary of the Mills Parish in Laurel, Maryland, said she is “hoping to have a better idea of what I want to do with my life and what my calling is.”

As the throng prepared to process to several monuments along the National Mall, Archbishop Ulloa noted how the people remembered in the memorials helped build the United States.

“These people invite us to be different,” he said. “Christ, always young, is inviting us to leave our mark that makes history in the life of others. Let us be the protagonists of this history.”

As the young people processed down the National Mall, the pain of the sexual abuse crisis in the church was felt heavily. Members of the World Youth Day Cross Leadership Team said they planned to offer the procession “in prayer for the wounded state of Christ’s church, our city, and our world.”

In remarks to the young people, Auxiliary Bishop Roy Campbell Jr. of Washington said, “the cross that each of us bear has been made heavier by the recent terrible revelation of decades of sexual abuse of the people of God.”

He added that survivors of abuse “should not have to suffer by carrying the cross of suffering, humiliation or shame.” He encouraged participants to pray for those victims and to act as “instruments of God’s peace” to prevent future abuse.

Young adults from St. Dominic Parish in Washington were among those who carried the cross during the procession. The prayer intentions for that part of the journey were for those with disabilities and for those affected by the abuse scandal.

Christiana Gellert, a young adult from the parish, said she was “grateful for the opportunity to do a tiny bit of reparation” for all of the sins committed in the church.

Once the group had processed to the Martin Luther King, Jr. Memorial, Bishop Barry Knestout of Richmond, Virginia, reflected on the civil rights leader’s “I Have a Dream” speech, in which he was “speaking of a dream for racial harmony … a focus on the dignity of human persons and how that dignity should be reflected in all we say and all we do.”

The route also took participants to the Washington Monument and the Smithsonian Castle, where Auxiliary Bishop Mario Dorsonville of Washington reflected on the cross that immigrants have to bear.

“We can say, ‘I will help you,'” Bishop Dorsonville told the young people, encouraging them to listen to Pope Francis’ call to move from a culture of indifference to a culture of solidarity.