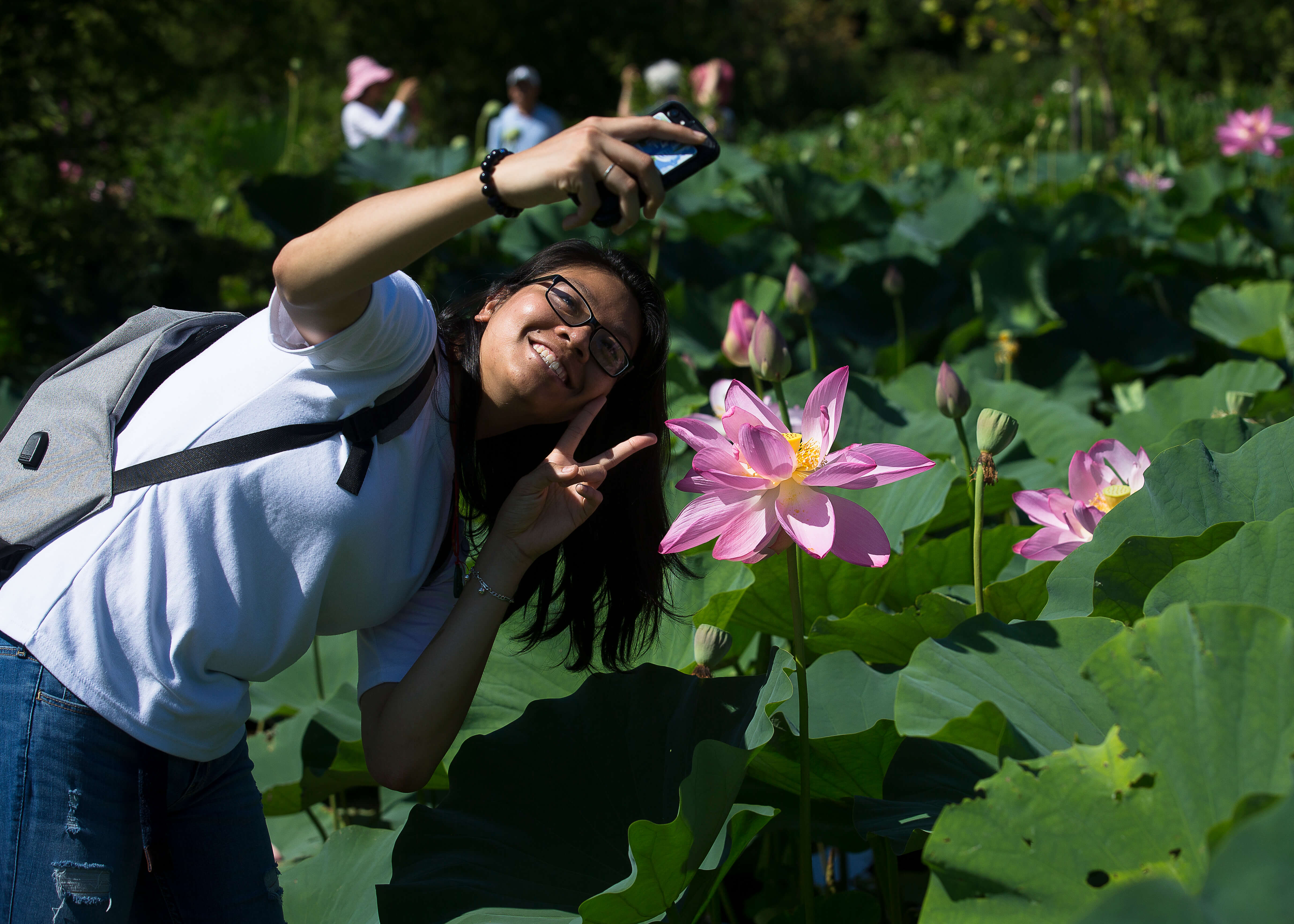 Photo Credit: CNS/Tyler Orsburn - A woman takes a selfie with a lotus flower at Kenilworth Aquatic Gardens National Park in Washington, D.C. Cardinal Peter Turkson, prefect of the Dicastery for Promoting Integral Human Development, said July 15 that the intensified demand for climate action by young people is a sign of hope during the planetary ecological crisis.

Young people’s intensified demand for climate action is a sign of hope during the planet’s ecological crisis, said Cardinal Peter Turkson, head of the Dicastery for Promoting Integral Human Development.

“There are so many signs of hope. God is raising up people around the world to come together to care for our common home. I am happy to note the role of young people in this journey,” the Ghanaian cardinal said July 15 in a speech delivered by Father Bruno Duffe, secretary of the dicastery, at a conference marking the fifth anniversary of the Catholic Youth Network on Environment and Sustainability in Africa and the fourth anniversary of Pope Francis’ environmental encyclical, “Laudato Si’.”

The cardinal described climate challenges as complex and multifaceted but said the pressure exerted by the students was being noticed by politicians, whom he said needed to show courage and make the decisions needed to fully implement the Paris Agreement, which seeks to limit the global temperature increase.

Cardinal Turkson said young people were the generation most threatened by the climate crisis. Also, they are part of the future generations that stand to inherit a severe damaged planet, if no clear action is taken, he said.

“Our children and grandchildren should not have to pay the cost of our generation’s irresponsibility. Your frustration and anger toward our generation is clear and understandable,” said the cardinal, urging the young people to raise their voices louder in the coming months, as heads of states gather in the U.N. Climate Action Summit in New York in September.

Nearly 350 young leaders from more than 50 countries attended the July 15-16 conference at the U.N. grounds in Nairobi. The meeting centered on “Laudato Si’,” which stressed the need to focus on the fragility of nature and the billions of impoverished people suffering due to human-induced environmental degradation. In the encyclical, Pope Francis said people must consider making personal choices that could contribute to the greater good, rather than the gratification of short-term desires.

Joyce Msuya, deputy executive director of the U.N. Environment Programme, underlined the urgency needed to tackle climate change while stressing — among other challenges — scientists warning that 1 million species are at risk of extinction. The Tanzanian microbiologist said 2019 was just over six months old, but it was already had the highest temperatures ever recorded. She also cited floods, prolonged droughts and rapid melting in the Arctic as some of the critical warning signs of changing climate.

“Our planet is sick. You might be surprised, then, to hear that the feeling I have as I stand here before you is this one: hope,” said Msuya.

“I find hope in the young women and men around the world who are drawing both faith and science to campaign for change and to raise awareness about how to live sustainably.”

At the meeting, Jassica Gimo, 25, of Beira, Mozambique, tearfully recalled the struggles and devastation of Cyclone Idai, which caused catastrophic damage in Mozambique, Zimbabwe and Malawi in March. Gimo stressed that it is possible to mitigate risks and avert climate catastrophes with adequate information.

“The lack of information made the (cyclone) damage worse. If we had the information on time, we would have moved to safer cities. I believe that the situation would be different and maybe the damage would be less,” she said.

Among other issues related to climate change, the participants discussed the scientific aspects, the role of faiths, indigenous people and forests in environmental protection.

Allen Ottaro, executive director of Catholic Youth Network on Environment and Sustainability in Africa, said as part of the “Laudato Si'” generation, the young people were taking the leading in caring for the planet.

“They are doing little things that count,” said Ottaro, while reminding people that Africa was at the forefront of crisis. “We have the opportunity to save the planet.”