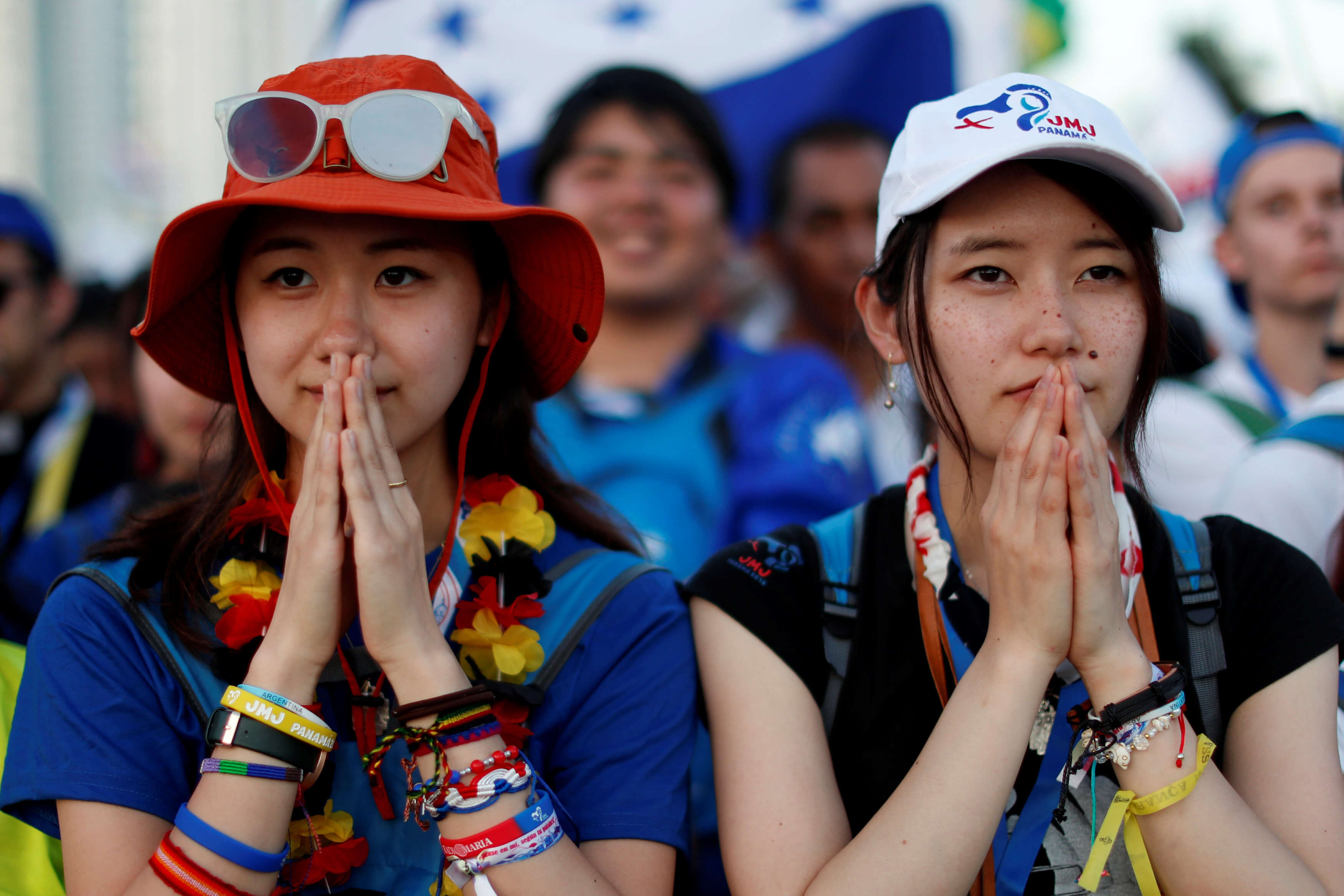 If there were a common denominator, aside from the Christian faith, that united most pilgrims heading to the opening Mass for World Youth Day 2019 in Panama, it was that each person, in his or her own way, faced a challenge back home.

Pilgrims from places such as El Salvador, Zimbabwe and the Dominican Republic spoke of increasing violence, political or otherwise, threatening their general populations. Others from places such as Australia and the United States spoke of growing secularism affecting the religious beliefs of their peers.

And yet, almost every one of them wore a smile and most importantly, many of them expressed the belief that most of the problems had a solution and that each could be overcome with a belief in a Christ who offers, not riches, nor power, but hope — to help themselves and to help others.

“I want to be ignited to give hope to more people,” said Jesuit Father Ignatius Padya, 34, who was traveling with a group of pilgrims from Zambia, Mozambique and his own country of Zimbabwe in southern Africa to the opening Mass Jan. 22 of the international event organized by the Catholic Church, which also welcomed other Christians and those of other religious or no spiritual beliefs.

One thing he realized, Father Padya told Catholic News Service, is that for people in Latin America, compared to those in Africa, “our histories and experiences are similar,” he said. He wanted the young pilgrims he traveled with to understand that just as Latin America has a history of pain, it also has a history of faith and beauty, and the people in the region have something to offer — and Africans, no matter what challenges they face, also have gifts to offer.

“As Catholics, I want them to share what they have and to get something from them,” said Father Padya. “I want them to go home and do more for God.”

The theme of the 2019 World Youth Day, the first Marian one used in the event’s history, encouraged that attitude: “I am the servant of the Lord. May it be done to me according to your word,” recalling Mary’s response to God.

It’s exactly that kind of giving of oneself that attracted Valeria Lopez of Mexico to attend the event in Panama, she said.

“I want to fill myself with that love,” she said, walking fast en route to listen to Panamanian Archbishop Jose Ulloa Mendieta, who celebrated the opening Mass in Panama City’s Campo Santa Maria la Antigua.

Mary, the archbishop said, “was posed to you as a model of valor, courage, who made herself available to comply with God’s plans, the ones which he had selected for her and whose answer is the motto of this World Youth Day.”

For 24-year-old Matthew French, that call means helping out more in his Diocese in Australia’s Central Coast, perhaps in chaplaincy, but also in encouraging a sense of a faith community in a country that faces challenges with secularism.

“Like most Western countries, it’s not great,” he said about the religious scene of Australia, although the 2008 World Youth Day held in his country “galvanized people.”

Likewise, Archbishop Ulloa, in his opening homily, expressed hope that the gathering in Panama this year would offer something similar, a “balm,” he called it, for the problems facing teens, adolescents and young adults in what he called the “existential and geographic peripheries.”

He called particular attention to ethnic youth, indigenous and those of African descent, as well as those who face forced migration for a variety of reasons that expose them to dangerous situations such as human trafficking, drugs, delinquency and other social ills, he said.

He wanted them to know, he said, that they were important and they were the reason for an enormous effort of human mobilization that allowed their pilgrimage to happen.

“Thanks to your presence, this country is now the capital of the youth of the world, one where, with human warmth, and also the warm climate typical for this time of year, create favorable conditions so that you can mingle with your peers, share dreams, hopes and projects, that, by the force of the Holy Spirit, can help you make a revolution of love possible, which will not be easy, but neither will it be impossible, if we place our trust in God,” he said.

Panamanian parishes and homes where many of the pilgrims were welcomed received training to give a welcoming that offered “the best we have, love, closeness, fraternity, to adopt you as a true family, the family of God.”

What the archbishop said weren’t mere words to give the pilgrims a good feeling. Cars, trucks, motorcycles honked and yelled good wishes at pilgrims who walked through the streets of Panama City. Welcome groups in the streets high-fived them and citizens offered warm greetings whenever they spotted them wearing their red, white and blue T-shirts with “JMJ” written on them, the initials in Spanish for Jornada Mundial de la Juventud, or World Youth Day.

But the archbishop also acknowledged the real problems some of them faced. Many of the young Central Americans, he said, come from indigenous communities or are descendants of Africans — significant populations of the continent who live largely excluded and discriminated against, leading to lives of poverty on the margins of society.

It was a message pilgrim Mildred Garcia, of San Cristobal, Dominican Republic, understood well because she sees some of that in her peers, she said, and as they experience exclusion, they’re also drawn away from the church and toward delinquency, sometimes looking for escape, she said.

For her, faith is the anchor, she said, and World Youth Day this year was about renewing that faith.

Archbishop Ulloa said it was his hope that the church’s teachings, the sacraments, the kinship of the upcoming days would bring about an encounter with Jesus Christ for those facing challenges and help them confront certain feelings within, particularly the “anti-values” of a system that offers a false sense of happiness.

“One that leads to experiment desperately with so many things that damage the mind and the spirit, but in the end cannot fill the existential void,” he said.

Just as in the time of Christ, young people today seek “witness,” he said, and offered those at the Mass an array of models from Latin America: St. Martin de Porres, St. Rosa of Lima, St. Juan Diego, St. Jose Sanchez del Rio, St. Juan Bosco, Blessed Sor Maria Romero Meneses, and the most recent one: St. Oscar Arnulfo Romero. All of them show, he said, that a life of sanctity is possible in all cultures, in all ethnicities, without regard to gender, nor age. A giving of one’s life for God and neighbor is the road to sanctity, he said. Saints, he said, defend the defenseless: the unborn, the one born in misery, migrants.

A saint, he said, “seeks justice, prays, lives and loves the community, is happy, has a sense of humor, always is in the struggle, leaves mediocrity behind, lives the mercy of God and shares it with the neighbor.”

He told them not to be afraid of that kind of sainthood. A saint is not one chosen simply to place a face on a prayer card. A saint goes against the current, he said. And this is what the pilgrimage of World Youth Day is about.

“Don’t be afraid, be courageous to be a saint in today’s world,” he concluded. “You’re not renouncing your youth or happiness.”

Finally, he implored: “Keep making the adults nervous, keep detaching yourselves from the things that tie us down and won’t let us be true Christians.”