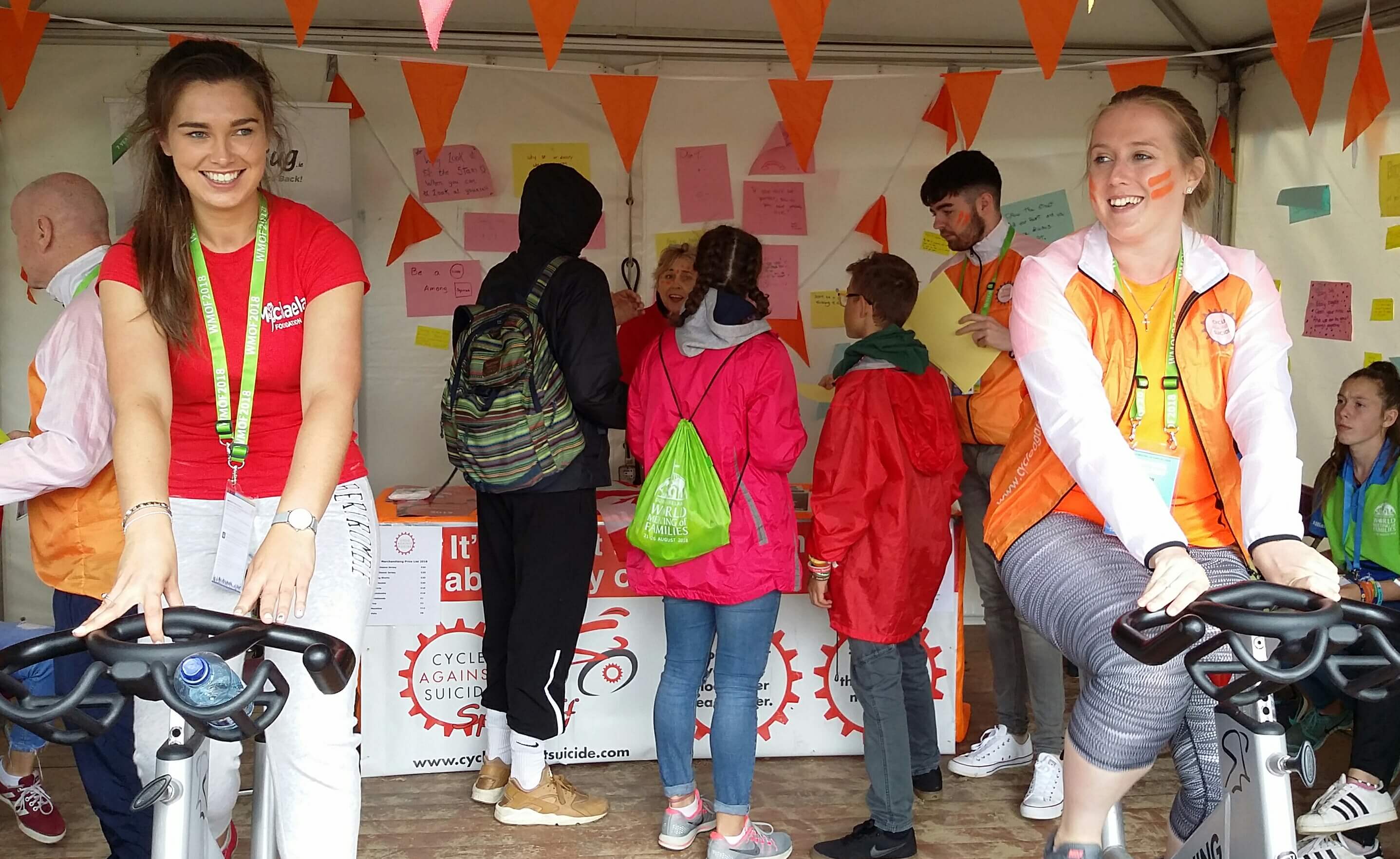 Organizers of the World Meeting of Families wanted a youth-only area where teens could listen to live music, talk about what’s on their minds and just have some “crazy fun.”

“We wanted to animate the hearts and minds of our young people,” said Dermot Kelly, coordinator of the Teen Global Village, which spans a large outdoor area at the Royal Dublin Society, site of the pastoral congress for this year’s World Meeting of Families. The village has hosted some 1,000 teens per day during the Aug. 22-24 gathering.

Kelly, who for the past eight years has served as youth director for Northern Ireland’s Archdiocese of Armagh, set out to “create a festival atmosphere” that would invite both dialogue and evangelization.

“Teens want to belong, and their spirituality is as high as ever,” said Kelly, noting that an Aug. 23 workshop allowed bishops to “actually hear the voices of our young people and help prepare the bishops” for the October synod, which will focus on young people, faith and vocational discernment.

Noting that social media is often dismissed as “a modern-day devil,” Kelly remains enthusiastic about its use. “It’s an amazing tool of evangelization for youth, even if they’re just liking or viewing something,” he said.

The Teen Global Village also offered several workshops and displays on mental health and self-esteem. Allison Leetch of Cycle Against Suicide, an exhibitor at the village, said 25 percent of young males in Ireland between the ages of 18 and 25 struggle with mental health issues and, according to recent statistics, there are 800 suicides per year in Ireland.

Leetch, a full-time schoolteacher in Dublin, serves as the national coordinator for Cycle Against Suicide’s school program, which trains students to identify and address conditions such as anxiety, depression and obsessive-compulsive disorder. The organization runs an annual 10-day cycling tour through Ireland to raise awareness of mental health disorders and suicide prevention.

At the village display, Leetch and her team provided two stationary spin-cycles to give participants a chance to stretch their legs and their spirits.

“We want kids to know they can come to us here in the village, and to talk to us and to find out who they can talk to in their own countries for support,” she said. “Our motto is that ‘it’s OK not to feel OK, and it’s absolutely OK to ask for help.'”

Opposite the CAS display, Orlagh McClinton of the Michaela Foundation worked to enhance teen girls’ self-image by cultivating “an attitude of gratitude.”

“We’re teaching them to appreciate the things they have and to develop a positive body image,” said McClinton.

Based in Northern Ireland, the Michaela Foundation sponsors five-day summer camps throughout Ireland for girls 11 to 15. During the sessions, participants learn how to “follow their own path” through activities and projects that explore faith, culture, fashion and fun.

Zoe McConnell, 19, of Belfast, Northern Ireland, said she felt it was important for young people to attend the World Meeting of Families and to explore its youth offerings.

“It’s the youth that carry on the faith,” said McConnell. “If it doesn’t carry on with the younger members, it will die out, and we don’t want that.”

McConnell also observed that young Catholics in Ireland are especially called to witness to their beliefs.

“As we’ve moved toward more of a secular society, where youth are pushing for equality among everyone, we have to let them know that the Catholic faith already encourages that equality,” she said.

Stephen Walsh, also from Belfast, agreed that teens have a vocation to evangelize and to remain in dialogue with church leaders.

“We are the next generation of people coming through, so it’s very important that we do get our say in what our youth is like in the church,” he said. “This helps us proclaim our faith and share it with others.”