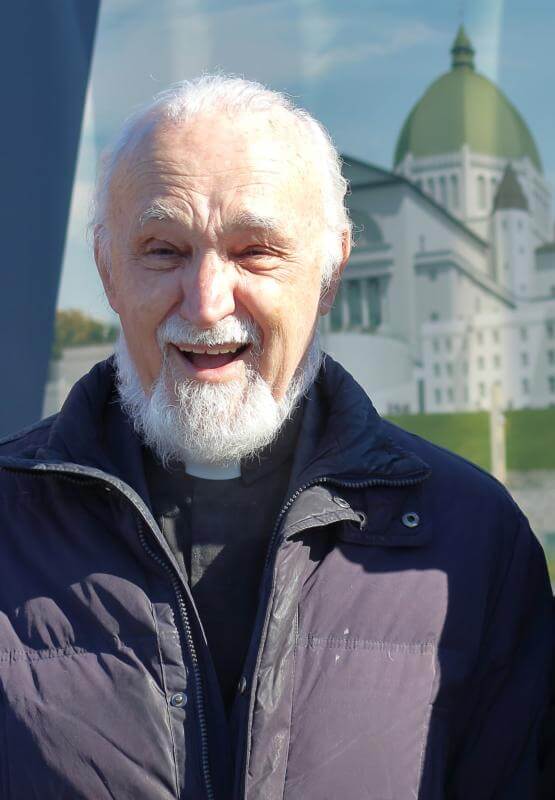 Photo Credit: (CNS photo/Francois Gloutnay, Presence) - Father Claude Grou, rector of St. Joseph's Oratory in Montreal, seen June 4, 2018, was wounded March 22, 2019, after being stabbed during a televised Mass in the crypt of the oratory.

Father Claude Grou, the rector of St. Joseph’s Oratory of Mount Royal who was stabbed during a Mass March 22, has been released from the hospital.

Vlad Cristian Eremia, the 26-year-old suspect in the attack, which was caught on film, is accused of attempted murder. Prosecutors and the defense agreed he should have a psychiatric evaluation. The judge sent him to the Institut Philippe-Pinel for the evaluation; he is scheduled to return to court April 26.

After his release March 23, Father Grou issued a statement of thanks for all the messages of support.

“My health is good and I’m recovering from my emotions,” he said. He called the messages heartwarming and said they allowed him “to face these difficult moments serenely.”

“I pray that St. Joseph’s Oratory will remain a place of welcome, prayer, calm and peace as it has been for over 100 years, and I look forward to returning to work,” he said. He added that he holds “no resentment” against the suspect, and wishes him “peace.”

During the 8:30 a.m. Mass in the crypt March 22, a tall, light-skinned man wearing a white hat walked toward Father Grou and stabbed him in the stomach.

“At the end of the psalm, just before the … Gospel, there is this guy who comes from who-knows-where — I only film the front of the crypt — and who moves rather quickly,” said Dinh Khoi Vu, who directed the morning Mass at the Oratory for Salt and Light Television.

“Father Grou saw him coming with his knife. He had the reaction to move to the side, but he was still touched,” he added.

“The knife fell. The aggressor was no longer able to pick it up. Many faithful rushed to hold him back. ”

Father Grou got up, and members of the security service managed to control the attacker.

Fifty people were gathered in the crypt of St. Joseph’s Oratory.

“He was sitting. He was conscious, “said Celine Barbeau, spokeswoman for the oratory.

Father Grou, 77, is a native of St. Laurent, Quebec. He joined the Holy Cross Congregation in 1966 and was ordained to the priesthood in 1968. He was elected as the congregation’s superior general in 1986, an office he held until 1998. Since leaving that post, he has been working at St. Joseph’s Oratory, Canada’s largest church founded by St. Andre Bessette.

“We are all shocked by this act of violence that has taken place in our city, in a space dedicated to peace,” Montreal Archbishop Christian Lepine said in a statement. “We know that places of worship of many religions are targets of acts of violence. We must continue to follow the path of peace and love, believing that good will overcome evil through prayer and good works.”

Archbishop Lepine thanked the first responders to the scene, “especially those who courageously protected Father Grou.”

He also encouraged everyone to “remain calm” and “continue celebrating their faith as a community.”

Prime Minister Justin Trudeau tweeted his reaction to the assault: “What a horrible attack at St. Joseph’s Oratory in Montreal this morning. Father Claude Grou, Canadians are thinking of you and wishing you a swift recovery.”