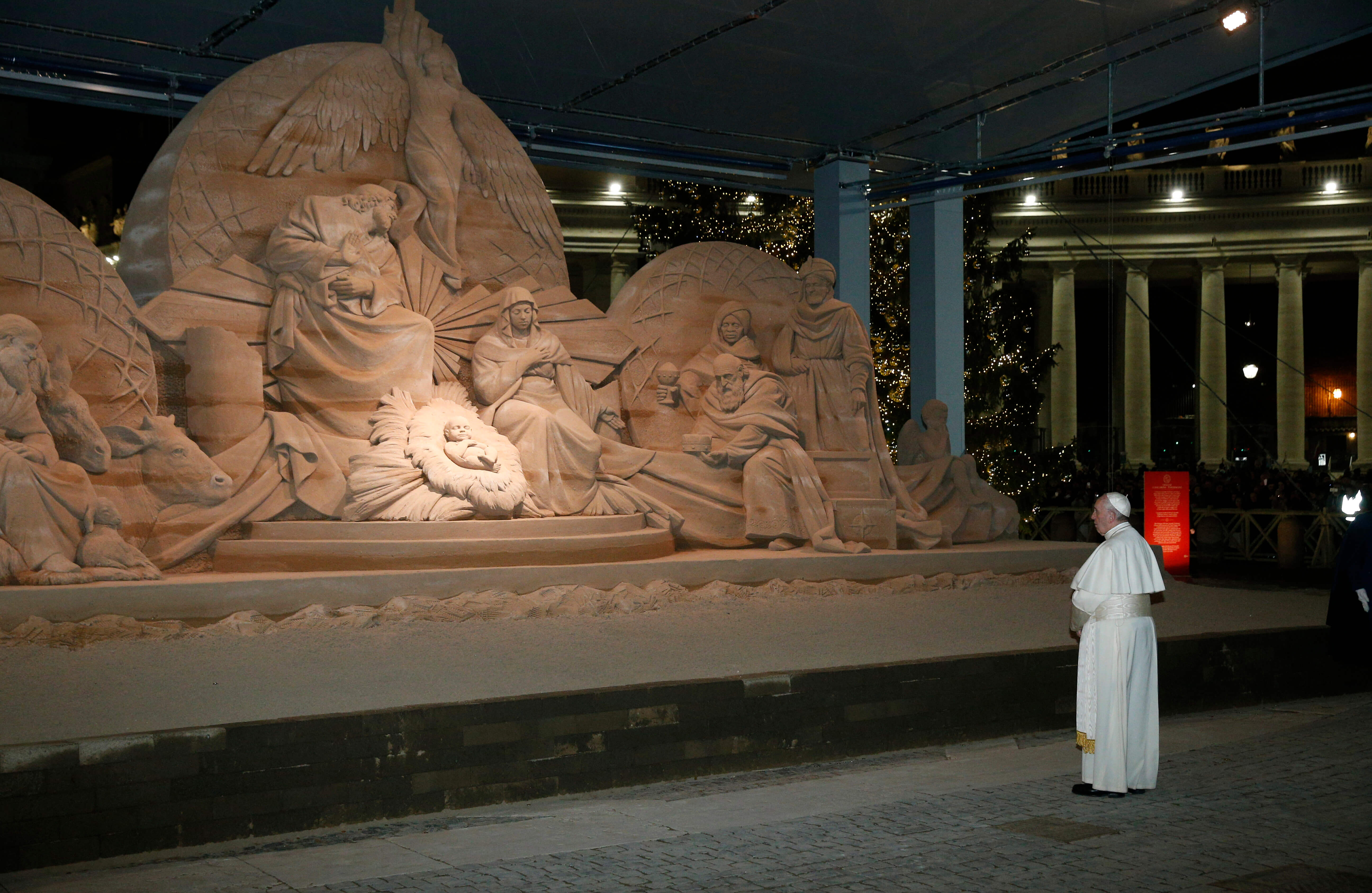 The end of one year and beginning of next naturally leads people to think about the passing of time and about love, which gives time — and everything else — real meaning, Pope Francis said.

To mark the end of 2018, Pope Francis led an evening prayer service Dec. 31 in St. Peter’s Basilica. The service included the singing of the “Te Deum” (“We praise you, oh God”) in thanksgiving for the blessings of the past year, as well as Eucharistic adoration and benediction.

In his brief homily during the service, the pope focused on two lines from Galatians 4: “When the fullness of time had come, God sent his Son, born of a woman, born under the law, to ransom those under the law, so that we might receive adoption.”

The lines, he said, are a “synthesis of the New Testament” and give “meaning to a critical moment like the passing of a year.”

The time when one year ends and a new one begins makes many people “feel the need for something that fills the passing of time with meaning. Something, or better, someone,” he said.

For Christians, that someone is Christ, the chosen one sent by God, God’s only son, he said.

Through his life, death and resurrection, Jesus unleashed “an unheard-of power that still lasts and will last through all of history,” the pope said. “This power is called love. It is love that gives fullness to everything, including time. And Jesus is all of God’s love concentrated in a human being.”

The reading from Galatians, he said, also speaks of Jesus’ mission, which is to “ransom” people, free them from “a condition of slavery and restore to them liberty, dignity and the freedom proper to sons and daughters” of God.

“God the father sent his only begotten son into the world to uproot from human hearts the ancient slavery of sin and, by doing so, restore their dignity,” he said. “In fact, as Jesus teaches in the Gospel, from the human heart come all evil intentions, the inequity that corrupts life and relationships.”

With that realization, he said, Christians should stop and reflect “with pain and repentance,” acknowledging how even in 2018, “many men and women lived or are living in slave conditions unworthy of the human person.”

With Rome Mayor Virginia Raggi seated in the front row, Pope Francis noted how even in Rome there are people living in horrible conditions.

“I am thinking in particular of the homeless — more than 10,000 of them,” the pope said. “They are all sons and daughters of God, but various forms of slavery, often very complex, have brought them to a life on the edges of human dignity.”

While Jesus, too, was born in a place not fit for human habitation, he said, the choice of a manger in Bethlehem was not an accident. “He wanted to be born that way to manifest God’s love for the little ones and the poor.”

Jesus’ humble birth “sowed in the world the seeds of the kingdom of God, the kingdom of justice, love and peace where no one is a slave, but all are brothers and sisters, children of the one Father.”

With Dec. 31 being the vigil of the feast of Mary, mother of God, Pope Francis noted how the church continues her maternal concern and care through the work of many institutions and volunteers who assist the homeless and people subjected to a variety of forms of slavery.

Contemplating “the divine maternity of the virgin Mary,” he said, Christians recognize that “God was born of a woman so that we could receive the fullness of our humanity, adoption as children. By His abasement, we were raised up. From His smallness came our greatness. From His fragility, our strength. From Him making Himself a slave came our liberation.”

“What would you call all of this if not love?” Pope Francis asked, adding that it is for that love that the Church raises a hymn of thanks to God at the end of the year.