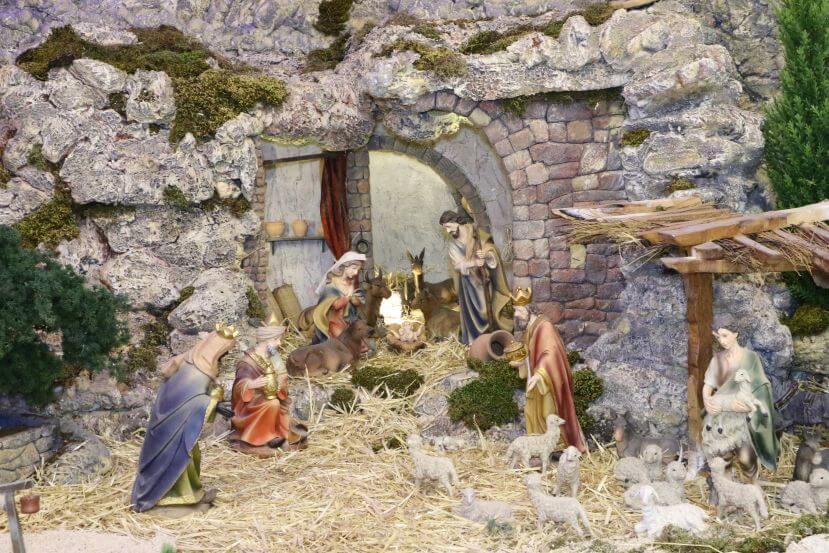 Photo Credit: CNS photo/Johnny Antoun - A manger was part of a sprawling, rustic miniature village creation for Christmas at City Mall in Beirut.

The crèche and the gap

For the past decade or so, I’ve been assembling a mid-sized Judean village of Fontanini crèche figures, including artisans, herders (with sheep), farmers (with chickens and an ahistorical turkey), vintners, blacksmiths, musicians, weavers, and a fisherman or two (one awake, another sleeping). Like the colossal Neapolitan crèche at the basilica of Saints Cosmas and Damian in Rome, it’s a reminder that the Lord Jesus was born in the midst of humanity and its messy history: the history that the Child has come to set back on its truest course, which is toward God. The messiness of history is a caution against letting sentimentality take over Christmas; so are some challenging truths about Mary, Joseph and their place in what theologians calls the “economy of salvation.”
Why challenging? Because Mary and Joseph were called to both form their son in the faith of Israel and then give up, even renounce, their human claims on Him, so that He might be what God the Father intended a the world needed.

When Luke tells us that Mary kept all that had happened to her and to her boy “in her heart” (Lk 2:52), we may imagine that she was pondering what the Swiss theologian Hans Urs von Balthasar once described as a great detachment: at His birth, Jesus “detached himself from her in order to tread his way back to the Father through the world.” Some will welcome the message He will preach along that messianic pilgrimage; others will be resistant. And that resistance (in which the Evil One will play no small part) will eventually lead to Calvary, where the sword of sorrow promised by ancient Simeon in Luke 2:35 will pierce Mary’s soul. Then, in the tableau at the foot of the Cross, as captured by Michelangelo in the Pietà, Mary will offer the silent affirmation of God’s will to which she once vocal assent at the Annunciation: “Be it done unto me according to your word” (Lk 1:38).

The last recorded words of Mary in the New Testament – “Do whatever He tells you” (Jn 2:5) – underscore that the role of Mary, who receives the Incarnate Word of God at the Annunciation and gives birth to Him in the Nativity, is always to give her Son away: to point beyond herself to Him, and to call others to obedience to Him. Thus what Balthasar described as a “detachment” applies to Mary as well as to Jesus: Mary detaches herself from whatever her own life-plans might be, and from whatever her maternal instincts to keep her Son close might be, in order to fulfill the vocation planned for her from the beginning – to be the model of all Christian discipleship, which is the abandonment of my will to God’s will for my life.

Then there is Joseph, another model of self-gift and self-renunciation. Hans Urs von Balthasar again: “In the background of this scene of birth there also stands Joseph, who renounces his own fatherhood and assumes the role of foster father assigned to him. He provides a particularly impressive example of Christian obedience, which can be…very difficult…to accept, especially in the physical sphere. For one can be poor by having given everything away once and for all, but one can be chaste only by a daily renunciation of something which is inalienable to man.” And that makes Joseph a model for those who struggle daily to live, by grace, the truths they affirm about human love.

“Mind the gap” is the ubiquitous instruction found on the London Underground, cautioning passengers against stepping between the train and the platform. It’s also a pithy but accurate description of the drama of the Christian life. For we all live, daily, in the “gap” between the person I am and the person I was called to be at baptism. The quotidian effort to minimize that “gap,” which means cooperating with God’s grace, is the warp and woof of the spiritual life. So the complement to the Fontanini characters surrounding our family crèche – each of whom represents a personal and unique “life in the gap” – is a small “Mind the Gap” Christmas ornament on our tree. For the Child born in Bethlehem is the bridge across the gap, and the angels atop the tree announce his birth.

A blessed Christmas to all.