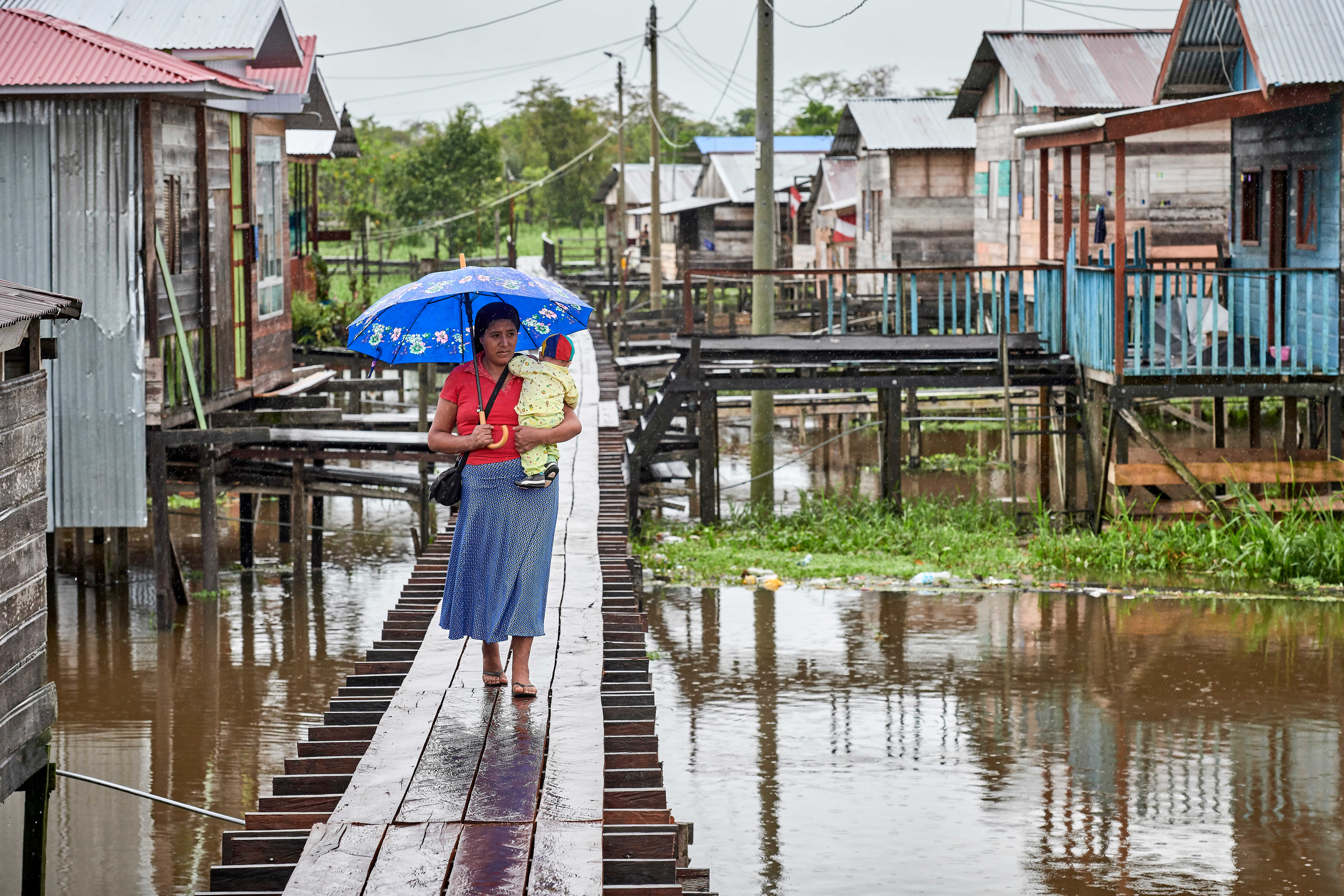 Photo Credit: CNS/Paul Jeffrey - Carrying a child, a woman walks along a raised sidewalk in Islandia, a town in the Peruvian Amazon.

When Pope Francis came face to face with more than 2,000 Amazonian indigenous people in Peru in January 2018, he told them the place where they live is holy ground, and that they and the Amazon region are important to the Catholic Church and the entire world.

For most of October, more than 100 bishops will meet at the Vatican to wrestle with what that means for the church’s ministry in a politically, culturally and ecologically complex region where indigenous people face increasing threats.

The task for the bishops at the Synod of Bishops for the Amazon is to lay out, as the synod’s title puts it, “new paths for the church and for an integral ecology.” The decisions they make will reverberate not only in the Amazon region, but elsewhere in the world.

Pope Francis is calling for a Church with “an Amazonian face — not a white face, but the face of the indigenous person, the river dweller, the black person, the person of mixed race,” said retired Bishop Erwin Krautler of Altamira, Brazil.

The diversity of faces reflects the complexity of issues in the region.

The Amazon region covers an area more than five times the size of Alaska. Although most of it is in Brazil; eight other countries share parts of the region. The national boundaries, which are generally heavily forested and far from capital cities, are often lawless areas where drug traffickers, human traffickers, illegal loggers and illegal miners operate with impunity.

Even away from borders, areas inhabited by indigenous people are coveted by miners, loggers and ranchers eager to expand into the Amazon region. Community leaders who speak out and defend their territories risk harassment, death threats and assassination.

At least 300 indigenous groups live in the region. A single parish may include scores of widely scattered villages accessible only by boat, and it could take several weeks to reach the most distant community. The difficulty and expense of travel, and the relatively small number of priests and sisters, makes it virtually impossible to visit communities frequently.

As a result, unless they live in cities or in towns where a parish team lives, Catholics in Amazonia have little access to the sacraments. In some places, a priest visits only once a year, celebrating the Eucharist, marriages and baptisms. Some communities almost never see a priest.

That is likely to be a key point on the synod agenda. The working document contains a proposal for a type of ordination for village elders who are in stable relationships. They would not have all the attributes of priests, but they would be able to preside over eucharistic celebrations.

When the synod document was released, that proposal grabbed headlines worldwide, as some observers saw it as a first step toward allowing married priests. But the pope has said that is not on the table, and the document make clear that the functions of the ministers would be limited to celebrating the Eucharist for Amazonian Catholics.

The bishops are also likely to explore new roles for women in the church in the Amazon region. The document calls for them to “identify the type of official ministry that can be conferred on women, taking into account the central role that they currently plan in the Amazonian church.”

Pope Francis announced the synod in 2017 and launched it with an initial meeting in January 2018, during his visit to the town of Puerto Maldonado, in the Peruvian Amazon. More than 40 assemblies were then held in church jurisdictions throughout the Amazon, so Catholics in the nine countries could discuss the issues that most affect them.

Those topics — ranging from threats from oil production and mining to alcohol and drug addiction and domestic violence -— were included in the synod working document and are likely to be discussed when the bishops meet.

As one of the most biologically diverse areas of the earth, the Amazon region has given rise to great cultural diversity. About 3 million of its 31 million inhabitants are indigenous.

Throughout Latin America, indigenous people generally are among the poorest. The lack of jobs and decent schools in their villages spurs steady migration from rural areas to cities, where indigenous people face discrimination and struggle to maintain their traditions.

At the synod, the bishops are also likely to consider new forms of urban ministry, especially ministry among indigenous people who have settled in cities.

Another group of Amazonian people who suffer prejudice are those of African descent. In Brazil, before slavery was abolished in 1888, some slaves escaped and fled into the forest, forming communities called quilombos. Their territorial rights are even more precarious than those of indigenous people, because the quilombos lack official recognition as traditional communities.

Pope Francis is not the first pontiff to focus the Church’s attention on the Amazon. In an encyclical to the bishops of Latin America in June 1912, Pope Pius X decried the slavery and brutality that accompanied the rubber trade, in which tens of thousands of indigenous Amazonians died.

Bishops from Church jurisdictions in the Brazilian Amazon have gathered periodically since 1954, Bishop Krautler said. When they met in 1972 in the Amazonian city of Santarem, Pope Paul VI sent a message of support.

When the bishops from Latin America and the Caribbean met in the Brazilian city of Aparecida in 2007, they discussed environmental issues, and a section on the Amazon was included in the final document of that assembly.

The synod will continue that trend, this time highlighting the importance of the Amazon region for the universal church, Bishop Krautler said.

“It will be a great event of dialogue, of discussion, of proposals,” he said. “We do not hope for pious counsel from the synod. We hope that the synod will be a source of renewed impetus for the church throughout the world.”

First in a 13-part series