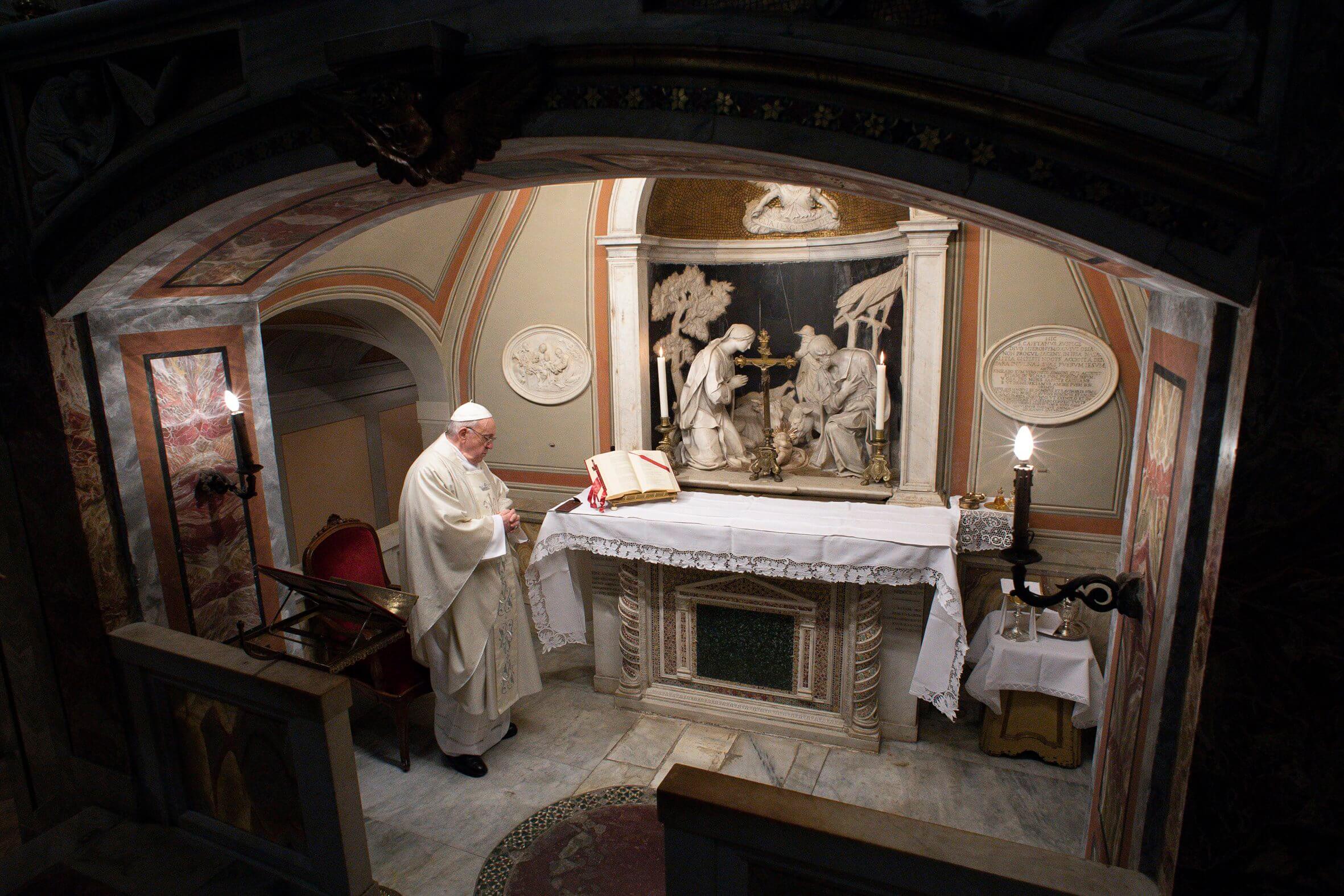 Photo Credit: CNS/Vatican Media - Pope Francis celebrates Mass in the Chapel of the Nativity Scene at the Basilica of St. Mary Major in Rome Dec. 8, the feast of the Immaculate Conception.

Say ‘no’ to sin, ‘yes’ to grace, pope says on Immaculate Conception feast

Mary’s Immaculate Conception offers a glimpse to the promised life for all Christians who open their hearts to God and his grace, Pope Francis said.

Addressing pilgrims in St. Peter’s Square on the feast of the Immaculate Conception Dec. 8, the pope said the grace “to be totally free from sin” is a gift from God and the “fullness of holiness” given to Mary from the beginning.

“And what Mary had from the beginning will be ours in the end, after we have passed through the purifying ‘bath’ of God’s grace. What opens the gates of paradise to us is God’s grace, received by us with faithfulness,” he said.

In the early morning, the pope visited the Spanish Steps privately to pay homage to the Immaculate Conception at a Marian statue atop a tall column. Customarily, the pope, accompanied by hundreds of people, would pray before the statue every year.

However, the Vatican announced Nov. 30 that the pope would “make an act of private devotion” due to the coronavirus pandemic and avoid the risk of infection that would be caused by a large gathering.

The pope prayed silently before the famed statue, which was erected in 1857 to commemorate Pope Pius IX’s declaration three years earlier of the dogma that Mary was conceived without sin. After he departed, Rome firefighters used a truck and tall ladder to hang a ring of flowers and a rosary from the statue’s outstretched arm.

In a statement released Dec. 8, Vatican spokesman Matteo Bruni said that after leaving the Spanish Steps, the pope visited in the Basilica of St. Mary Major, where he prayed before the icon of Mary “Salus Populi Romani” (“health of the Roman people”) and celebrated Mass in the chapel of the Nativity.

After praying the Angelus prayer, the pope said that although the public could not be present for the laying of flowers at the statue of Mary, it “does not impede us from offering our mother the flowers that please her most: prayer, penance and a heart open to grace.”

In his main talk, the pope reflected on the Marian feast day that “celebrates one of the wonders of the story of salvation.”

“Even she was saved by Christ, but in an extraordinary way,” the pope said, because God wanted the mother of his son to “not be touched by the misery of sin from the moment of her conception.”

The pope said Christians must remember that to pass “through the narrow door” that leads to paradise, they must first be mindful of their faults and open their hearts to God.

“Do you know who is the first person we are sure entered paradise? Do you know who? A ‘ruffian;’ one of the two who was crucified with Jesus,” he said. “Brothers and sisters, God’s grace is offered to everyone; and many who are the least on this earth will be the first in heaven.”

He warned the faithful not to take advantage of the Lord’s patience by continually postponing “a serious evaluation of one’s own life” and thus, be unable to obtain God’s grace.

“We may be able to deceive people, but not God,” the pope said. “He knows our hearts better than we ourselves do. Let us take advantage of the present moment!”

Pope Francis urged the faithful to “seize the day” by saying “‘no’ to evil and ‘yes’ to God” and “to once and for all stop thinking of ourselves, dragging ourselves into hypocrisy and to face our own reality as we are.”

“And this, for us, is the path for becoming ‘holy and immaculate,'” the pope said. “The uncontaminated beauty of our mother is incomparable, but at the same time it attracts us. Let us entrust ourselves to her and say ‘no’ to sin and ‘yes’ to grace once and for all.”