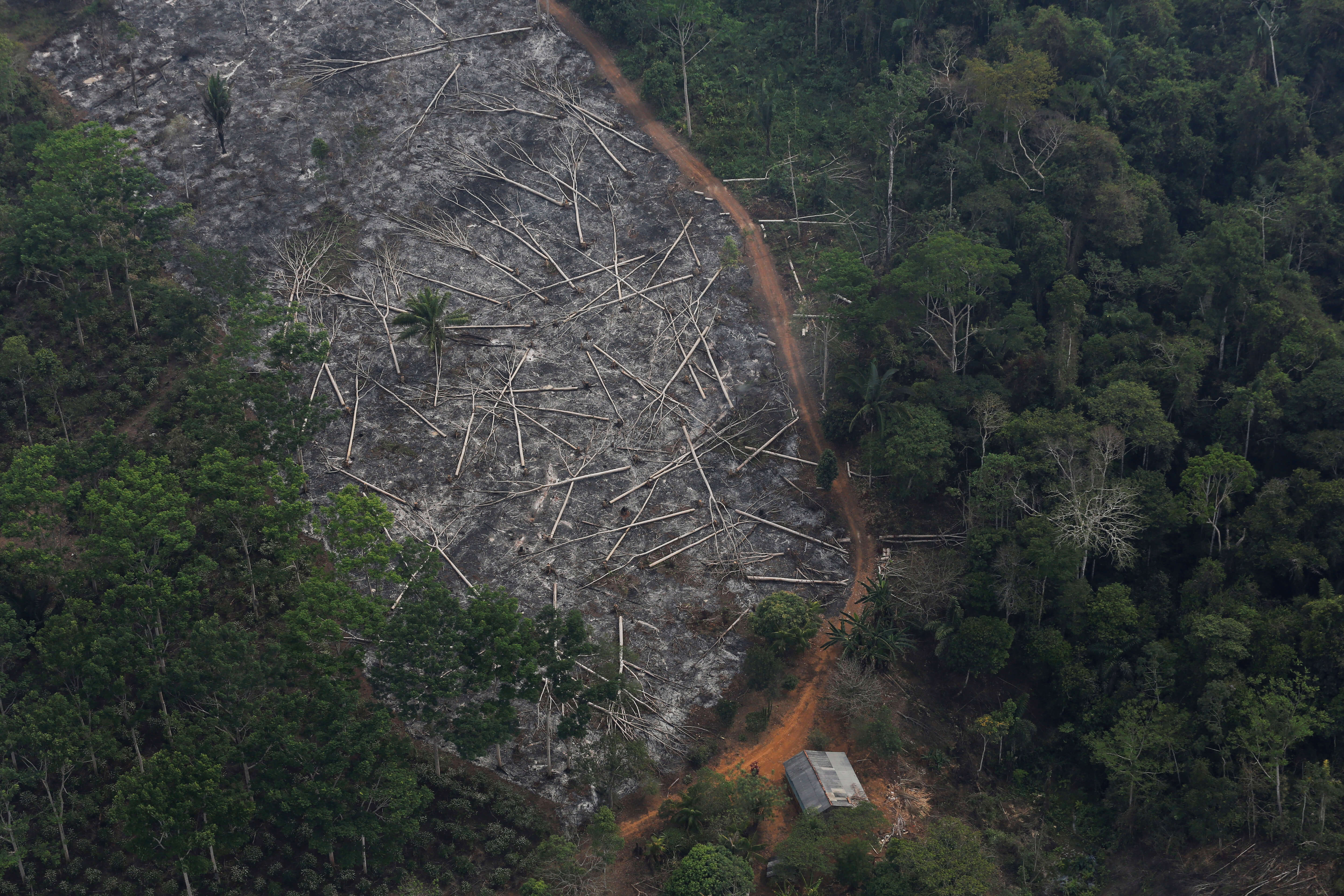 Photo Credit: CNS/Nacho Doce, Reuters - This is an aerial view of a deforested plot of the Amazon at the Bom Futuro National Forest in Porto Velho, Brazil, in 2015. In a message sent in early July to participants of an Italian conference on the consequences of deforestation in the Amazon, Pope Francis said the current situation in the South American rainforest "is a sad paradigm of what is happening in many parts of the planet."

Praising God for gift of creation leads to respect for it, pope says

Human beings are called to praise God for his gift of creation, not be predators out to plunder the Earth and all it contains, Pope Francis said.

In a message sent July 8 to participants of an Italian conference on the consequences of deforestation in the Amazon, the pope said the current situation in the South American rainforest “is a sad paradigm of what is happening in many parts of the planet.”

It is “a blind and destructive mentality that prefers profit to justice; it highlights the predatory attitude with which men and women relate to nature,” he said. “Please do not forget that social justice and ecology are deeply interconnected.”

According to its website, the international forum sponsored by the Laudato Si’ Community, an association inspired by the pope’s encyclical on the environment, reflected on the Amazon as “the key to ‘ecological conversion'” in order to obtain a “better understanding of integral ecology and obtain the knowledge of living in harmony with creation.”

The conference took place in the central Italian town of Amatrice, which was devasted in 2016 after a 6.2 magnitude earthquake struck the region. Amatrice was the hardest-hit town, accounting for 234 of the estimated 290 deaths, according to the Italian Civil Protection office.

In his message, the pope said the conference’s location was “a sign of hope” as well as a “sign of closeness to so many brothers and sisters who still live at the crossroads between the memory of a frightening tragedy and a reconstruction that is slow to take off.”

Regarding the conference’s theme, the pope said the deforestation and exploitation of the Amazon and its inhabitants has brought thousands of men and women to their knees and forced them to “become foreigners in their own land, deprived them of their own culture and tradition and broke the balance that united these peoples to their land for millennia.”

Citing St. Paul VI’s encyclical on integral human development, “Populorum Progressio,” the pope said that humankind can no longer “remain an indifferent spectator in the face of this destruction, nor can the Church remain mute: the cry of the poor must resound.”

Pope Francis also offered three attitudes for the conference participants to reflect upon when discussing the care of the environment. The first word, doxology — the liturgical formula of praise to God — is the attitude that all men and women must have before the beauty of God’s creation.

“Praise is the fruit of contemplation, contemplation and praise lead to respect and respect becomes almost veneration before the goods of creation and its creator,” the pope said.

An attitude that is eucharistic, he continued, helps men and women grasp the gift of life and recognize that “everything is given to us free of charge, not to be looted or devoured but to be a gift meant to be shared, a gift to be given.”

Finally, an ascetic attitude toward the environment is important so that people may “know how to give up something for a greater good, for the good of others.

Asceticism, Pope Francis said, “helps us to convert a predatory attitude — that is always lurking — into sharing, building a relationship that is ecological, respectful and kind.”