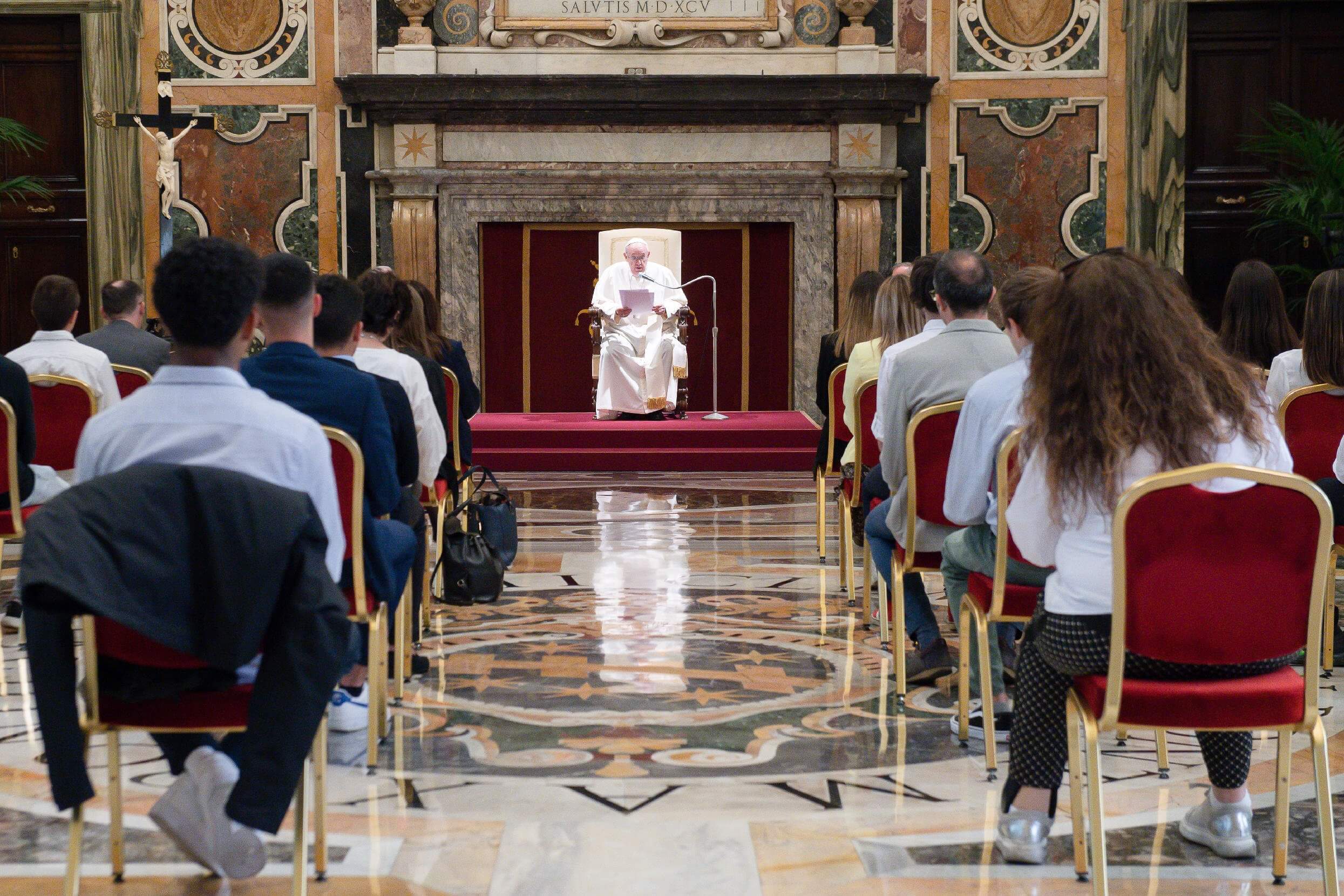 Photo Credit: CNS/Vatican Media - Pope Francis addresses faculty and students of the Ambrosoli Institute in Codogno, Italy, during an audience at the Vatican May 22. Meeting people from Codogno, the earliest epicenter of the Covid-19 outbreak in Italy, the pope praised them for not losing hope. He also asked that they rediscover the importance of in-person relationships.

After going so long without in-person learning and face-to-face contact with others, young people now should be more discerning and judicious concerning their time online, Pope Francis told students.

Having grown up in a digital world, they know the many new ways that have been opened up to them when it comes to learning and communication, the pope said during a private audience at the Vatican May 22 with a group of students and administrators from an Italian public high school.

“Yet we already know very well that there is the danger of closing oneself off and of always seeing reality through a filter, which only seemingly expands our freedom,” he said.

The pope asked the students to make sure that the pandemic’s forced “abstinence” from physically being with friends and others help them develop an even more “critical sense in the use of these (digital) tools so that they remain just that — instruments, subject to our intelligence and will.”

The students were from the “Ambrosoli” vocational high school in the small northern city of Codogno, where the first locally acquired case of Covid-19 had been diagnosed in Italy.

Known as “Patient 1,” a hospitalized 38-year-old man was found positive for the coronavirus Feb. 21, 2020, presaging a massive surge in cases and deaths throughout the area and the greater Lombardy region.

The pope said he and the students originally were scheduled to have their audience at the Vatican closer to the one-year anniversary of that first outbreak and the start of the pandemic in Europe.

The meeting was important, he said, because their school represented “a sign of hope” in such a difficult situation, and he congratulated them for “never losing heart” during this trial.

Many students and teachers have sent the pope letters about their pandemic experiences, describing a variety of positive experiences they have had, he said, which shows that when the “generative” power of teachers and the “dreams” of students come together, “there is no virus that can stop them.”

He urged the students to cultivate the strength and desire they possess. He said when that is stimulated, nurtured and “accompanied with wisdom and passion by adults, it brings amazing fruits.”

The pope recognized the difficulties students and teachers faced with online learning, which hurt the relational aspect of their schooling, and he said he hoped they could restart fully again soon.

“But I invite you to learn something from this absence, that, in a certain way, this bad experience may teach something, that is, the importance of interpersonal — not virtual — relationships,” he said.

Pope Francis told the students he hoped the imminent end of the school year would go well, not just grade-wise, but also and most of all, people-wise. He asked they see school as a place to mature and grow in their hands, head and heart, learning to be open, respectful and constructive in their relationships and to become aware and responsible citizens.