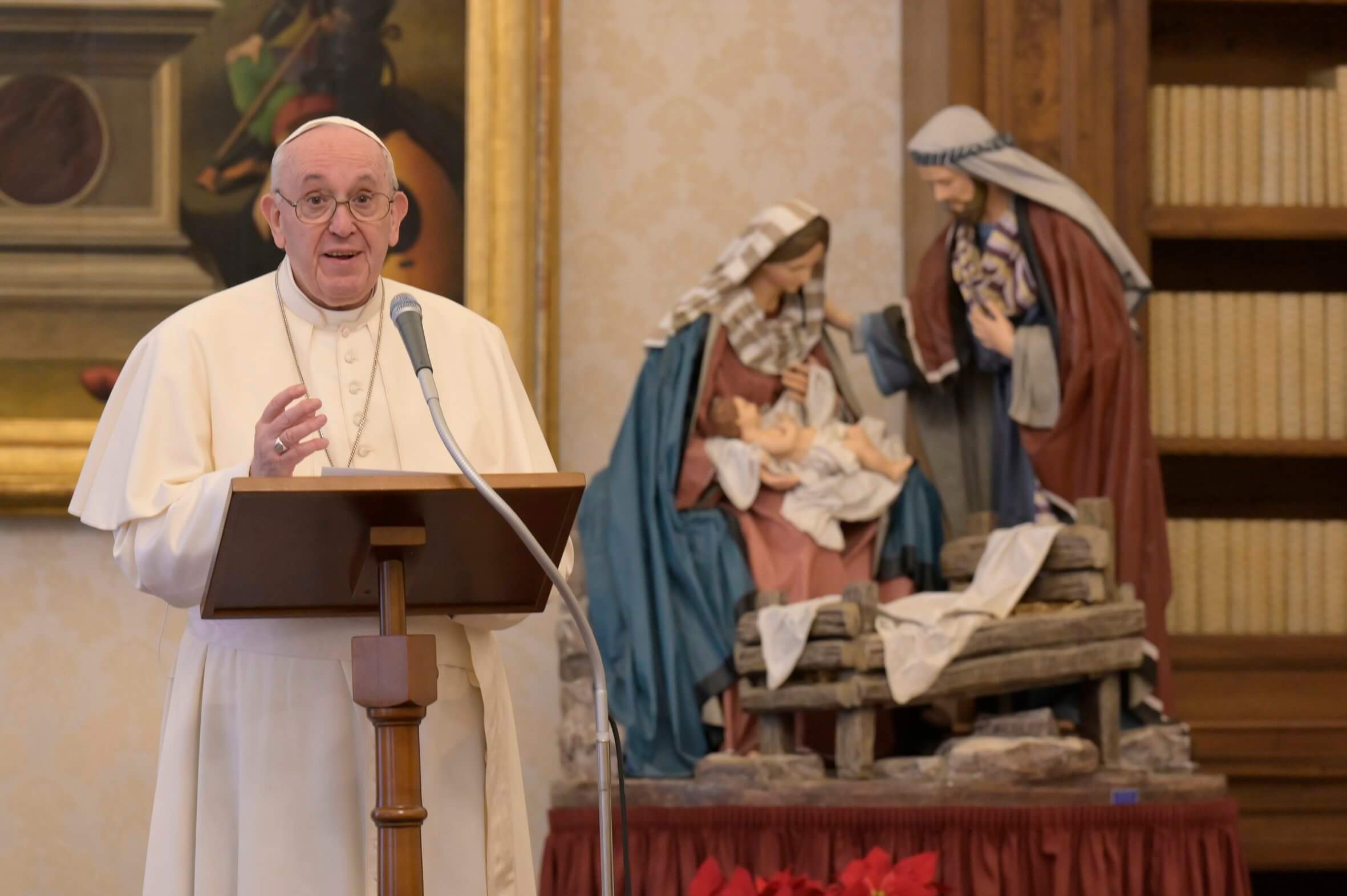 Photo Credit: CNS/Vatican Media - Pope Francis leads the recitation of the Angelus from the library of the Apostolic Palace at the Vatican Jan. 1.

In a new Apostolic Letter entitled “Patris corde” (“With a Father’s Heart”), Pope Francis describes St. Joseph as a beloved father, a tender and loving father, an obedient father, an accepting father; a father who is creatively courageous, a working father, a father in the shadows. The letter marks the 150th anniversary of Blessed Pope Pius IX’s declaration of St. Joseph as patron of the Universal Church.

To celebrate the anniversary, Pope Francis has proclaimed a special “Year of St. Joseph,” beginning on the Solemnity of the Immaculate Conception 2020 and extending to the same feast in 2021.

The Holy Father wrote “Patris corde” against the backdrop of the Covid-19 pandemic, which, he says, has helped us see more clearly the importance of “ordinary” people who, though far from the limelight, exercise patience and offer hope every day. In this, they resemble St. Joseph, “the man who goes unnoticed, a daily, discreet and hidden presence.” St. Joseph, in fact, “concretely expressed his fatherhood” by making an offering of himself in love “a love placed at the service of the Messiah who was growing to maturity in his home,” writes Pope Francis, quoting St. Paul VI.

And because of his role at “the crossroads between the Old and New Testament,” St. Joseph “has always been venerated as a father by the Christian people.” In him, “Jesus saw the tender love of God,” the one that helps us accept our weakness, because “it is through” and despite “our fears, our frailties, and our weakness” that most divine designs are realized.

“Only tender love will save us from the snares of the accuser,” emphasizes the Pontiff, and it is by encountering God’s mercy especially in the Sacrament of Reconciliation that we “experience His truth and tenderness,” because “we know that God’s truth does not condemn us, but instead welcomes, embraces, sustains and forgives us.”

Joseph is also a father in obedience to God: with his “fiat” he protects Mary and Jesus and teaches his Son to “do the will of the Father.” Called by God to serve the mission of Jesus, he “cooperated… in the great mystery of Redemption,” as St. John Paul II said, “and is truly a minister of salvation.”

At the same time, Joseph is “an accepting Father,” because he “accepted Mary unconditionally” — an important gesture even today, says Pope Francis, “in our world where psychological, verbal and physical violence towards women is so evident.” But the bridegroom of Mary is also the one who, trusting in the Lord, accepts in his life even the events that he does not understand, “setting aside his own ideas” and reconciling himself with his own history.

“Patris corde” highlights “the creative courage” of St. Joseph, which “emerges especially in the way we deal with difficulties.” “The carpenter of Nazareth,” explains the pope, was able to turn a problem into a possibility by trusting in divine providence.” He had to deal with “the concrete problems” his family faced, problems faced by other families in the world, and especially those of migrants.