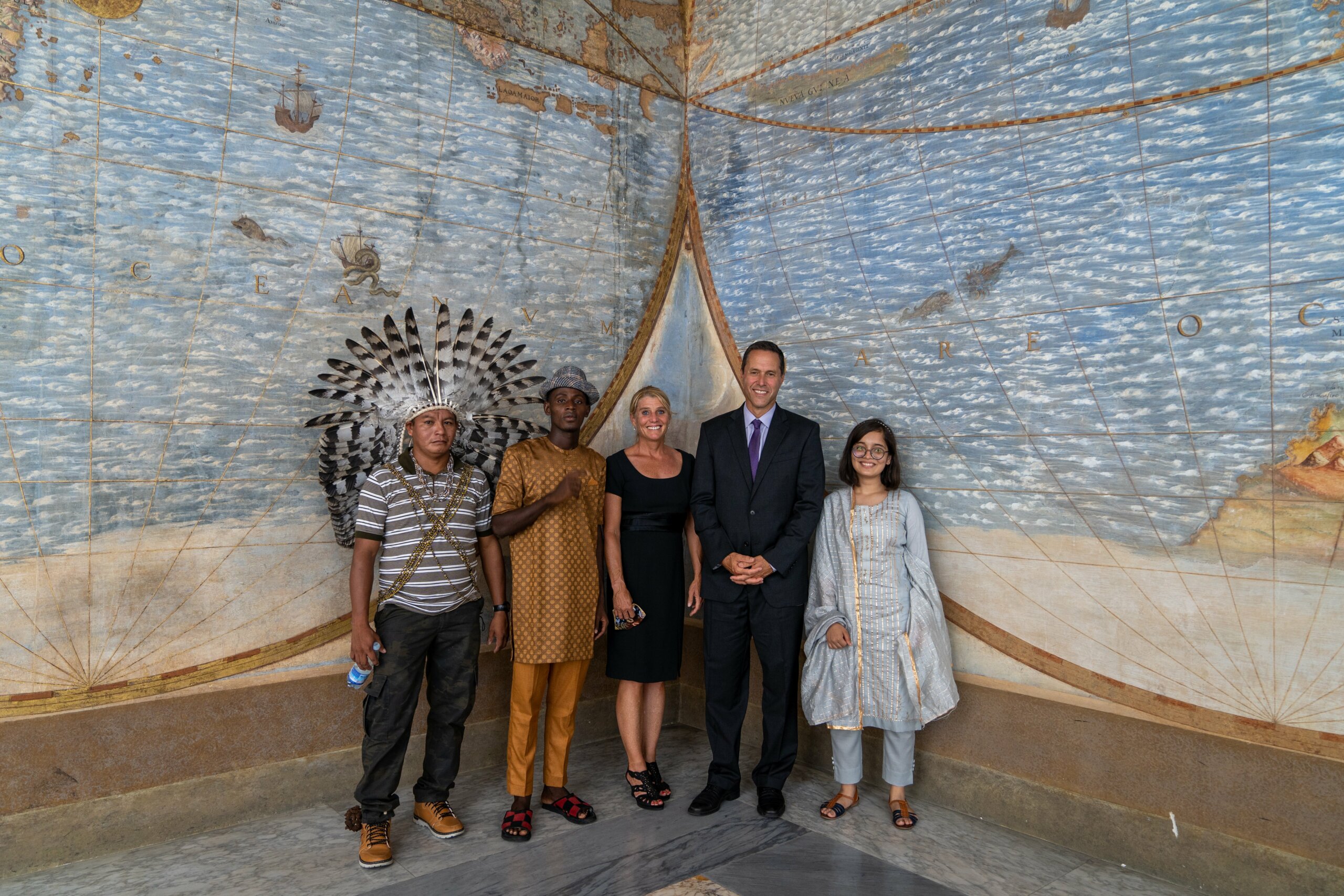 Photo Credit: CNS/courtesy Off the Fence - Chief Dadá Borarí from the Maró Indigenous Lands of the Brazilian Amazon; Arouna Kandé, a climate change refugee from Senegal; U.S. scientists Robin Martin and Greg Asner; and teenage climate activist Ridhima Pandey of India participated in the making of the documentary "The Letter." They are seen inside the Apostolic Palace at the Vatican Aug. 26, 2021. The film tells the story of a journey to Rome of frontline leaders to discuss with Pope Francis his encyclical "Laudato Si', on Care for Our Common Home."

Pope Francis is getting more non-Catholics to share in his work.

The latest is Nicolas Brown, who directed “The Letter: A Message for Our Earth,” a documentary on the pope’s 2015 encyclical “Laudato Si’, on Care for Our Common Home.”

The 90-minute film will air Wednesday, Dec. 21, 8 p.m.-9:30 p.m. EST on PBS (check local listings). But for those who can’t wait that long, the documentary is already on YouTube, which helped produce it.

“We decided to make this film and not put it behind a paywall. We purposely did not go to Netflix and put it behind the reach of anybody,” Brown told Catholic News Service during a Dec. 7 video interview. Brown was speaking from Oxford, England, where he is at work on other environment-related projects.

“YouTube is a sort of spiritual place. PBS took on that spirit as well. They don’t feel that they (the two services) overlap. They both feel they want to hear this message, which speaks to very different demographics inside society, which I think is very good sign for the environment.”

Brown grew up a Lutheran in Colorado. “Because of the small numbers of people at confirmation camp,” he said, there was a strong presence of “evangelical Christianity, which had a very literal interpretation” of the Bible. Brown shunned both the evangelicals and his own faith tradition as a result. “I carried this prejudice with me for 20 years,” he disclosed.

He said he was skeptical when approached about making a film about the pope’s encyclical, which addresses caring for creation and the interconnectivity of all life on the planet.

“I’m not Catholic, I’m not religious. I’m agnostic, let’s say,” Brown said. But when he read “Laudato Si'” in Rome, he admitted, “I was blown away. The proverbial plank was lifted from my eyes. I think I was quite prejudiced against people of faith, thinking that because they had their belief and faith, they wouldn’t support my personal truth and belief.”

Brown said, “As I spent more time with the cardinals and the brothers and the monks and nuns in Rome, I saw this incredible symbiotic relationship between science, faith and religion.” He added, “I understand that there’s always points of disagreement, but the points of agreement were so much more than what I anticipated.”

From his making of “The Letter,” “I learned the benefits of moral leadership,” he said. “Let’s face it. Scientists do not have much to say about the morality of why we should care about our planet.”

Brown explained that he wants “to bring ‘Laudato Si’ to life not only for my people, the sort of technocrats and privileged people of the world … but also to understand this road that the pope took and many religious people took.”

The filmmaker also spoke movingly of “the favelas and to see the suffering humanity … they were displaced by the land, which is the discovery the pope made when he made the environmental revelations he had before writing ‘Laudato Si’.”

“The Letter” chronicles some of the threats to the environment worldwide, including the devastating Australian fires of 2020 and the shrinking of the coral reefs in the Pacific Ocean. The show’s title refers not only to Pope Francis’ encyclical, but to an invitation sent by the pope to five people — whom Brown described as “the voices of the voiceless” in their advocacy for protecting the planet — to meet with the pontiff at the Vatican.

If you think obtaining footage of Amazon rainforest clear-cutting is tough, it’s simple compared to what Brown said was the hardest sequence to film: “Clearly, getting the interview with the pope was the most difficult. Even if you have the Vatican Dicastery for Human Development and the Dicastery for Communication on your side, he’s notoriously said, ‘I don’t do interviews.'”

Brown settled for a consolation prize: “What we got was not an interview, it was a conversation (with the five climate activists). He arrived 20 minutes early and left 20 minutes late. So we had 80 minutes with the pope, which I am told is a lot,” he told CNS.

“I still don’t know how it actually happened. … He really was very generous once we were able to secure that meeting.”