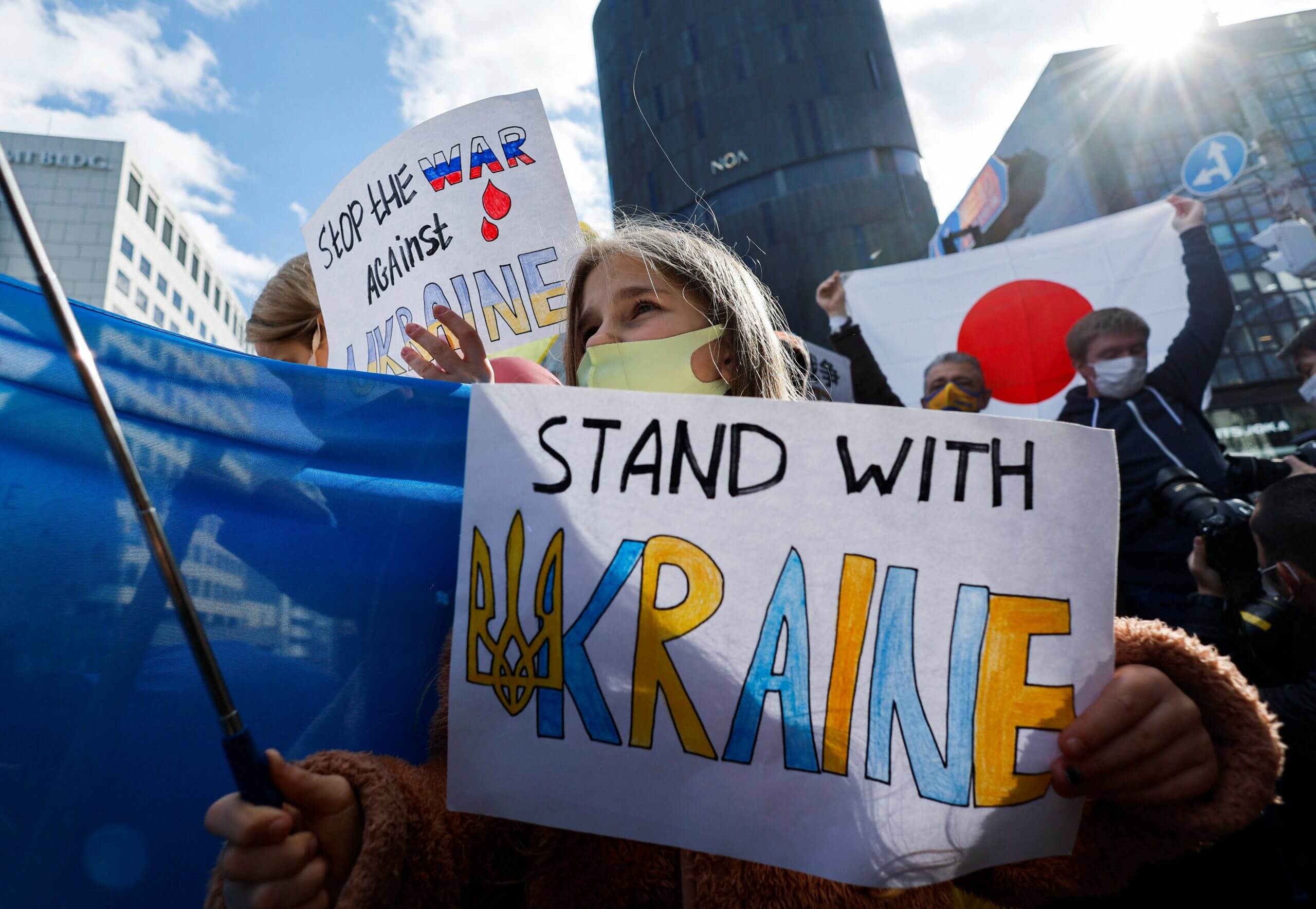 Photo Credit: CNS/Issei Kato, Reuters - A Ukrainian residing in Japan shows a placard during a protest rally denouncing Russia over its actions in Ukraine, near the Russian Embassy in Tokyo Feb. 23. Pope Francis expressed "great sorrow" over the situation in Ukraine and called on Christians to observe a day of prayer and fasting for peace on Ash Wednesday, March 2.

Pope calls for day of prayer, fasting for peace in Ukraine

As the threat of war loomed over the world, Pope Francis called on people to pray and fast for peace in Ukraine on Ash Wednesday.

Before concluding his general audience Feb. 23, the pope called on believers and nonbelievers to combat the “diabolical insistence, the diabolical senselessness of violence” with prayer and fasting.

“I invite everyone to make March 2, Ash Wednesday, a day of fasting for peace,” he said. “I encourage believers in a special way to devote themselves intensely to prayer and fasting on that day. May the Queen of Peace protect the world from the folly of war.”

In his appeal, the pope said he, like many around the world, felt “anguish and concern” after Russian President Vladimir Putin recognized the independence of the eastern Ukrainian regions of Donetsk and Luhansk.

The pope said that due to the “alarming” developments in the region, “once again, the peace of all is threatened by partisan interests.”

“I would like to appeal to those with political responsibilities to do a serious examination of conscience before God, who is the God of peace and not of war, who is the father of all and not only of some, who wants us to be brothers and sisters and not enemies,” he said.

He also urged world leaders to “refrain from any action that would cause even more suffering to the people, destabilizing the coexistence between nations and discrediting international law.”

Putin’s recognition of the two breakaway regions’ independence was seen by Western leaders as a violation of international law protecting Ukraine’s territorial integrity and as a move that could pave the way for a Russian invasion of eastern Ukraine.

In the wake of the Russian president’s actions, the United States, the United Kingdom and the European Union announced sanctions against several Russian banks and institutions.

In a statement released Feb. 22, Archbishop Sviatoslav Shevchuk of Kyiv-Halych, head of the Ukrainian Catholic Church, said Putin’s recognition of the Donetsk and Luhansk regions has caused “irreparable damage” to the “logic of international relations.”

He also said the Russian president “destroyed foundational principles for a long-term process of restoring peace in Ukraine” and “created the path for a new wave of military aggression against our state.”

“Today, all of humanity has been placed in danger,” he said, because Putin’s action asserts that “the powerful have a right to impose themselves on whomever they wish, with no regard for the rule of law.”

Archbishop Shevchuk reminded world leaders of their duty and responsibility “to actively work to avert war and protect a just peace.”

“I call upon all people of good will to not ignore the suffering of the Ukrainian people brought on by Russian military aggression,” he said. “We are a people who love peace. And precisely for that reason we are ready to defend it and fight for it.”