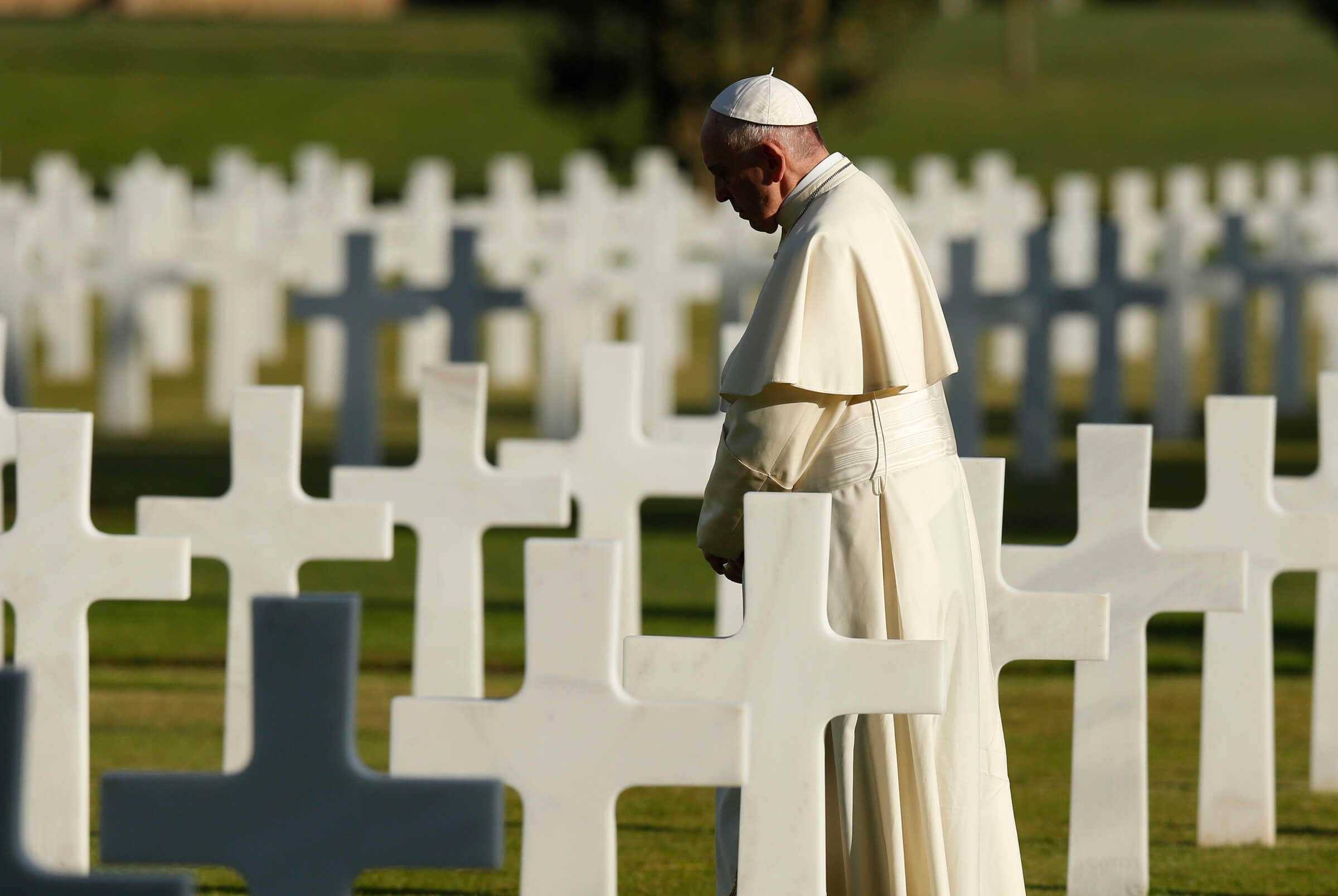 Photo Credit: CNS/Paul Haring - Pope Francis prays in the Sicily-Rome American Cemetery — the resting place of 7,860 American military members who died in World War II — in Nettuno, Italy, Nov. 2, 2017, the feast of All Souls. In a joint appeal marking 80 years since start of World War II, Polish and German bishops warn that Europeans still need to work toward peace and unity.

Catholic bishops from Poland and Germany have warned that peace and unity are still needed in Europe, 80 years after the start of World War II.

“Eighty years after the war’s outbreak, today’s generations in Poland, Germany and Europe are experiencing many changes for the better. But the fruits of reconciliation must be handled responsibly and not superficially imperiled for political interests,” they said.

The statement was published as state and government leaders gathered Sept. 1 to commemorate the Nazi attack on Poland, which was followed by a Soviet invasion from the east Sept. 17 under a secret pact between dictators Adolf Hitler and Josef Stalin.

The bishops said the pain of the war, which left 6 million Poles dead, was still felt today, together with damage and suffering inflicted by the subsequent mass deportation of Poles and Germans.

Archbishop Gadecki told a Sept. 1 Mass in Poznan, Poland, that wartime Germany’s plans to reduce the Polish population by 80 percent had accustomed people to “hitherto unknown levels of contempt for humanity and the violation of rights.”

“In September 1939, two invaders from West and East, Germany and Russia, not only deprived the Poles of freedom, but also demolished the established order, giving primacy to violence over law and moral dissolution over Christian principles,” Archbishop Gadecki said. “Poland was erased from the map and divided between the anti-Christian and atheist ideologies of national and international socialism. Both totalitarian systems, rejecting God, turned against humanity in a shocking manner.”

More than 56 million people died during the 1939-1945 war. The six-year Nazi-led occupation, during which 10 million people were sent to concentration camps, cost Poland a third of its national wealth and a fifth of its population, including 90 percent of its 3 million-strong Jewish minority, for which some Polish politicians are still demanding reparations.

At least 1.8 million Poles were also sent to labor camps by Soviet occupation forces, who secretly executed 25,000 interned Polish army and police officers in a plan to eliminate resistance.

In their joint statement for the anniversary, marked by commemorative Masses and the ringing of church bells, the bishops said “strengthening and deepening Europe’s unity depends on us today.”

“We appeal to everyone to draw on the collective memory of a past burdened by violence and injustice, but also on courage-giving testimonies of humanity, for strength and inspiration in further joint efforts at peace and unity.”