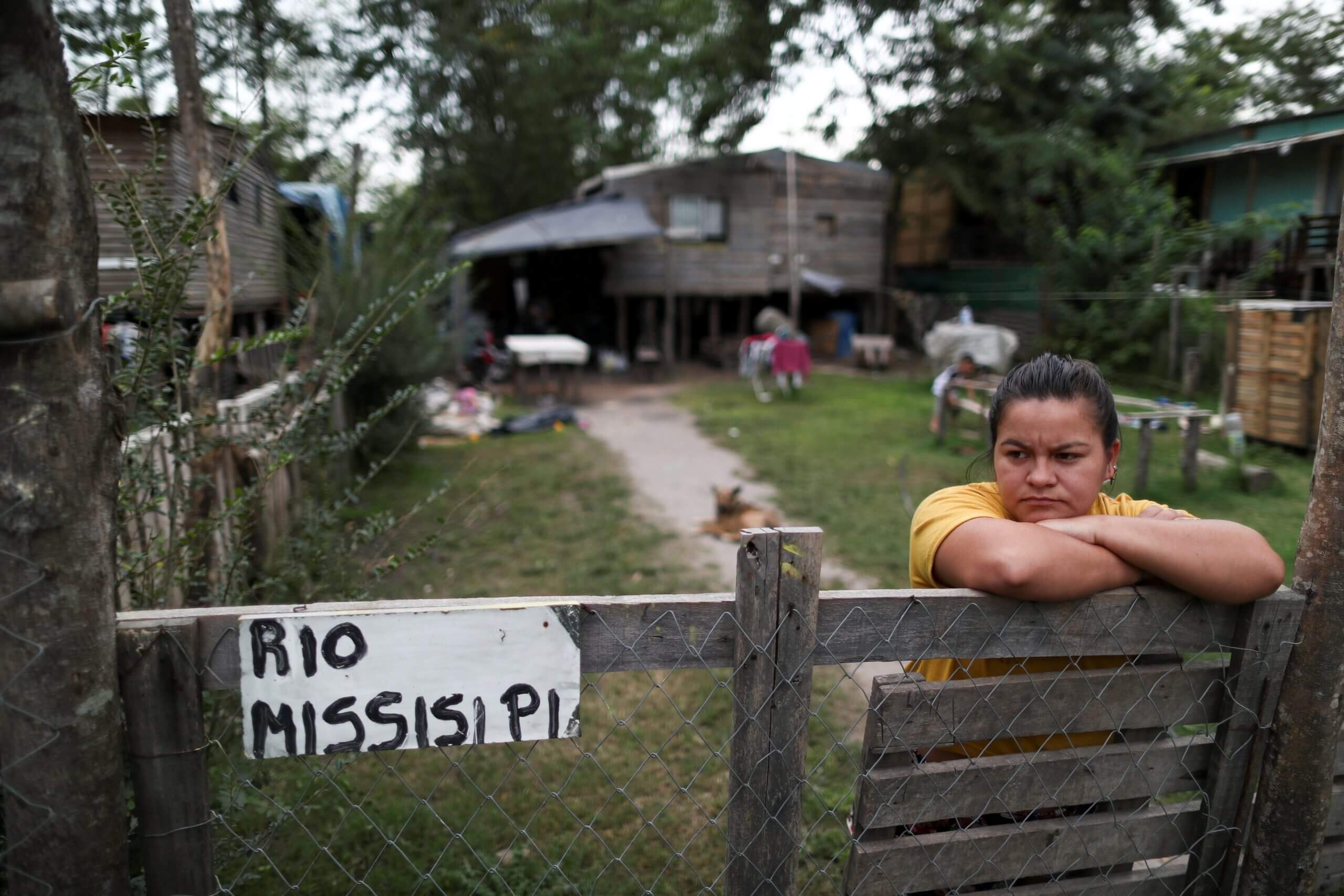 Photo Credit: CNS/Agustin Marcarian, Reuters - Jaqueline Romero, 23, stands outside her home in a poor section of Buenos Aires, Argentina, during the Covud-19 pandemic. Poverty and the aftermath of the pandemic are expected to be prominent at the Sixth Ecclesial Assembly of Latin America and the Caribbean in Mexico Nov. 21-28.

During the pandemic, parishes in the Diocese of Valle de Chalco on the outskirts of Mexico City have made care packages, taken meals to families of Covid-19 patients and operated food banks.

But they are seeing more and more problems from the pandemic.

“You see poverty, you see it increasing, and what I especially see in the streets like never before is so much informal commerce,” said Father Raúl Martínez Arreortúa. Such activity in the nontaxpaying economy — people selling homemade food and drink from their vehicles, peddling items at intersections or doing odd jobs — “is a sign of rising unemployment,” he said.

The Covid-19 pandemic punished Latin America especially hard. Home to 8 percent of the global population, the region accounts for one-third of all pandemic deaths. Poverty deepened and inequality widened, worsening problems long plaguing Latin America. Schools stayed closed for longer in Latin America than any other part of the world, with the poorest unable to learn remotely over spotty internet connections. High dropout rates threatened to truncate social mobility for millions.

Latin American economies contracted by 7 percent in 2020, the worst of any region, according to the International Monetary Fund. Forecasts for 2021 are mostly pessimistic — unlike other parts of the world — though recoveries are robust in some countries such as Chile, which projects 11 percent economic growth. Vaccination campaigns also started slowly, but have taken hold, with rates in some countries equaling or surpassing the United States.

“The pandemic has certainly brought more poverty. There are people who have lost not only their loved ones, but have lost work (and) closed business,” said Peruvian Archbishop Héctor Miguel Cabrejos Vidarte, president of the Latin American bishops’ council, or CELAM.

“One has to confront this situation. Certainly it’s a call for governments and the church” to take action, he told Catholic News Service.

CELAM has made addressing poverty and the aftermath of the pandemic a priority. Both issues are expected to be prominent at the Sixth Ecclesial Assembly of Latin America and the Caribbean in Mexico Nov. 21-28.

One of the assembly’s preparatory documents describes the pandemic as a “sign of an epochal change,” which prompts people to consider “a major transformation of our culture toward a way of life that is ecologically, socially, economically, politically and culturally sustainable.”

The document also notes, “In our region, the pandemic has revealed with great force the serious problems we have been suffering for decades: the great income inequality in our societies, the unhealthy conditions for a worthy life in dignity, the limited access to quality health and education services, no access to clean water, sewage and electricity, as well as the problem of discrimination and exclusion of millions of people.”

Analysts say Latin America was already suffering economically prior to the pandemic; poverty was worsening and economies were stagnating.

“The sharp rise in poverty in Latin America reflects the region’s deep pre-pandemic economic troubles. Most of the region’s big economies remain dependent on commodity exports, and they never recovered from the fall in commodity prices in 2014,” said Benjamin Gedan, deputy director of the Latin American Program at the Washington-based Woodrow Wilson International Center for Scholars.

Most notoriously in the region, the Venezuelan economy collapsed over the past decade, sending some 5.6 million migrants fleeing to other countries in the region and, more recently, the United States.

Migration toward the United States slowed after the pandemic hit, but returned in large numbers. The pandemic only made matters worse, church leaders say.

“What people are looking at (through migration) is a means of material salvation,” said Cardinal Álvaro Ramazzini of Huehuetenango, Guatemala.

“Lots of informal businesses went broke. People were left without money, and they almost certainly have loans they can’t repay,” he added. “So going to the United States … is a path to being able to resolve these issues.”

The pandemic also exposed inequalities, including inadequate health systems that were underfunded and underequipped prior to the pandemic and lacking the capacity to care for people who needed intensive care.

Indigenous communities in parts of Mexico sealed off their communities to avoid contagion and often distrusted the authorities, the consequence of centuries of being lied to by governments, according to priests in Mexico’s southern Chiapas state.

In Mexico and also in the Amazon region, Indigenous communities turned to traditional medicine, according to priests in Mexico and Colombia.

“The pandemic showed the weakness and fragility of the health system, which was very precarious,” said Jesuit Father Alfredo Ferro, executive secretary of the Ecclesial Conference of the Amazon.

Mexico took a contrarian approach to the pandemic: austerity, spending less than 1% of the gross domestic product in its pandemic response. Mexican President Andrés Manuel López Obrador spoke of families taking care of each other, but Mexico’s bishops warned of increasing hardships and rising domestic violence.

In Argentina, especially long quarantines — more than 200 days in greater Buenos Aires — proved unpopular as the pandemic dragged on and poverty rose to more than 40 percent of the population.

Early in the pandemic, Argentine President Alberto Fernández met with a group of priests known as the ‘curas villeros’; they ministered in the slums, provided meals from their soup kitchens and turned parishes into places for sick patients to quarantine.

The priests, however, expressed dismay at the limited role of the government in their communities, which have existed for decades on the margins of society without proper access to services such as health.

“We cannot, nor do we want to, replace the state. But we can and do want to collaborate,” the priests said in a June 2020 statement.

“The church role was very important because Caritas … didn’t stop helping or accompanying the poor,” said Nicolás Meyer, director of Caritas Argentina. “It was two years of our volunteers never ceasing to head out and risk their lives, because there were volunteers who also died of COVID.”

As archbishop of Buenos Aires and as head of the drafting committee for CELAM’s 2007 assembly document, Pope Francis spoke of a church going out to the peripheries to evangelize. CELAM is expected to renew its commitment to such practices.

“The church is very much engaged in a lot of the social issues,” said Rick Jones, a former migration adviser to Catholic Relief Services.

He pointed to the widespread consultation ahead of the CELAM assembly and the participation of priests, religious and laity in the assembly as something “that is going to mobilize the church like we haven’t seen in a long time. But it’s a process that’s being unleashed.”