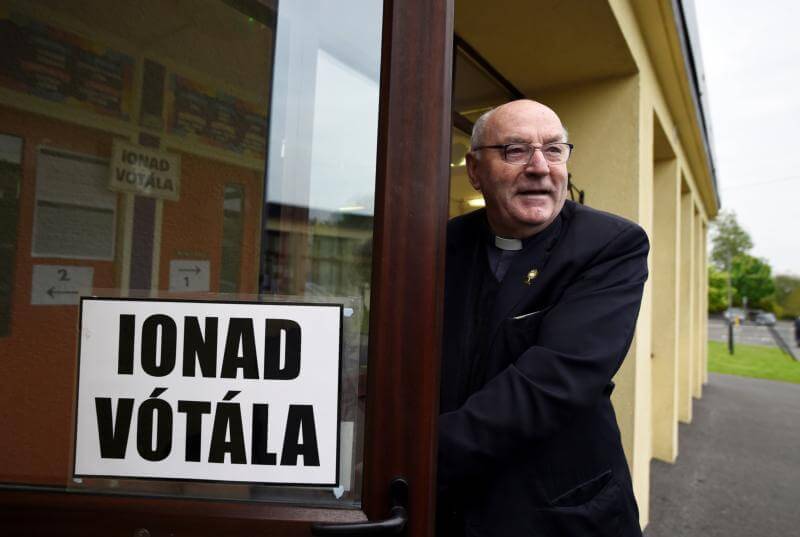 Photo Credit: CNS photo/Clodagh Kilcoyne, Reuters - Father Thomas Harrington arrives to vote May 25 at Knock National School as Ireland holds a referendum on its abortion law. Voters went to the polls in a referendum on whether to remove the Eighth Amendment, which was passed in 1983 and gives unborn children an equal right to life "with due regard" to the life of the mother.

An Irish bishop said he hopes Pope Francis’ August visit can help bring healing after a divisive referendum that will pave the way for abortion on demand up to 12 weeks’ gestation.

In a May 25 referendum, voters opted by a margin of 66.4 percent to 33.6 percent to remove the right to life of the unborn from the constitution.

Bishop Brendan Leahy of Limerick told Massgoers May 26 that the result “is deeply regrettable and chilling for those of us who voted ‘no.'”

He said “the final result of the referendum is the will of the majority of the people, though not all the people.”

“It is a vote, of course, that does not change our position. Our message is one of love: love for all, love for life, for those with us today, for those in the womb,” he said.

Referring to Pope Francis’ Aug. 25-26 visit, Bishop Leahy said: “In August, we will unite as a family, to renew that sense of family when the World Meeting of Families comes here. We have the privilege of Pope Francis coming, and today I cannot think of his visit being more timely: to come here and remind us of the importance of family, of the love we have of family, of the reality that, yes, families get bruised sometimes, but they should never be broken.

“So we go forward to that moment, we look forward to the healing it will bring and how we will be renewed again in love and care for one another,” he said.

Archbishop Diarmuid Martin of Dublin insisted that “the Irish Church after the referendum must renew its commitment to support life.”

Speaking during a homily at Mass for the ordination to the diaconate of four seminarians at the national seminary in Maynooth, County Kildare, Archbishop Martin insisted that the church is called to be pro-life “not just in words and statements and manifestoes, but to be pro-life in deeds, by being a church which reflects the loving care of Jesus for human life at any stage.

“That loving care includes support to help those women who face enormous challenges and who grapple with very difficult decisions to choose life,” he said.

Archbishop Martin said during the homily that “the challenge of witnessing to Jesus Christ in today’s world is not an easy one. Many will see the results of Friday’s referendum as an indication that the Catholic Church in Ireland is regarded today by many with indifference and as having a marginal role in the formation of Irish culture.

“The Church that is called to make present the Jesus who is full of mercy and compassion is seen by many as somehow weak in compassion,” he said.