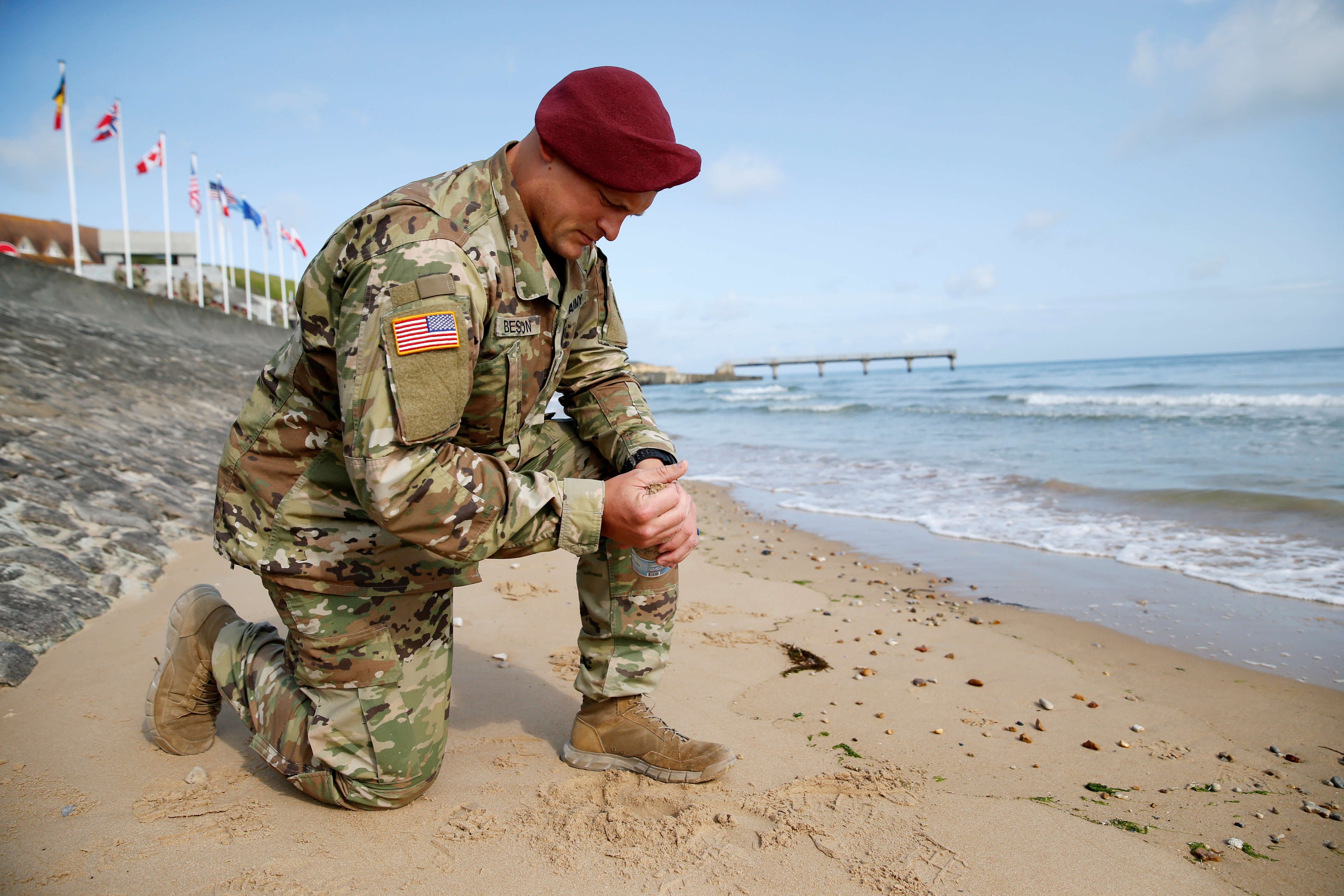 Photo Credit: CNS/Pascal Rossignol, Reuters - A U.S. Army soldier collects sand at Omaha Beach on the Normandy coast in France ahead of the 75th anniversary of D-Day June 6. Archbishop Timothy P. Broglio of the U.S. Archdiocese for the Military Services is urging Catholics to pause in prayer and to remember and "give thanks for those who 75 years ago made the ultimate sacrifice" in the Allied invasion of Normandy during World War II.

In remembering the estimated 4,400 Allied troops who died storming the beaches of Normandy, France, 75 years ago on D-Day, Archbishop Timothy Broglio of the U.S. Archdiocese for the Military Services said that “Jesus Christ reminds us there is no greater love than to lay down one’s life for one’s friends.”

“At this time, in particular, we express deep gratitude for those who laid down their lives on D-Day,” he said in a statement June 4.

Archbishop Broglio planned to travel again to France for the 75th anniversary of the Normandy invasion to commemorate and give thanks for the lives lost on the beaches of Normandy, in Europe and in the Pacific. The German casualties on D-Day were between 4,000 and 9,000.

“We ask God that their sacrifice not be in vain,” Archbishop Broglio said. “We beg him to transform our power to turn war into a force for peace, to transform our weapons into plowshares, to give us the ability to negotiate, to talk and to listen.”

In 2015, he journeyed to Normandy to commemorate the sad day and to help dedicate a monument on Utah Beach depicting three American GIs emerging from a Higgins boat. The Higgins boat was designed by Andrew Jackson Higgins to facilitate easy landing on beaches and in marshes, and was used extensively in the D-Day operations.

The archbishop remembered the boat’s designers, those who “labored with vision to accomplish a goal, the liberation of peoples, their brothers and sisters in human society.”

While in Normandy, Broglio also attended a commemoration for fallen Danish troops and celebrated Mass on the feast of Corpus Christi, during which he prayed for world peace.

At that time, he said he “was struck by the number of French men and women who came up to me and said: ‘We will never forget what your countrymen did here.'”

Archbishop Broglio reminded the nation, too, to remember the sacrifices of American servicemen, as well as those of every soldier and civilian who lost life or loved ones.

For this year’s commemoration, Archbishop Broglio prayed that Catholics and all Americans will “remain vigilant against the forces of evil in our troubled world, and to pour our energies into building lasting peace and justice among nations.”