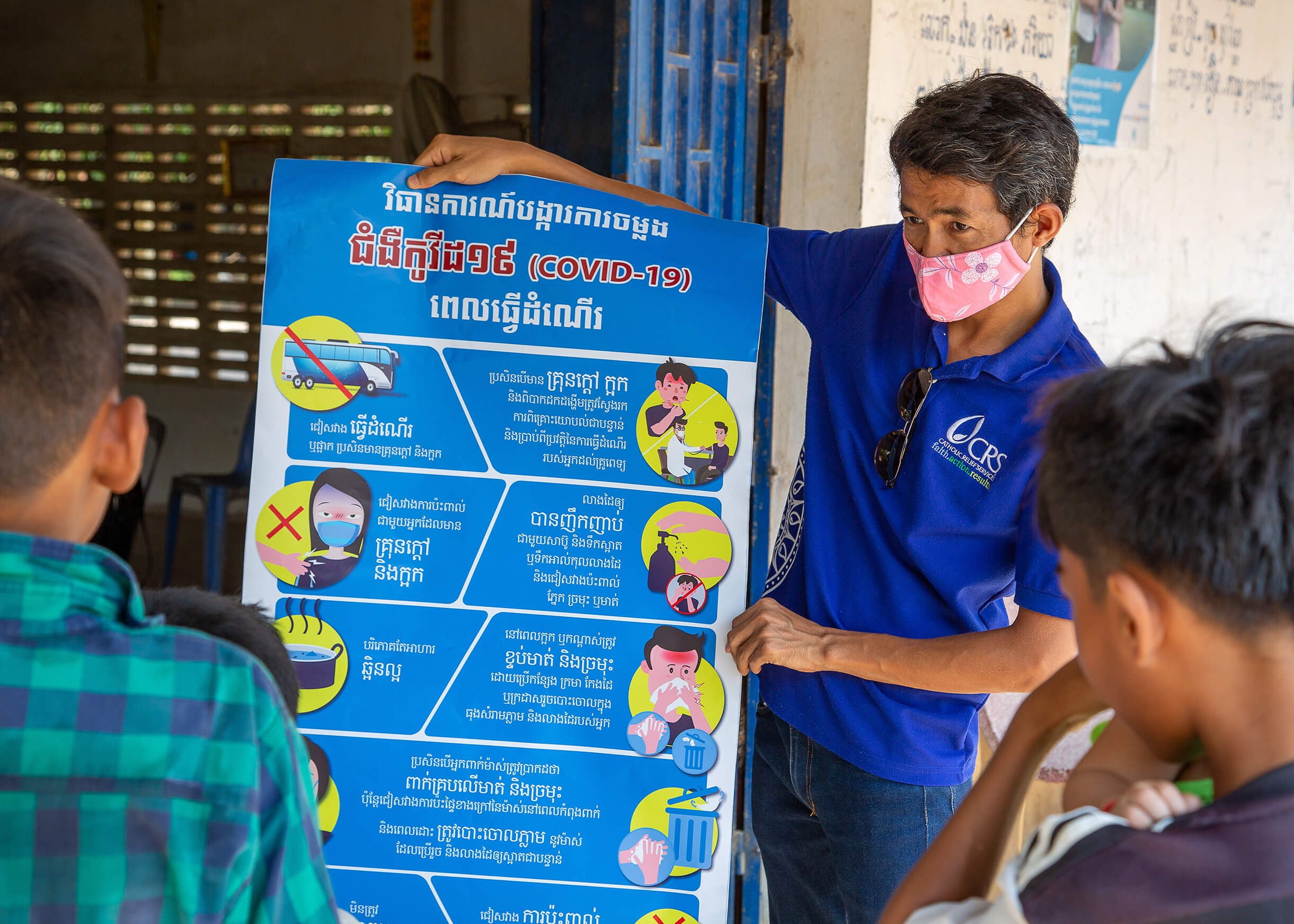 As the coronavirus pandemic commands global attention, for those working at organizations such as Catholic Relief Services, the health crisis is one in a long list of emergencies staff must tend to in its mission to help the world’s poorest.

“Our partners in Lebanon said COVID is not their top problem, that their top problem is an economic crisis where they had an 80 percent devaluation of currency and are being really hit economically,” said Sean Callahan, president and CEO of the U.S. bishops’ overseas relief and development agency in a July 17 interview with Catholic News Service about a dire hunger problem the world will soon face.

Hunger is what Lebanon is facing with the collapse of its currency, as people are able to buy far less with their money and food imports become scarce. Some worry the country may soon face famine, a situation the country hasn’t seen since the late 1910s when, like the rest of the world, it, too, was dealing with a pandemic.

And hunger, particularly during a pandemic, is of utmost concern — not just in Lebanon.

A July 13 report from the United Nations said almost 690 million people went hungry in 2019, an increase of 10 million from the previous year — figures arrived at before the pandemic began. Countries and geographic areas with a high number of vulnerable populations that may soon experience large-scale hunger, in addition to other conditions, are causing alarm among aid agencies such as CRS as the virus spreads.

But even as CRS’ army of 7,200 staff and partners who work on the organization’s behalf worldwide are trying to fend off the virus themselves, some still head to the front lines to help.

In the more than 110 countries where CRS serves, staff and partners have continued the organization’s day-to-day work, Callahan said. Some have modified operations and are working remotely, while in other places they have continued to feed people and provide essential services but while observing standard precautions of wearing masks, washing hands and maintaining a safe distance from others.

The work has proved more challenging than ever.

In some places, in addition to the pandemic, some are dealing with a variety of obstacles, delivering help amid natural destruction because of tropical storms in Central America, drought and locust infestations in Africa and the current typhoon season in Asia — in addition to localized violence in some countries. Some affiliated with CRS have even died in the conflicts, but the work, nevertheless, continues.

“We’re continuing to do our livelihoods programs, making sure people get fed, get what they need so that they can plant (crops),” provide access to medicine or treatment for malaria, HIV/AIDS, administer immunizations, all “so that we don’t have as bad a hunger crisis as is foreseen right now,” Callahan said.

It’s a race against the clock on many levels. Country lockdowns that have come about because of the pandemic have led to a series of interruptions in a variety of supplies in many countries, particularly developing nations.

“So, food that would normally come from one country to another is now blocked off,” said Callahan.

Some face threats even to the few local crops they had planted because of storm damage, as was the case in Central America where Tropical Storm Amanda blew in in late May. Now the threat of lack of supplies and an impending plague of locusts threaten newly planted crops.

“Small farmers and others who would normally go out and tend their fields are being asked to not travel, to stay at home,” Callahan said. “The fertilizer and some of the pesticide that are required in certain areas can’t get shipped in because of the closures of many of these countries and so there are all of these blockages that are reducing the ability for them to produce locally or to access food from other countries and so that is creating a problem.”

Unlike the U.S., which offers economic relief packages to its citizenry, there is no economic safety net whatsoever in some places, Callahan said.

“They don’t have that because they’re daily wage earners or if they’re a farmer who has loans out until their ‘cosechas,’ until the harvest comes in, they’re waiting for that, but they need food and they need assistance,” he said.

“If we don’t help now, then we will have a much higher number of people in hunger. We’ll have a higher number of young children that will be stunted, and, at that point, they can never recover,” he continued. “They will never have their full human potential and so that will be a tragedy that will be on us for their lifetime and so it’s really something that is urgent right now.”

In places such as Central America, where schools have been closed since March, CRS has continued programs such as the school meals but in the form of monthly rations given to families so that children can continue to eat and won’t go without food for extended periods of time.

In July, CRS joined other faith-based organizations asking Congress for $10 billion to $15 billion in aid for the more than 70 percent of countries the Centers for Disease Control and Prevention have described as ill-equipped to handle the coronavirus.

With its “Lead the Way” campaign, it is asking U.S. Catholics to look at its advocacy website crs.org/get-involved/lead-way and become involved in what they can do for the vulnerable, calling or sending letters to their senators and members of Congress to push the funding through.

The campaign in English and Spanish is hoping to reach American Catholics of Hispanic descent to help in the effort, Callahan said.

“We’re just asking for a small percentage of money (from the U.S. budget) to go overseas,” he said. “We understand the U.S. needs to rebound back as well and we’ve got a lot of problems here … but we also know that that we have a global responsibility and we need to reach out to our brothers and sisters overseas. American Catholics can be particularly helpful.”

The money also would help with an urgent concern that directly affects CRS partners who live where the health systems are on the brink of collapsing.

“Medical facilities are in a challenging situation and so many of these people are working courageously to reach out to others who are in need, but at the same time, we’re very, very concerned about the risk for them and particularly of our staff that are from those countries,” he said.

“Our international staff can often be evacuated and go home, but those staff that are on the front lines and those local church partners, Caritas groups and others,” Callahan said, “are really on those front lines and because they are on the frontlines providing service, they’re much more in danger of catching COVID, being sick and so we’re very concerned about the ability to treat them in a system.”

With the challenges that COVID has introduced, there simply is no way to sugar coat an impending tragedy building up, he said.

“The situation is looking very dire,” he said. “The World Food Program out of the U.N. … they are predicting that it’s going to be catastrophic.”

Acute hunger could double this year from what it was in 2019, so the time to mitigate it is now, he said.

“It’s a heavy responsibility and I feel a lot of weight on my shoulders,” Callahan said.

But on the other hand, he added, “I am just truly inspired by the colleagues and the people that we work with around the world, to see the Gospel in action, to see church partners on the ground reaching out to people, to see the selflessness and the courageousness of our staff, helping people at a time when many of us are afraid that we will catch it ourselves. It is just quite frankly, truly, truly inspirational.”

Share This Post
Catholic Relief Services (CRS), Evangelization and Catechesis, CRS
See More
Last Article
The gift of wisdom is fit for a king and the rest of us
Next Article
A message from Jeanne Gearon, superintendent of Catholic schools
Back to Vermont Catholic Magazine