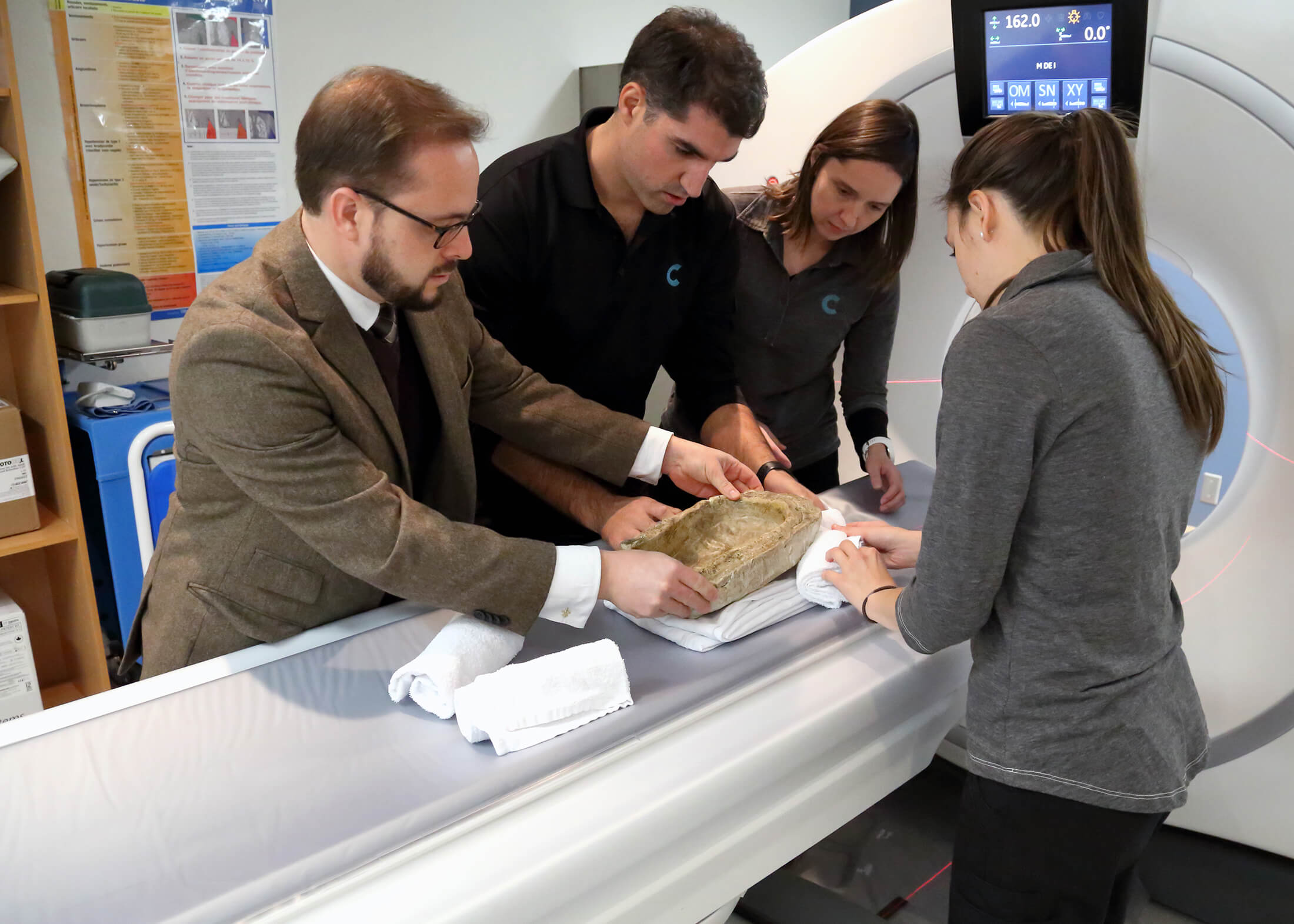 Philippe Roy-Lysencourt entered the clinic lab carrying a retro-looking cardboard box under his arm as if it were a football.

It was hard to imagine that the box contained what could be the death mask of famed 17th-century Canadian religious leader, St. Mary of the Incarnation.

Roy-Lysencourt, professor of theology and religious studies at Laval University, is trying to determine if the mask is indeed a mold of the face of the founder of the Ursuline congregation in New France.

He showed up at the radiology and medical imaging clinic in Quebec City Oct. 9 to have a CT scan of the mask as part of his investigation.

Dr. Pierre-Thomas Gagne, the clinic’s medical director, helped Roy-Lysencourt wedge the artifact in the machine to prevent it from moving during the scan.

The mask was found a few decades ago in the attic of the monastery of the Ursulines in Old Quebec, Roy-Lysencourt said. The order’s oral tradition relates it to its founder.

The mold appears to be made of sand, lime and water, a good sign it could be authentic, because plaster, which was historically used for such molds, is thought to have arrived in New France around 1678, six years after the saint’s death.

Under dimmed lights there was an atmosphere of deference as the images appeared on computer screens. The profile of the face appeared: a strong jaw, an aquiline nose and slightly sagging features associated with signs of aging. Roy-Lysencourt will want to compare them with the only two contemporary portraits that exist of the saint, one of which was created after her death.

“She’s been waiting for her scan for more than 300 years,” said Roy-Lysencourt, looking at images that already make it possible to guess what the three-dimensional reconstructed face will look like. The images were crisp. “The patient collaborated well,” Gagne joked.

Roy-Lysencourt was directed to a second pitch-dark room where the visual data was analyzed. A complete face appeared in 3D on a computer screen as the clinic’s staff looked in awe.

But this was only the first step in reconstructing the face from the mold. Roy-Lysencourt will work with Philippe Charlier, a forensic scientist who has completed past historical reconstructions. The researchers will collaborate with a forensic company owned by artist Philippe Froesch, who has developed an expertise in the field. The work involves using data from the scan while relying on artistic interpretation and archival evidence to determine the color of the eyes, hair and skin.

Although the CT scan was a success, Roy-Lysencourt remained cautious because it is not yet certain that this is a mold of the saint’s face. “I estimate that it’s about 50 percent likely to be hers,” he said.

The religious order’s archives on its founder do not mention the existence of such a mask. However, many of the first archives of the Quebec Ursulines were lost in a fire and were rewritten from memory years later. It’s a detail that may have been forgotten.

Ideally, Roy-Lysencourt wanted to cross-check the date from the scan with the actual skull of the saint, but it’s nowhere to be found.

“There is a tendency to believe that the skull is very durable. However, this is not necessarily the case. The most plausible hypothesis is that the skull has simply decomposed,” he said.

Why not just check the DNA from her other bones?

Because the saint was canonized by Pope Francis in 2014, the approval of the Vatican’s Congregation for Saints’ Causes is required to take a sample. The congregation didn’t grant this permission, saying it was best not to alter the remains.

It’s also difficult to recover a trace of DNA on the mask itself. It has already been used to make a plaster mold and has obviously been “cleaned thoroughly,” said the professor.

Roy-Lysencourt therefore intends to explore another avenue: that of the saint’s son. Indeed, before becoming a woman religious, Marie Guyart was married and had a child, Claude, born in 1619. The latter became Dom Claude Martin within the Congregation of Saint Maur, a Benedictine order. The Benedictine congregation of Solesmes is now the spiritual heirs.

However, if Marie Guyart’s skull cannot be found, it may be possible to trace the remains of her son via the Benedictine monks. The trail is at least worth exploring, Roy-Lysencourt said, because it would be a way to access DNA and bypass the Vatican’s prohibition. Still, the question remains: Why go through all this trouble?

“Among Mary of the Incarnation’s specialists, there is a fairly widespread hypothesis that she’s an illegitimate granddaughter of King Henry IV of France. This is a rather serious hypothesis,” Roy-Lysencourt explained. Because Henry IV’s DNA is available, crossing it with Dom Martin’s would make it possible to confirm or refute this hypothesis.

In the clinic’s parking lot, the professor put the box back in his car. He still needs a few months to continue his research. He hopes to find some definitive answers by January.