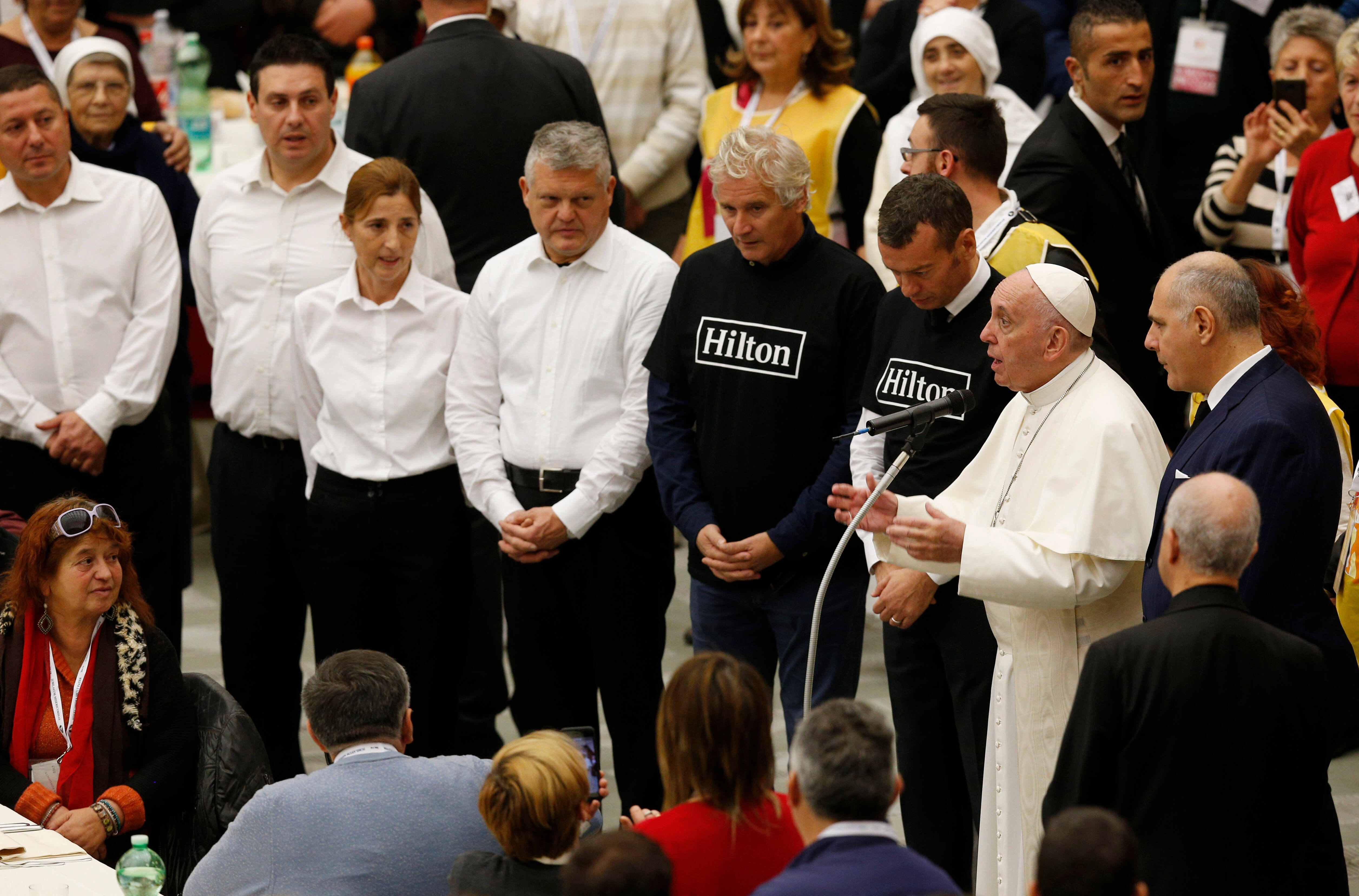 Photo Credit: CNS/Paul Haring - Pope Francis prays before eating lunch with poor people as he marks World Day of the Poor at the Vatican Nov. 18. Some 1,500 people joined him for lunch in Paul VI hall.

Helping the poor is not a papal fad, but a duty, pope says

As the rich get richer, the increasing misery and cries of the poor are ignored every day, Pope Francis said.

“We Christians cannot stand with arms folded in indifference” or thrown up in the air in helpless resignation, the pope said in his homily Nov. 18, the World Day of the Poor.

“As believers, we must stretch out our hands as Jesus does with us,” freely and lovingly offering help to the poor and all those in need, the pope said at the Mass in St. Peter’s Basilica. About 6,000 poor people attended the Mass as special guests; they were joined by volunteers and others who assist disadvantaged communities.

After the Mass and Angelus, the pope joined some 1,500 poor people in the Vatican’s audience hall for a multi-course lunch. Many parishes, schools and volunteer groups across Rome also offered a number of services and meals for the poor that day.

God always hears the cries of those in need, the pope said in his homily at the Mass, but what about “us? Do we have eyes to see, ears to hear, hands outstretched to offer help?”

Pope Francis urged everyone to pray for the grace to hear the cries of all the poor: “the stifled cry of the unborn, of starving children, of young people more used to the explosion of bombs than happy shouts of the playground.”

May people hear the cry of the abandoned elderly, those who lack any support, refugees and “entire peoples deprived even of the great natural resources at their disposal,” he said.

Referring to the Gospel story of the poor man begging for scraps, Pope Francis many people today are just like Lazarus and “weep while the wealthy few feast on what, in justice, belongs to all. Injustice is the perverse root of poverty.”

Every day, he said, the cry of the poor becomes louder, but it is increasingly ignored. Their cries are “drowned out by the din of the rich few, who grow ever fewer and more rich,” he said.

The pope established the World Day of the Poor to encourage the whole Church to reach out to those in need and let the poor know their cries have not gone unheard, the pope said in his message this year.

U.N. groups estimate there are some 700 million people in the world who are unable to meet their basic needs and that 10 percent of the world’s population lives in extreme poverty.