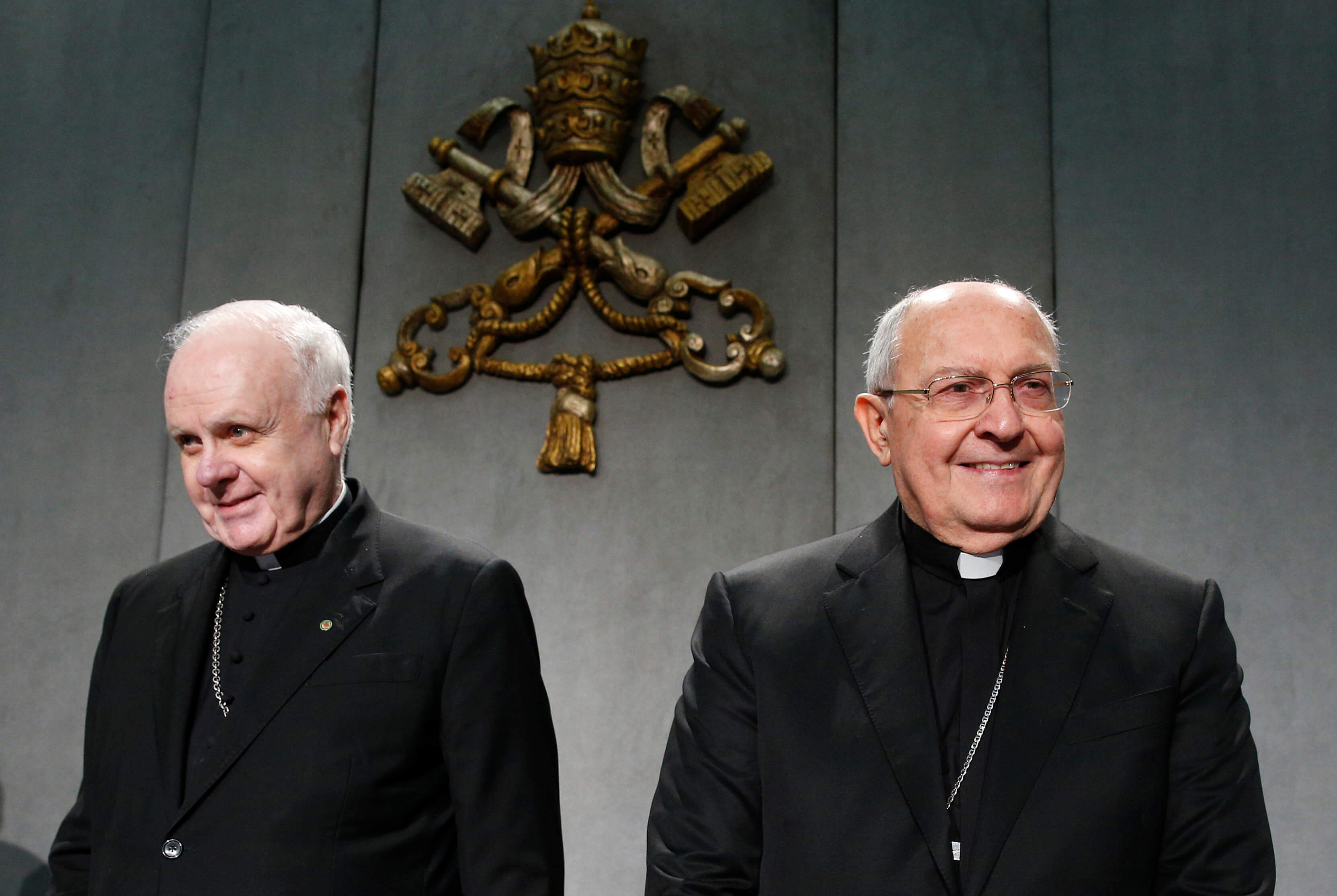 Photo Credit: CNS/Paul Haring - U.S. Cardinal Edwin F. O'Brien, grand master of the Knights of the Holy Sepulchre, and Cardinal Leonardo Sandri, prefect of the Congregation for Eastern Churches, arrive for a press conference at the Vatican Nov. 7. The Knights are preparing for a major meeting in Rome.

The 30,000 members of the Equestrian Order of the Holy Sepulchre of Jerusalem fund about 80 percent of the annual budget of the Latin Patriarchate of Jerusalem, ensuring that Catholic parishes and seminaries, schools and hospitals in Israel, Palestine and Jordan continue to function, said U.S. Cardinal Edwin F. O’Brien.

The cardinal, grand master of the Vatican-based order, said the knights and dames of the order come from 40 countries and pledge their prayers, their financial support and personal visits to the Holy Land to support the local Catholic communities there and to encourage ecumenical and interreligious dialogue and cooperation.

Every five years, leaders of the order from throughout the world gather for their general assembly, called a “consulta.” The meeting was scheduled for Nov. 13-16 in Rome and was expected to include an audience with Pope Francis.

Meeting with reporters Nov. 7, Cardinal O’Brien said the knights and dames “do not become involved in local government or political questions” in the Holy Land but offer support to the local Catholic Church there in cooperation with the Congregation for Eastern Churches.

Cardinal O’Brien said the order provides about $15 million each year in grants to Catholic projects in the Holy Land. Most are run by the Latin patriarchate, but the Maronite and Melkite Catholic churches also receive assistance.

The knights and dames of the Holy Sepulchre have given priority to education and formation programs, said Leonardo Visconti di Modrone, governor general of the order. By supporting 35 nursery schools and 41 elementary and high schools in Israel and Palestine, he said, the order’s members hope “to improve their quality and, through them, to make a fundamental contribution to the pacification of the region.”

About 57 percent of the 19,000 students in the schools are Christian, and most of the others are Muslim, he said. But all of them learn “our values of dialogue, tolerance and mutual respect,” which should help “overcome that violent confrontation that for years has martyred peaceful coexistence among people of different ethnic and religious groups.”

Cardinal O’Brien said each member of the equestrian order pledges to make a pilgrimage to the Holy Land at least once in his or her lifetime, but most go regularly. The pilgrimage is built around prayer and visits to the holy sites, but always includes visits to schools, clinics, parishes and other projects funded by the knights and dames.

The funds are disbursed as grants, the cardinal said, and members of the grant-making committee visit the Holy Land three times a year to monitor the projects.

The order’s headquarters near the Vatican occupies a small part of the 15th-century Palazzo della Rovere; most of the order’s building was rented out to a company that ran it as the Hotel Columbus. The order’s contract with the hotel company expired years ago and, after a court-ordered eviction was issued in 2016, the hotel closed in May.

Visconti said the Italian government is insisting that restoration work be carried out on the hotel’s 15th- and 16th-century frescoes, and plumbing and other work is underway. But, he said, the knights and dames hope to have a new company renting the building and running it as a hotel soon, because the rental income covers the order’s administrative costs, allowing all donations to go directly to the Holy Land.