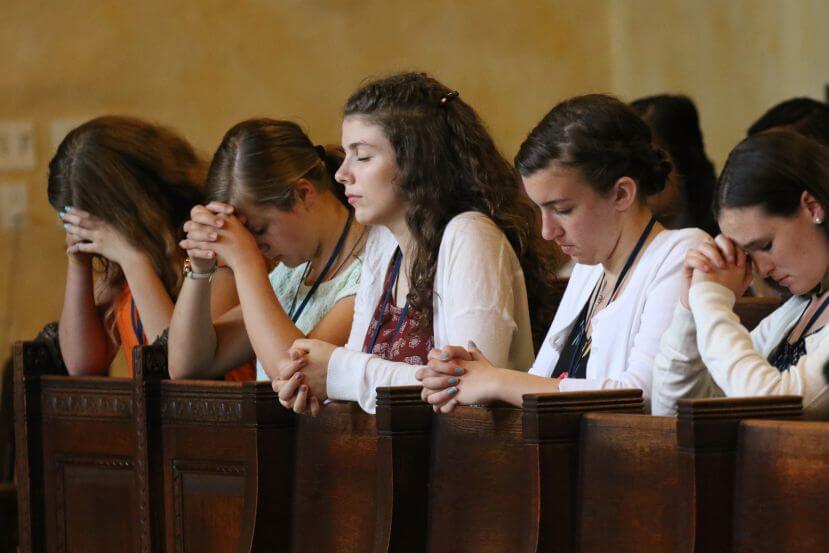 Photo Credit: CNS photo/Gregory A. Shemitz, Long Island Catholic - Campers pray in the chapel in early July during the Quo Vadis Camp at Immaculate Conception Seminary in Huntington, N.Y. Seventy-six teenagers from the New York Dioceses of Rockville Centre and Brooklyn attended the camp, which provided an opportunity for participants to have fun and deepen their faith while encouraging them to be open to God's call to the priesthood or religious life.

Men and women contemplating a vocation to the priesthood, consecrated life or marriage should not be afraid because God wants only for them to experience the joy that comes from serving others, Pope Francis said.

“Our slowness and our sloth” should not delay a response and Christians need not be “fearful of our limitations and sins, but instead open our hearts to the voice of the Lord,” the pope said in his message for the 2018 World Day of Prayer for Vocations.

“It will not fill our hearts if we keep standing by the window with the excuse of waiting for the right time, without accepting this very day the risk of making a decision,” the pope wrote. “Vocation is today! The Christian mission is now!”

The papal message for the day of prayer, which will be observed April 22, was released Dec. 4 at the Vatican. The 2018 theme is “Listening, discerning and living the Lord’s call.”

In his message, Pope Francis said God’s call “is not as clear-cut as any of those things we can hear, see or touch in our daily experiences” because God “comes silently and discreetly, without imposing on our freedom.”

Christians, he said, must learn to listen carefully and “view things with the eyes of faith” in order to listen to his voice which is “drowned out by the many worries and concerns that fill our minds and hearts.”

“We will never discover the special, personal calling that God has in mind for us if we remain enclosed in ourselves, in our usual way of doing things, in the apathy of those who fritter away their lives in their own little world,” the pope said.

Listening is increasingly difficult in today’s society, which is “over stimulated and bombarded by information” and “prevents us from pausing and enjoying the taste of contemplation” and discerning God’s plan, he said.

Often stifled by “the temptations of ideology and negativity,” he said, Christians need spiritual discernment which allows them to “discover the places, the means and situations through which” God’s calls them.

“Every Christian ought to grow in the ability to ‘read within’ his or her life and to understand where and to what he or she is being called by the Lord, in order to carry on His mission,” Pope Francis said.

He also urged men and women to live out their calling once it is discovered and “become a witness of the Lord here and now,” whether in marriage or priesthood or consecrated life.

“If (God) lets us realize that he is calling us to consecrate ourselves totally to His kingdom, then we should have no fear!” Pope Francis said.

“It is beautiful — and a great grace,” he said, “to be completely and forever consecrated to God and the service of our brothers and sisters.”