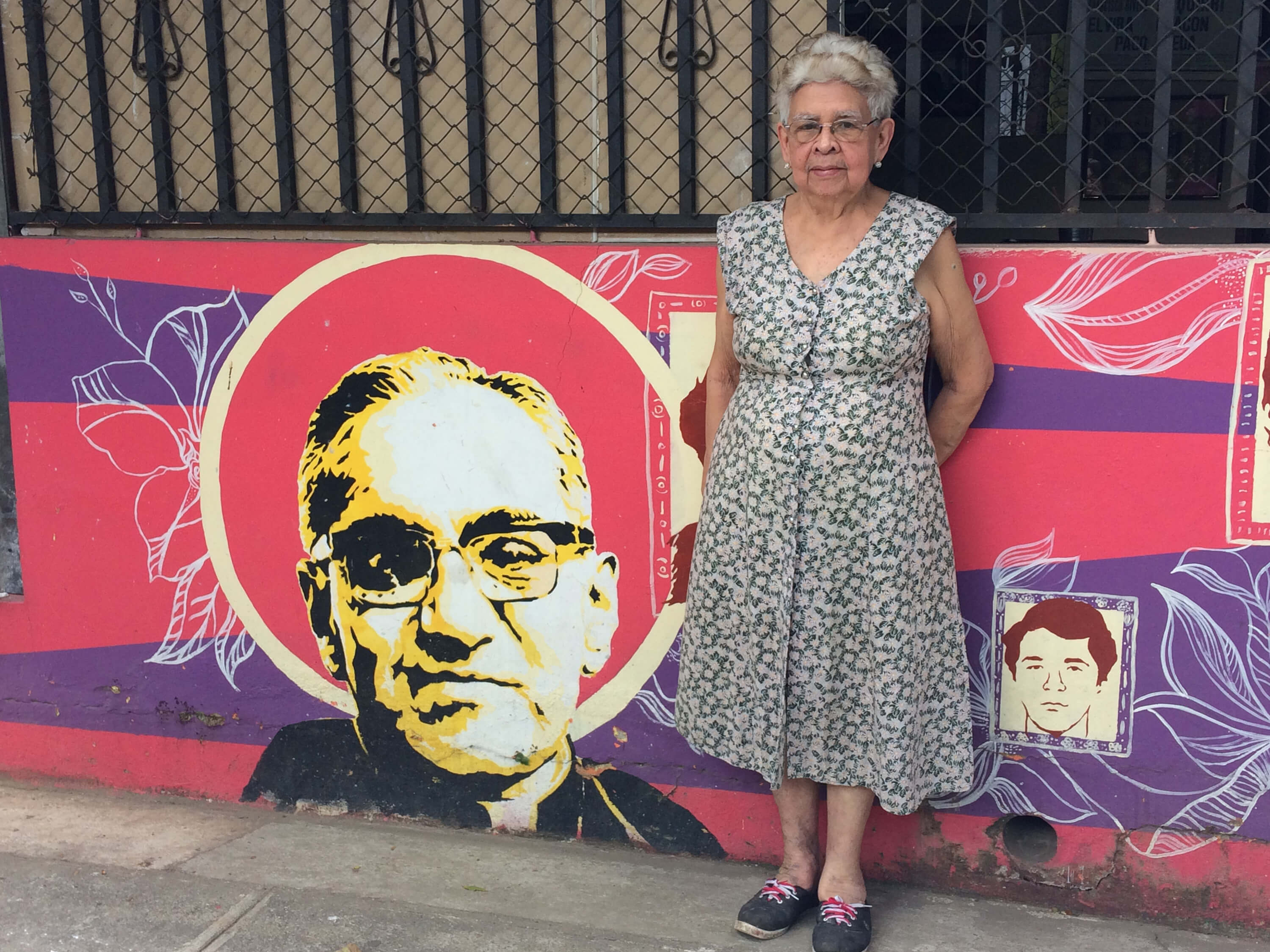 Photo Credit: CNS/Jo Tuckman - Leonor Chacon stands outside the small family restaurant in Santa Tecla, El Salvador, that she has turned into a shrine to Blessed Oscar Romero. The soon-to-be saint used to treat the place as a refuge from the growing tension of his pastoral life.

Baking under the summer sun so long awaited by beach goers and lake lovers, I may be one of the only people in New Jersey looking forward to the first flakes of snow.

Thoughts of my childhood in upstate New York, where snow was an almost daily occurrence from November to February, bring a smile to my face.

During last winter’s big storm, I uncovered several long lost videos beneath a pile of papers in my den, including one of my favorites, “Romero.”

While not the kind of movie you’d normally watch when you’re in the mood to curl up on the couch all warm and fuzzy, it is the kind of movie I watch at least once a year to remind me of what it means to be a disciple of Christ.

“Romero” is the powerful story of Archbishop Oscar Arnulfo Romero of El Salvador and his commitment to social justice and the poor. It is a disturbing movie, not only because of the violence, which was an historical reality, but because it challenges us as Christians to a moral vision that moves us from complacency and calls us, as Church, to live what Jesus preached through a preferential option for the poor.

What unfolds during the movie is a dynamic journey of faith demonstrating that conversion is always possible, even for a bishop.

A timid, orthodox, predictable bookworm, Bishop Romero was elected as archbishop in February of 1977 by conservative bishops who believed he would not make waves in a land ravished by conflict as rich and poor, brother and sister, fought against each other in the struggle for land reform.

Just one month later, following the brutal death of his friend, Father Rutilio Grande, along with two parishioners – a peasant farmer and a seven-year-old child – Archbishop Romero experienced a turning point, a conversion that would stir up its own storm leading to his assassination on the altar three years later as he raised the consecrated host and prayed.

Then, in a hospital chapel in March, 1980, Archbishop Romero spoke his last words before an assassin’s bullet took his life: “We know that every effort to better society, especially when injustice and sin are so ingrained, is an effort that God blesses, that God wants, that God demands of us.”

Pope Francis will declare him a saint on Oct. 14, recognizing him as a martyr who died defending human rights, justice and peace.

Though I have watched “Romero” innumerable times over the years, it continues to be a stark reminder of how far I often travel away from the path Jesus calls me to follow, the path of service and humility and surrender to God’s will.

Once, when I showed the movie to my adult faith formation class, one of my students sat in silence for a long time after the movie, finally saying to me, “I hate when you do that. You ask me to think about how I’m living my faith. I was comfortable with it all before this movie. Now I’m not comfortable anymore.”

Archbishop Romero reminds us that “we must overturn so many idols, the idol of self first of all, so that we can be humble, and only from our humility can learn to be redeemers, can learn to work together in the way the world really needs.”

Conversion doesn’t only happen in the middle of war. It happens on street corners, in prison cells, in the work place, in our classrooms, in our homes and during snow storms.

The important thing is that, with hearts open to God, it happens.