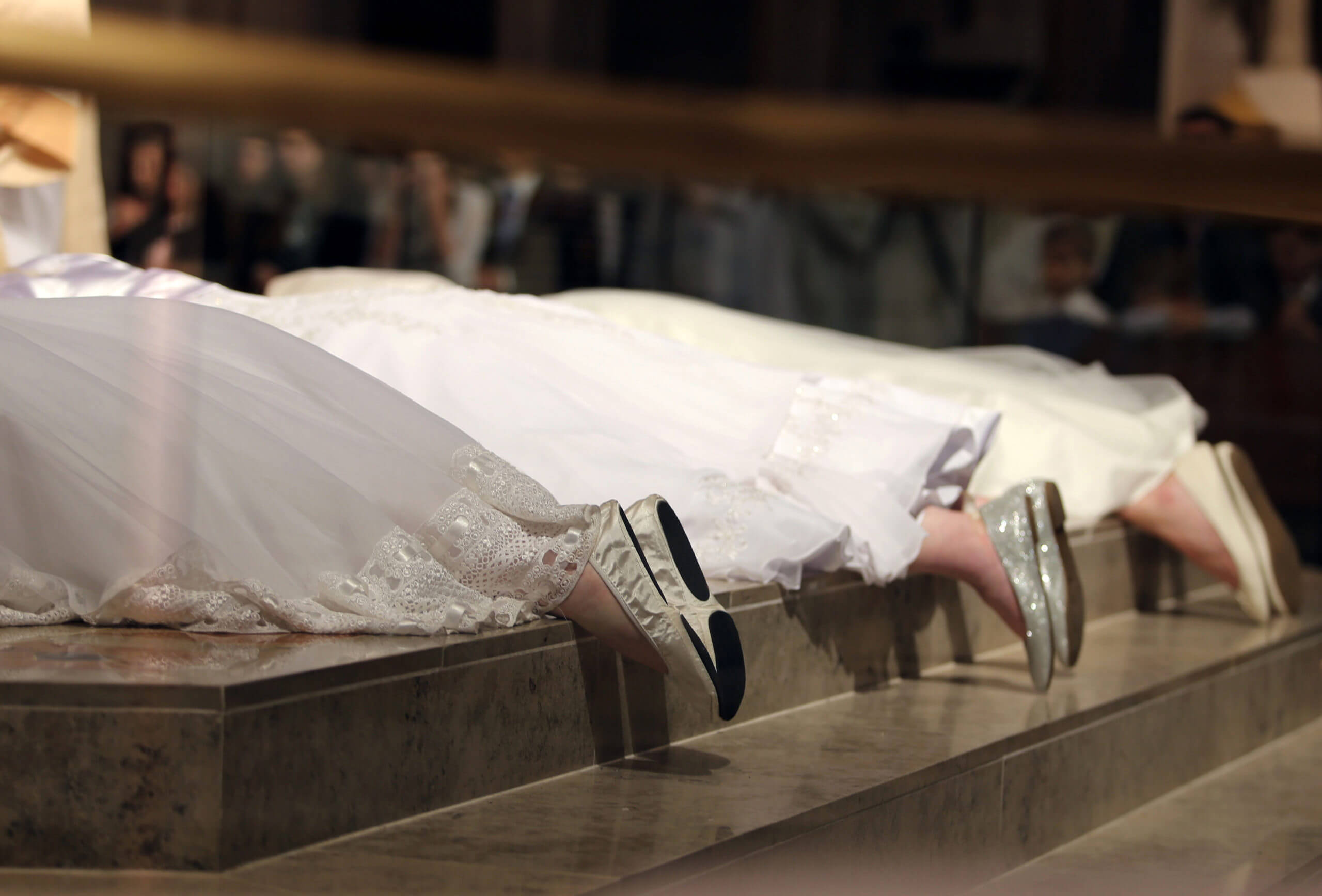 Photo Credit: CNS/Joel Breidenbach - Three women consecrated as virgins lie prostrate during a 2017 ceremony at the Cathedral of the Most Blessed Sacrament in Detroit. Pope Francis praised consecrated virgins June 1, the 50th anniversary of St. Paul VI's revival of the "Ritual for the Consecration of Virgins."

Women who have discerned a call to consecrate their virginity to God in service to the Church must be living signs of God’s love in the world, especially where too many people live in poverty or suffer from discrimination, Pope Francis said.

“Be women of mercy, experts in humanity. Women who believe in the ‘revolutionary nature of love and tenderness,'” the pope said in a message to the estimated 5,000 women around the world who formally belong to the Order of Virgins.

Pope Francis’ message, released by the Vatican June 1, marked the 50th anniversary of St. Paul VI’s revival of the “Ritual for the Consecration of Virgins.”

The women, who — unlike members of religious orders — are consecrated by a local bishop and make their own living arrangements and decisions about work, were scheduled to meet at the Vatican to mark the anniversary. The Covid-19 pandemic forced the cancellation of their meeting.

“Your virginal consecration helps the Church to love the poor, to discern forms of material and spiritual poverty, to help those who are weak and vulnerable, those suffering from physical and mental illness, the young and the elderly, and all those in danger of being marginalized or discarded,” the pope told the women.

The coronavirus pandemic, he said, has shown the world how necessary it is “to eliminate inequalities, to heal the injustice that is undermining the health of the entire human family.”

For Christians, he said, it is important to be disturbed and concerned by what is happening around them; “do not close your eyes to it and do not flee from it. Be present and sensitive to pain and suffering. Persevere in proclaiming the Gospel, which promises fullness of life for all.”

The women’s consecration gives them “chaste freedom” in relating to others, being a sign of Christ’s love for the Church, which is “virgin and mother, sister and friend of all,” the pope said.

“By your gentleness, weave a web of authentic relationships that can help to make the neighborhoods of our cities less lonely and anonymous,” he told them. “Be forthright, capable of parrhesia (boldness), but avoid the temptation to chatter and gossip. Have the wisdom, the resourcefulness, and the authority of charity, in order to stand up to arrogance and to prevent abuses of power.”

Share This Post
Vocations, Consecrated Virgins, Ritual for the Consecration of Virgins, Order of Virgins
See More
Last Article
Statement of U.S. Bishops’ President on George Floyd and the Protests in American Cities
Next Article
Vatican official: Racism is ‘spiritual’ virus that must be wiped out
Back to Vermont Catholic Magazine