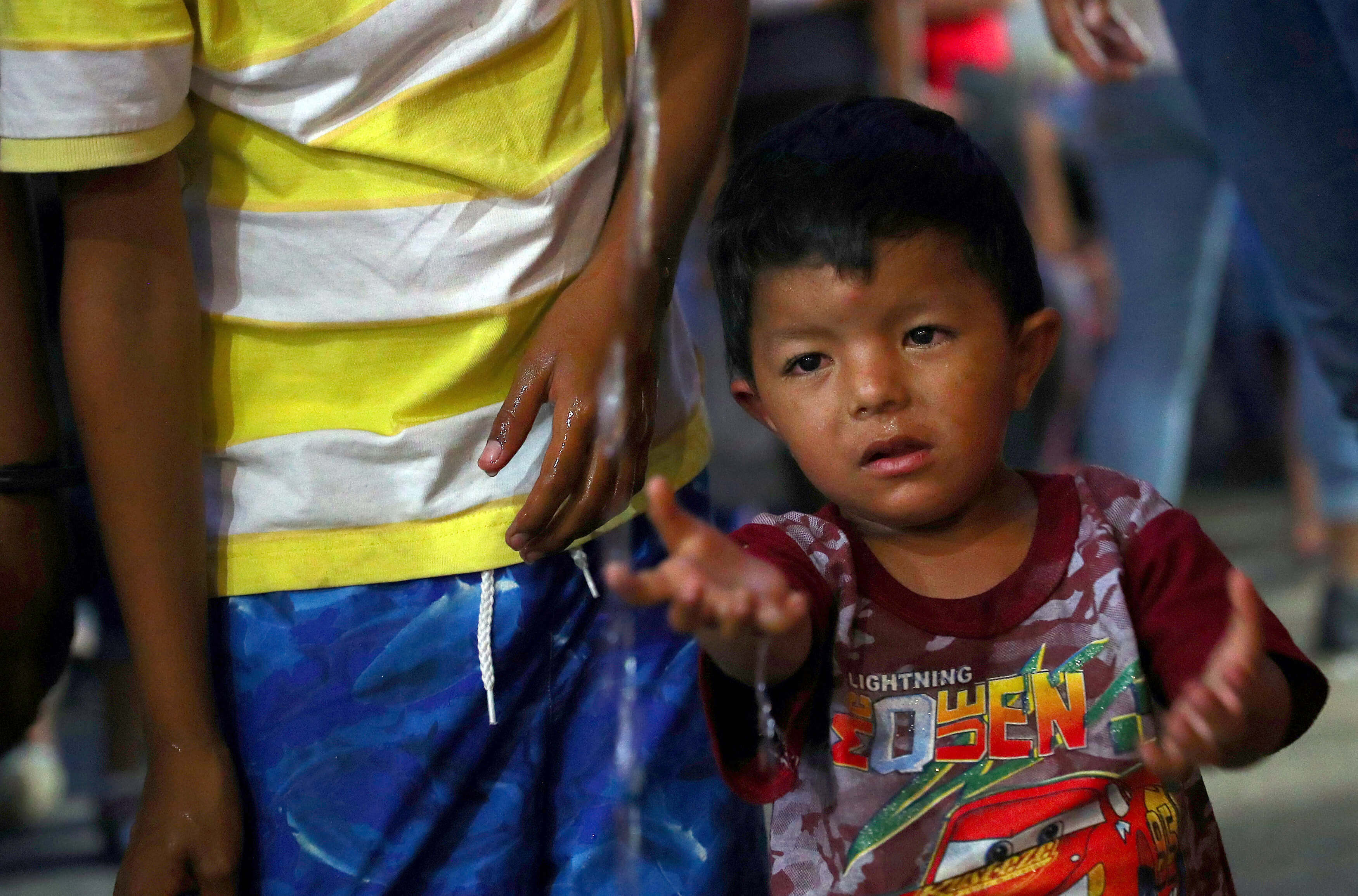 Photo Credit: CNS/Hannah McKay, Reuters - A migrant boy, part of a caravan of thousands traveling from Central America to the United States, washes his hands Oct. 29 in a makeshift camp in Santiago Niltepec, Mexico. Countries do not develop by themselves; they are built by migrants, Pope Francis said in remarks Oct. 29 to a group of Scalabrinian Missionaries.

As a group from Central America heads to the border between the U.S. and Mexico, the Trump administration is said to be getting ready to send troops to meet them and Catholic groups are asking that the migrants be treated humanely.

“As Catholic agencies assisting poor and vulnerable migrants in the United States and around the world, we are deeply saddened by the violence, injustice, and deteriorating economic conditions forcing many people to flee their homes in Central America,” said an Oct. 29 joint statement from the chairman of the U.S. bishops’ migration committee and the president and CEO of Catholic Relief Services and of Catholic Charities USA.

“While nations have the right to protect their borders, this right comes with responsibilities: Governments must enforce laws proportionately, treat all people humanely and provide due process,” said the three Catholic leaders, committee chairman Bishop Joe S. Vasquez of Austin, Texas, Sean Callahan of CRS and Dominican Sister Donna Markham of Catholic Charities.

The mobilization of migrants is believed to have formed sometime in mid-October and comprised of mostly Honduran migrants seeking refuge from violence and poverty at home. It seems that, spontaneously, others from nearby countries have joined their ranks as the group travels north, likely seeking to ask for asylum in the United States.

“We urge the administration to manage refugee arrivals humanely and in a manner that respects their dignity and rights under U.S. and international law,” said an Oct. 26 statement by the Leadership Conference of Women Religious.

“These people simply want to live with their families free of fear. According to international law, they have a right to seek asylum where they feel safe,” said the Washington-based Franciscan Action Network in an Oct. 24 news release expressing solidarity with the group.

LCWR and the Franciscan network both denounced statements that insinuated the group of migrants is made up of people wanting to harm the population of the United States, including some made by President Donald Trump.

The Franciscan Action Network also defended the group of migrants and called on the general public to “separate fact from fiction.”

“As a nation of immigrants, we should welcome those who are escaping violence and persecution with open arms. Those in the migrant caravan are not gang members or terrorists, in fact many have family members in the United States who are citizens,” the network said in its statement. “These people simply want to live with their families free of fear. According to international law, they have a right to seek asylum where they feel safe.”

Bishop Vasquez, Callahan and Sister Markham also said in their joint statement that they “affirm that seeking asylum is not a crime” and urged “all governments to abide by international law and existing domestic laws that protect those seeking safe haven and ensure that all those who are returned to their home country are protected and repatriated safely.”

The three said they “strongly advocate for continued U.S. investments to address the underlying causes of violence and lack of opportunity in Central America. Our presence throughout the Americas has convinced us that migration is a regional issue that requires a comprehensive, regional solution.”

“An enforcement-only approach does not address nor solve the larger root causes that cause people to flee their countries in search of protection,” they said, adding: “As Christians, we must answer the call to act with compassion towards those in need and to work together to find humane solutions that honor the rule of law and respect the dignity of human life.”

The Hope Border Institute of El Paso, Texas, published information Oct. 26 about the group being referred to as a “caravan,” which it says numbers between 3,000 and 7,000 people and, of those, about 2,000 are youth and children.

Many Catholic grass-roots groups have joined other humanitarian organizations in providing food and shelter for the migrants along the way.

In its information, the Hope Border Institute says the group may arrive at the U.S.-Mexico border “sometime between Thanksgiving and Christmas, or possibly sooner” and faith-based and other human rights groups are preparing to help.

News reports say the Trump administration is preparing legal action before that happens, hoping to block the group from entering, including issuing an executive order that will deny entry for those seeking asylum.