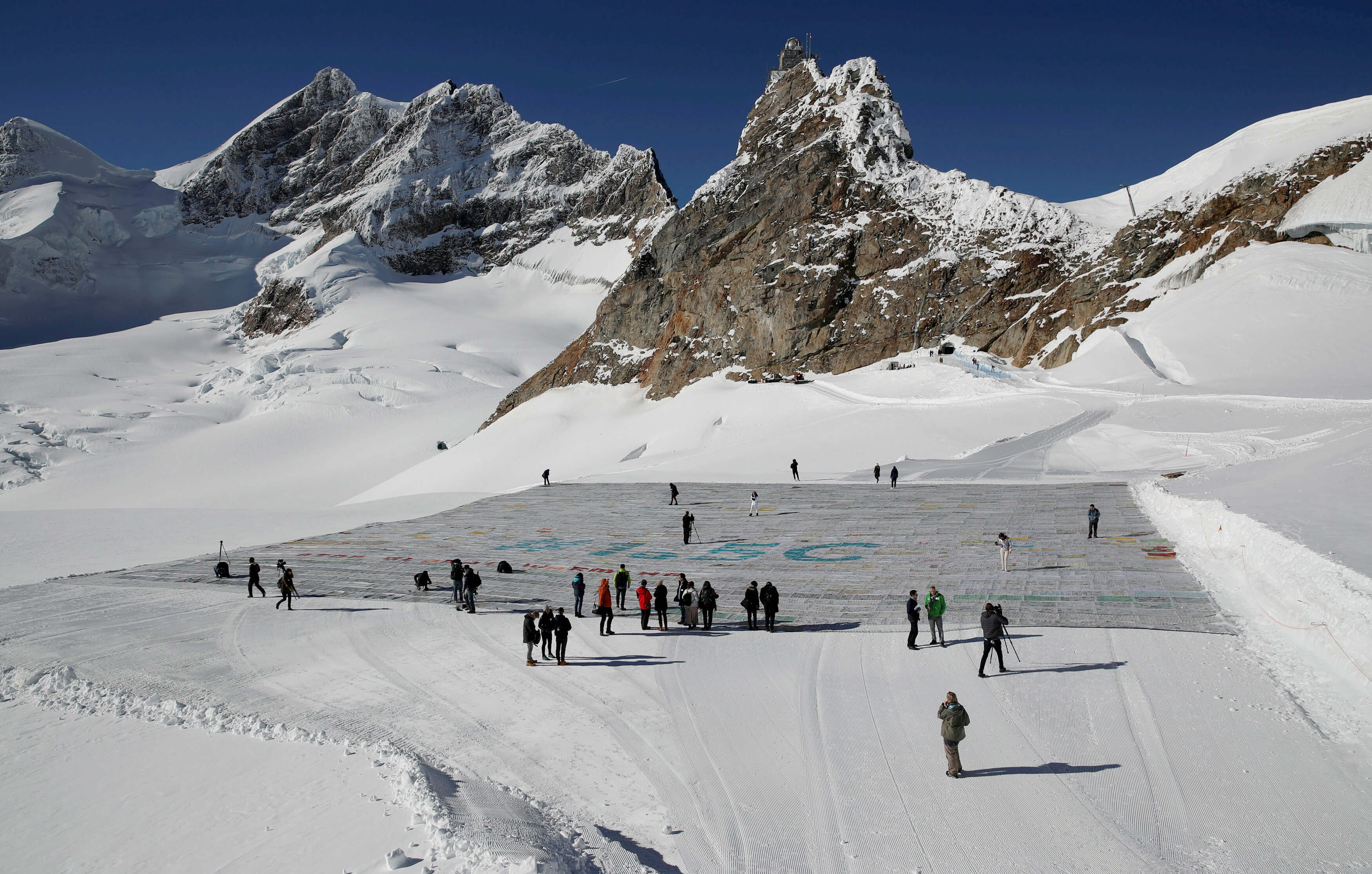 Photo Credit: CNS/Arnd Wiegmann, Reuters - People walk amid 100,000 postcards against climate change Nov. 16 on Switzerland's Aletsch glacier. The messages were sent by young people from throughout the world.

As government delegations from across the globe prepare for a Dec. 2-14 U.N. conference on climate change, Catholic organizations are pledging to make the Church’s voice heard.

CIDSE, a network of 17 Catholic development agencies from Europe and North America based in Brussels, will join other Catholic aid organizations in Katowice, Poland, for the 24th U.N. Climate Change Conference, which is expected to propose measures for restricting temperature increases to 1.5 degrees Celsius.

“Over the past year, there have been fears of a loss of energy — that ambition and commitment are being deflated by the magnitude of the tasks ahead,” said Josianne Gauthier, CIDSE secretary-general. “But we’ve been called out by the world’s most vulnerable countries to make the bold changes needed to restrict global warming — not by seeking the lowest common denominator, but by joining in courageous actions.”

“While governments have to comply with global emission reduction goals, actors below government level can also have a major impact with a shared vision for reversing current trends,” said Opromolla. “What absolutely cannot happen is that we just continue with business as usual.”

“We’ve seen a growing interest in the Catholic Church as a moral leader and globally recognized authority, so I’ve no doubt its voice will be listened to,” she said.

Cardinal Pietro Parolin, Vatican secretary of state, and Cardinal Peter Turkson, prefect of the Dicastery for the Promoting Integral Human Development, will lead a delegation from the Holy See.

In an Oct. 26 statement, Church leaders from five continents called for the conference to be a “milestone on the path set out in 2015,” by encouraging “urgency, intergenerational justice, human dignity and human rights.”

They added that Pope Francis had demanded “rapid and radical changes” in his 2015 encyclical “Laudato Si’, on Care for our Common Home.” They called on countries with heavy carbon emissions to “take political accountability and meet their climate finance commitments.”

The statement said the Catholic Church worldwide was now supporting a “shift toward more sustainable communities and lifestyles,” including disinvestment from fossil fuels in favor of renewable energy, and was “rethinking the agriculture sector” to promote agro-ecology.

“We must resist the temptation to look for solutions to our current situation in short-term technological fixes without addressing the root causes and the long-term consequences,” said the signers, who included Cardinal Oswald Gracias of Mumbai, president of the Federation of Asian Bishops’ Conferences, and Cardinal Ruben Salazar Gomez of Bogota, Colombia, president of the Latin American bishops’ council. Their counterparts from Europe, Africa and Oceania also signed the letter.

The bishops’ statement was welcomed as a “strong indication” of global Catholic commitment to climate justice by Tomas Insua, director of the Boston-based Global Catholic Climate Movement, who said he counted on political leaders to “take up the challenge” when “every notch in the global thermometer is a tragedy for the most vulnerable.”

Gauthier also welcomed the statement’s support for “deep societal change,” adding that Catholic experts would work with representatives of other religions at Katowice to “make noise and instill hope” around the shared goals of “justice, dignity and care for creation.”

“I think there’s a thirst for another kind of discourse now, something less technical and with a more human face. This is where churches and religious communities can offer vital help,” she added.

A U.N. website statement said the conference’s main objective would be to adopt implementation guidelines for the 1.5-degree limit adopted under a 2015 Paris Climate Change Agreement.

It added that the U.N.’s Intergovernmental Panel on Climate Change had recently warned net carbon dioxide emissions must reach zero by 2050 to meet the Paris target, thus reducing “the risks to human well-being, ecosystems and sustainable development.”

In a Nov. 22 report, the Geneva-based World Meteorological Organization said levels of heat-trapping greenhouse gases, including carbon dioxide, methane and nitrous oxide, had reached a new record high, driving increases in sea levels, ocean acidification and more extreme weather, with “no sign of a reversal in the trend.”

A separate Nov. 27 emissions report by the U.N. Environment Programme tracked policy commitments by countries to reduce emissions and said these were trailing behind official targets.