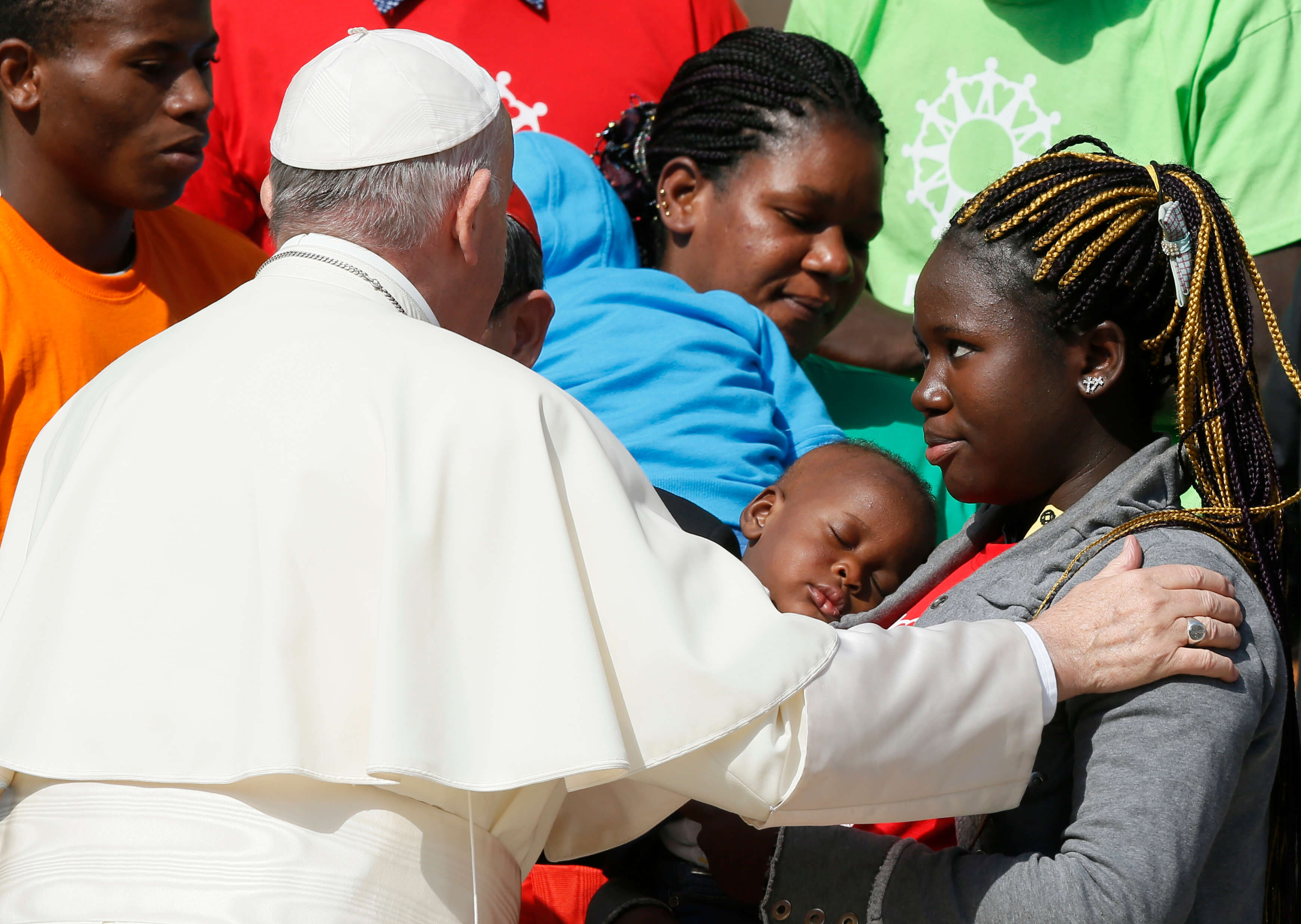 Photo Credit: (CNS photo/Paul Haring) - Pope Francis greets immigrants and representatives of Caritas Internationalis during his general audience in St. Peter's Square at the Vatican. Days before the U.S. celebrated Mother's Day May 13, the national group Faith in Action urged others to think about immigrant mothers who have been separated from their children or run the risk of never seeing them again.

Days before the U.S. celebrated Mother’s Day May 13, the national group Faith in Action urged others to think about immigrant mothers who have been separated from their children or run the risk of never seeing them again.

During a May 8 conference call, Faith in Action, a grass-roots faith-based network in the United States, featured three women from around the country currently seeking refuge from deportation in various properties affiliated with religious organizations. They also called attention to plans by the Trump administration to separate children from parents if they’re caught trying to cross the border without legal permission.

“Few things are as crystal clear in Scripture as the fact that we are to welcome the sojourner, to treat our neighbors as ourselves … and our immigrant neighbors are indeed our neighbors,” said the Rev. Julie Peeples, senior pastor at Congregational United Church of Christ, in Greensboro, North Carolina, during the call.

She was one of two faith leaders who helped highlight the stories and plight of immigrant mothers such as Juana Ortega, a mother of four who is originally from Guatemala. Her husband is a U.S. citizen but because of a prior deportation order, she cannot stay in the country. When Immigration and Customs Enforcement gave her a month to leave, she couldn’t handle the thought of leaving her children behind, she said, so she sought sanctuary at a local church, afraid that immigration agents would physically remove her from her home. She’s been residing in a church in North Carolina for almost a year.

“This situation has affected my family. My husband thinks my youngest son is falling into a depression,” she said in tears.

Vicky Chavez, who lives in Salt Lake City, said she made the decision to take her two girls to live with her when she went to seek sanctuary in a Utah church. As of May 8, they had been there 97 days, she said, because she’s afraid she’ll be deported to Honduras, where she runs the risk of death, she said.

“It’s hard being in sanctuary,” she said. “I can’t have a normal life with my daughters.”

Faith in Action, formerly known as the PICO National Network, said about 1,000 religious congregations in more than 200 cities and towns have decided to help women like Chavez and Ortega all around the country. Many of the women find themselves with families that have a mix of immigration statuses: Some children were born in the U.S., others weren’t, or the women are married to a citizen but for one reason or another cannot legalize their status.

The Rev. Noel Andersen, national grass-roots coordinator for Church World Service, said the movement by faith groups to help the immigrant women is part of an effort to show solidarity but also to confront “unjust laws, to fight deportation orders so they can stay united with their families.”

“As we approach Mother’s Day, we are fighting for these moms to get relief from deportation,” he said, “to be able to go home and be with their family. They are being targeted in an unjust way.”

The group also objected to comments made by U.S. Attorney General Jeff Sessions, who said during a May 7 trip to Arizona that there would be “zero tolerance” for those crossing the border illegally with their children.

“If you are smuggling a child, then we will prosecute you, and that child will be separated from you as required by law. If you don’t like that, then don’t smuggle children over our border,” Session said.

Ashley Feasley, policy director for Migration and Refugee Services at the U.S. Conference of Catholic Bishops in Washington, said if the “zero tolerance” policy is implemented, it will lead to a drastic increase in forcible family separation at the border.

“The dangers of such a policy are many. First, this will lead to family separation as parents will be put into immigrant detention or taken by the U.S. Marshals,” she said. “Next, it is extremely traumatic for children to experience this separation. They have just been on a traumatic journey and increasingly we are seeing very young children (under 5), so separating parents from young exhausted children and leaving them with strangers, who many times do not speak their language, is a terrifying experience for children.”

Feasley also said it would be extremely costly to the U.S. taxpayer, costing up to $620 per night per family of three.

“It will also erode judicial efficiency, taking away resources to prosecute the most dangerous, in favor of prosecuting every parent,” she added. “Most importantly it is inhumane and goes against our Catholic values and the sanctity of the family,”

Catholics, she said, should try to remember the human dignity of all families and children who arrive and look to assist them, not to condemn them.

“As Pope Francis says, they are not a problem or a burden but an opportunity for encounter,” she said.