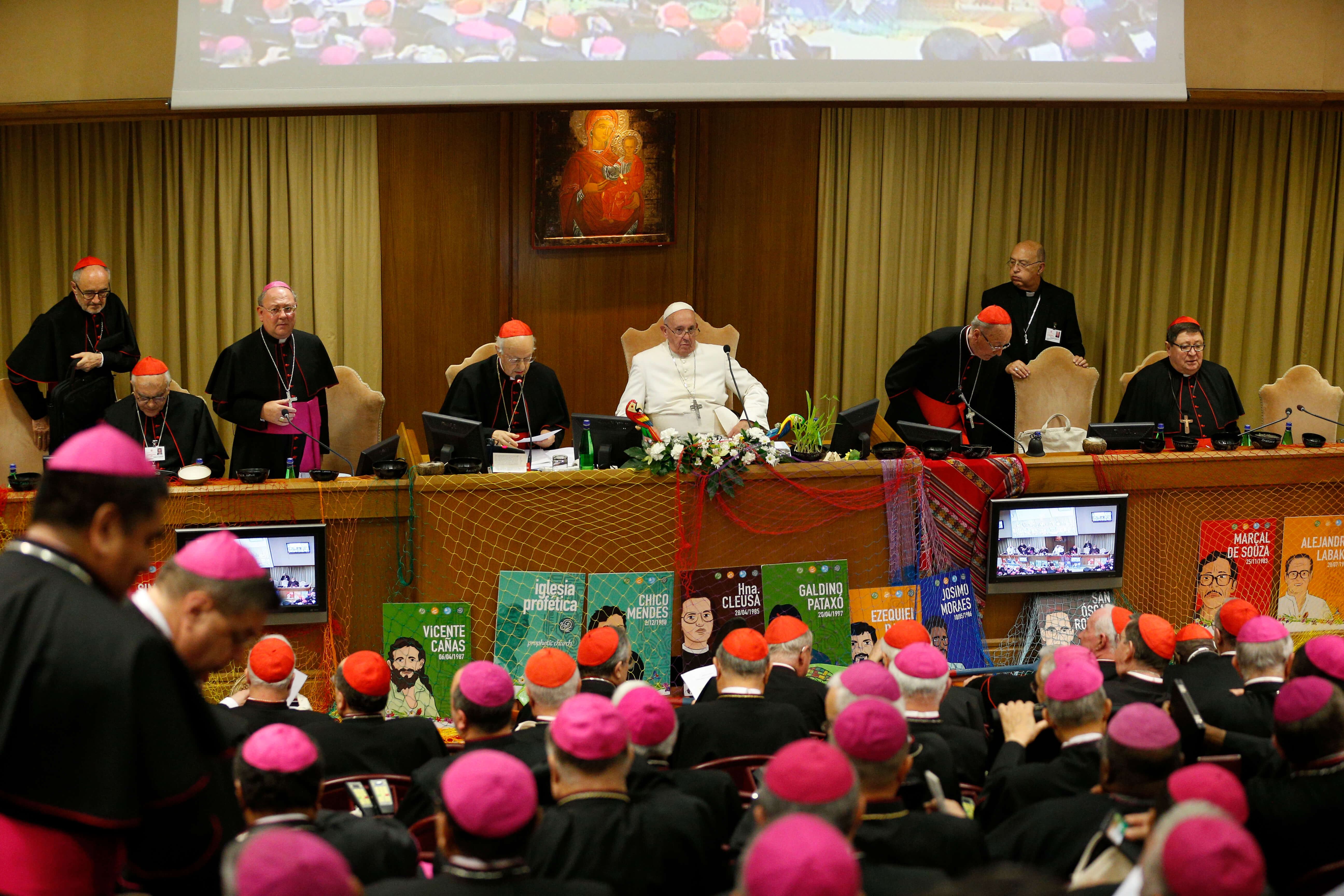 Photo Credit: CNS/Paul Haring - Pope Francis attends the final session of the Synod of Bishops for the Amazon at the Vatican.

The “unprecedented” environmental and social crisis in the Amazon calls for “a deep personal, social and structural conversion” that leads to new ways of caring for “our common home,” according to the Synod of Bishops for the Amazon.

In seeking new forms of development that are just and promote solidarity, the Church must learn from the region’s original peoples “in a dialogue of wisdom,” synod members said in their final document, released Oct. 26.

“God has given us the earth as a gift and as a task, to care for it and to answer for it; we do not own it,” the synod members wrote.

Caring for the earth requires an integral ecology that connects “the exercise of care for nature with the exercise of justice for the most impoverished and disadvantaged on earth,” they wrote.

Integral ecology, they said, is not just one path open, “it is the only path, because there is no other viable route for saving the region.”

The economies of the nine Amazonian countries still depend heavily on revenues from raw materials like oil, metals and timber, as well as industrial farming and ranching.

Such activities “uproot the lives of peoples and the common goods of the earth, concentrating economic and political power in the hands of a few,” often with the support or permission of local, national and foreign governments, the document said.

Although it may not be possible to change that model of development in the short run, the church must decide where it stands, and what implications faith has for politics and ethics, the synod members said.

Denouncing the destruction and human rights violations related to extractive industries, synod member also affirmed their support for campaigns that call for institutions, including the church, to give up investments in extractive companies that cause environmental damage or social harm.

They also called for energy policies that drastically reduce greenhouse gas emissions, which cause global warming, and promote clean energy alternatives that contribute to better health.

“The future of the Amazon is in the hands of us all, but it depends mainly on our immediately abandoning the current model that is destroying the forest, not bringing well-being and endangering this immense natural treasure and its guardians,” they wrote.

Those guardians are the Amazonian communities, especially indigenous peoples, who protect the forests and rivers of the Amazon.

“They have clearly stated that they want the Church to accompany them, to walk with them, and not to impose on them a particular way of being, a specific form of development that has little to do with their cultures, traditions and spiritualties,” the synod members wrote.

“They know how to take care of the Amazon, how to love and protect it,” they added. “What they need is for the Church to support them.”

Indigenous people who were observers at the synod asked the church to back them in their demand for legal recognition of their territories, to protect against incursions by illegal loggers and miners or the concession of their lands to development projects or extractive industries. The synod document specifically mentioned the importance of defending territories inhabited by semi-nomadic people who shun contact with outsiders.

People who publicly defend their territorial rights are often criminally prosecuted, harassed or targeted for assassination, indigenous synod participants said. In the document, the synod members said the church must support them against persecution.

The Church also must help Amazonian peoples preserve and maintain their traditional “knowledge, innovations and practices,” the synod participants said, and must support their right to decide about plans and proposals for sustainable development in their territories.

In the process of “deep personal, social and structural conversion” in defense of the Amazon, the Church and others must “unlearn, learn and relearn” in order to avoid repeating “colonializing models that have caused harm in the past,” the synod members said.

Such a conversion requires recognition of “ecological sins of commission or omission against God, against one’s neighbor, the community and the environment,” which are also “sins against future generations,” they wrote. Those sins include pollution, environmental destruction, and transgressions against interdependence and justice.

The synod called for parishes and dioceses to create ministries of “care for our common home,” to promote integral ecology, raise awareness of the teachings in Pope Francis’ encyclical “Laudato Si’,” and engage in education and advocacy.

As a follow-up to the synod, the members proposed creation of a pastoral office that would work with Church institutions, other organizations and representatives of indigenous peoples to track socio-environmental conflicts and help the church “take a position, make decisions and defend the rights of the most vulnerable.”

“The Church has been and is at the side of the indigenous communities,” they wrote, “to safeguard the right to have their own tranquil life, respecting the values of their traditions, customs and cultures, the preservation of rivers and forests which are sacred spaces, sources of life and wisdom.”