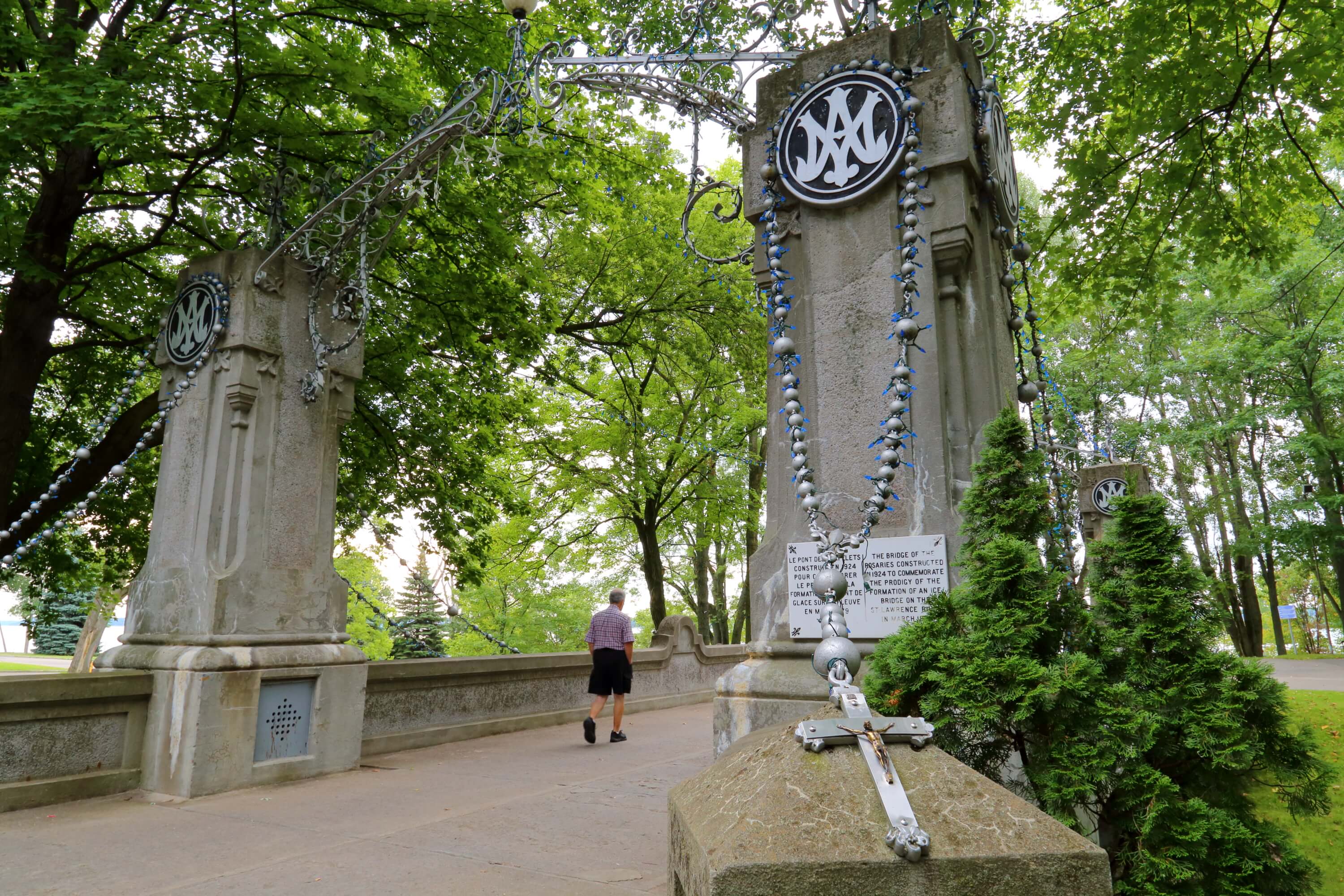 Photo Credit: CNS/Philippe Vaillancourt, Presence - A man walks across the "Rosary Bridge" in 2017 at the shrine of Cap-de-la-Madeleine in Trois-Rivieres, Quebec. In Canada, the new French translation of the Our Father takes effect Dec. 2.

French-speaking Canadians will begin using a new translation of the Our Father Dec. 2.

The passage “lead us not into temptation” — that formerly read “do not subject us to temptation” in French — is changed for “do not let us enter into temptation.” The change brings the phrasing closer to its Greek origins and also bears witness to a theological evolution.

“With ‘do not subject us to temptation,’ we had complaints that it’s as if God is the one submitting us to temptation. By saying ‘do not let us enter,’ we are closer to what Jesus says,” explained Bishop Serge Poitras of Timmons, Ontario, a member of the Episcopal Commission of Liturgy and Sacraments, French Sector, of the Canadian Conference of Catholic Bishops.

Several experts believe that the French wording, in use since 1966, was confusing to the faithful.

“Many people didn’t understand. It is God who tempts us?” Bishop Poitras said.

In Canada, the bishops’ conference decided to follow other French-speaking countries, including Benin, France and Switzerland, which already use the new translation without waiting for the new missal.

“This was the so-called ecumenical translation. But some Francophone Orthodox communities did not even use it, for example,” he said, stressing that ecumenical relations had to be considered before endorsing the new translation.

Canadian Dioceses where French is in use have been explaining the change in recent weeks. In a message addressed to parishioners in early November, Bishop Andre Gazaille of Nicolet, Quebec, wrote that the new version “better reflects the spirit of the prayer taught by Jesus to His disciples.”

Greek Gospels in hand, Alain Gignac, director of the University of Montreal’s Institute of Religious Studies, explained that the phrase, found in the Gospels of Matthew and Luke, can be translated literally by “let us not go in the direction of temptation.”

He said the Our Father was constructed borrowing from both Gospels.

“Originally, it’s an oral tradition that is neither from Luke nor Matthew. … First in Aramaic, then translated into Greek, then into Latin, the Our Father that we pray today draws from these two evangelists,” he said. The prayer attributed to Jesus has several differences of one Gospel to another, he added.

Gignac welcomed the new translation while recalling its limits.

“We must give up on retracing the exact Our Father that came out of the mouth of Jesus,” he said.

Liturgy, Bishop Poitras explained, borrows from Hebrew, Greek and Latin, which remains the official language of the Church. In translating the Bible, liturgists consider the original language as well as how it sounds when spoken aloud.

“We are at some distance from the Gospel phrasing. We are indeed in a theological construction,” he said.

“The Our Father builds an image of God. A passage like this (‘do not let us enter into temptation’) can be an opportunity for reflection for communities or families on its underlying image of God,” she said.

“Does the image of a God who wants to tempt His children match what the Gospel proclaims? The (translation) issue may seem trivial, but … it shapes our image of God. The ritual builds the person. The Our Father builds our faith, and our way of living our faith.”