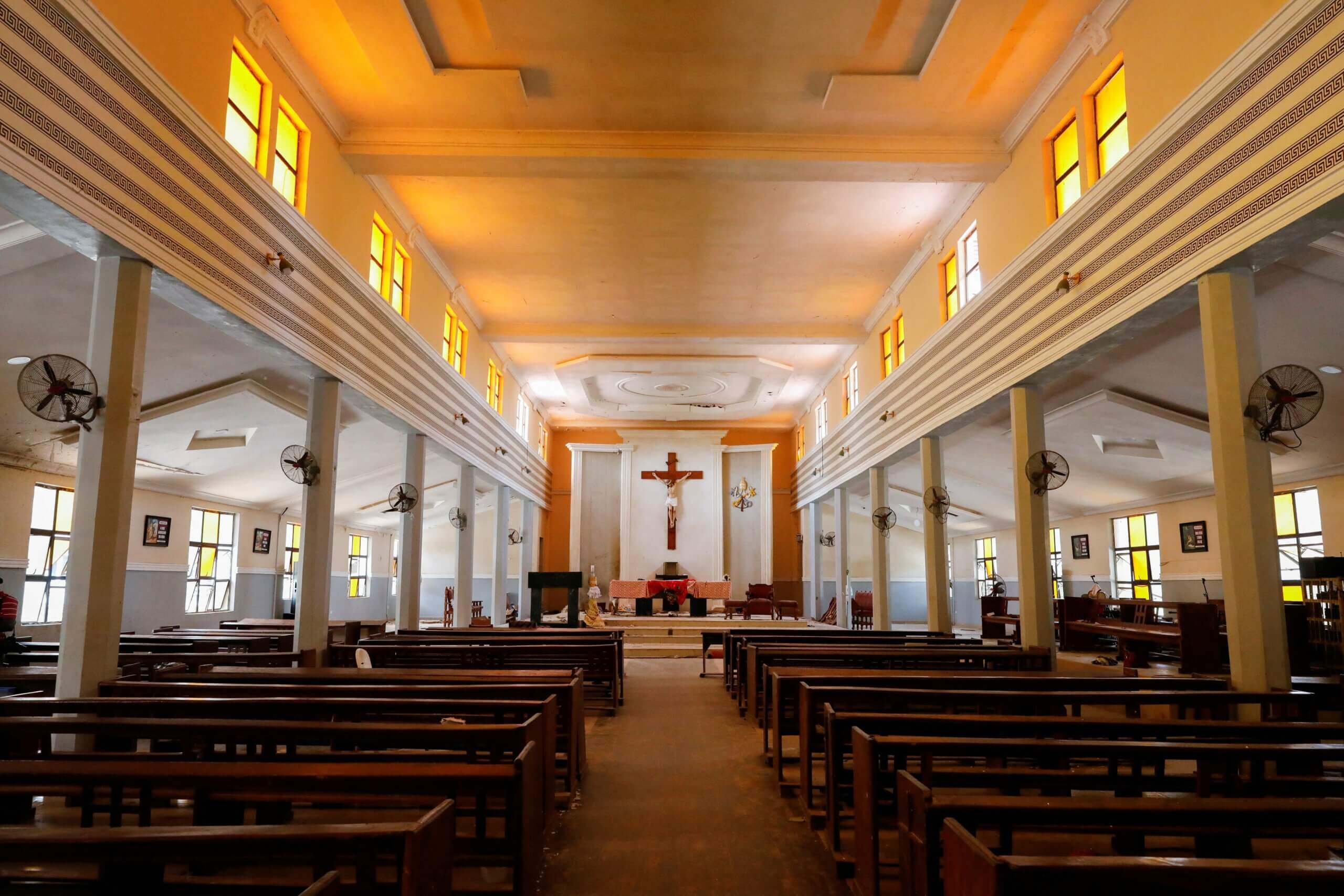 Photo Credit: CNS/Temilade Adelaja, Reuters - St. Francis Xavier Church is seen the day after worshippers were attacked by gunmen during Pentecost Mass, in Owo, Nigeria, June 5. Reports said at least 50 people were killed in the attack.

The brutal attack on people at a Catholic church in Nigeria on Pentecost Sunday is “an attack on the entire church,” said a U.S. official of Aid to the Church in Need, an international Catholic charity.

According to the Reuters news agency, gunmen fired at people inside and outside St. Francis Xavier Church in Owo, located in the southwestern state of Ondo. At least 50 people were reportedly killed during Mass June 5. Dozens more were injured and rushed to nearby hospitals.

“We extend our prayers for the victims, the wounded, their families and the entire Catholic community of Owo,” said George Marlin, chairman of the board of Aid to the Church in Need/USA, which is based in New York. “We stand with the Diocese of Ondo to help treat the wounded and those traumatized by this horrible tragedy.”

“This is the latest in the ongoing wave of brutal attacks on Nigeria’s Christians,” he said in a June 6 statement. “Political and religious leaders around the world must condemn this barbarism and put pressure on Nigerian President Muhammadu Buhari to do what it takes finally to stop the violence and protect the Nigerian people.”

Marlin called it “imperative” that the U.S. State Department “reinstate Nigeria as a Country of Particular Concern that violates religious freedom. Christians are not the only victims of faith-based violence in Nigeria, but they are the principal target,” he stated.

On Nov. 17, 2021, as required by the International Religious Freedom Act, U.S. Secretary of State Antony Blinken identified 10 “Countries of Particular Concern” — those who are in severe violations of religious freedom — but he omitted Nigeria. The announcement was met immediately with severe criticism by human rights and religious rights organizations.

On June 2 of this year, in releasing the State Department’s 2021 Report on International Religious Freedom, Blinken noted that in Nigeria, “several state governments are using antidefamation and blasphemy laws to punish people for expressing their beliefs.”

No group had claimed responsibility for the attack in Owo as of June 6.

Aid to the Church in Need, which serves “the suffering and persecuted church” around the world, “will come to the aid of our brothers and sisters in Nigeria in solidarity of prayer and support,” Marlin added.

In other U.S. reaction, Cardinal Timothy M. Dolan of New York also noted that the attacks in Owo are the latest “in a growing number of attacks on Christians in Nigeria,” but he called the June 5 attack “especially horrific” because at least 50 worshippers “were slaughtered merely for gathering to celebrate the great feast of Pentecost,” recognized traditionally as the “birthday of the Church.”

“We pray for the repose of the souls of those who lost their lives in this attack, and for the comfort of all who mourn for them,” the cardinal said in a June 6 statement.

He added that New York Catholics’ prayers “are all the more fervent” as they recall that Bishop Jude Arogundade of Ondo was “a beloved pastor here in the Archdiocese of New York” before he returned home to Nigeria to serve as bishop.

Cardinal Dolan called “on the world community, including the United States, to take notice of this rising tide of anti-Catholic and anti-Christian attacks taking place in Nigeria, and work to restore protection for the fundamental right of religious liberty wherever and whenever it is threatened.”

Father Roger Landry, national chaplain for Aid to the Church in Need/USA, noted that the vestments a priest wears to celebrate Mass on Pentecost are “red, signifying the fire of the Holy Spirit.”

“Little did the Catholics at St. Francis Xavier in Owo, on the feast celebrating the church’s birthday, know that their garments would similarly be drenched red in blood,” he said in a statement.

But “our beloved brothers and sisters in the faith, including the little children, have not died in vain,” the priest added. “Their blood will fertilize the soil of the faith in Nigeria and their martyrdom has already inspired and emboldened believers around the world.”