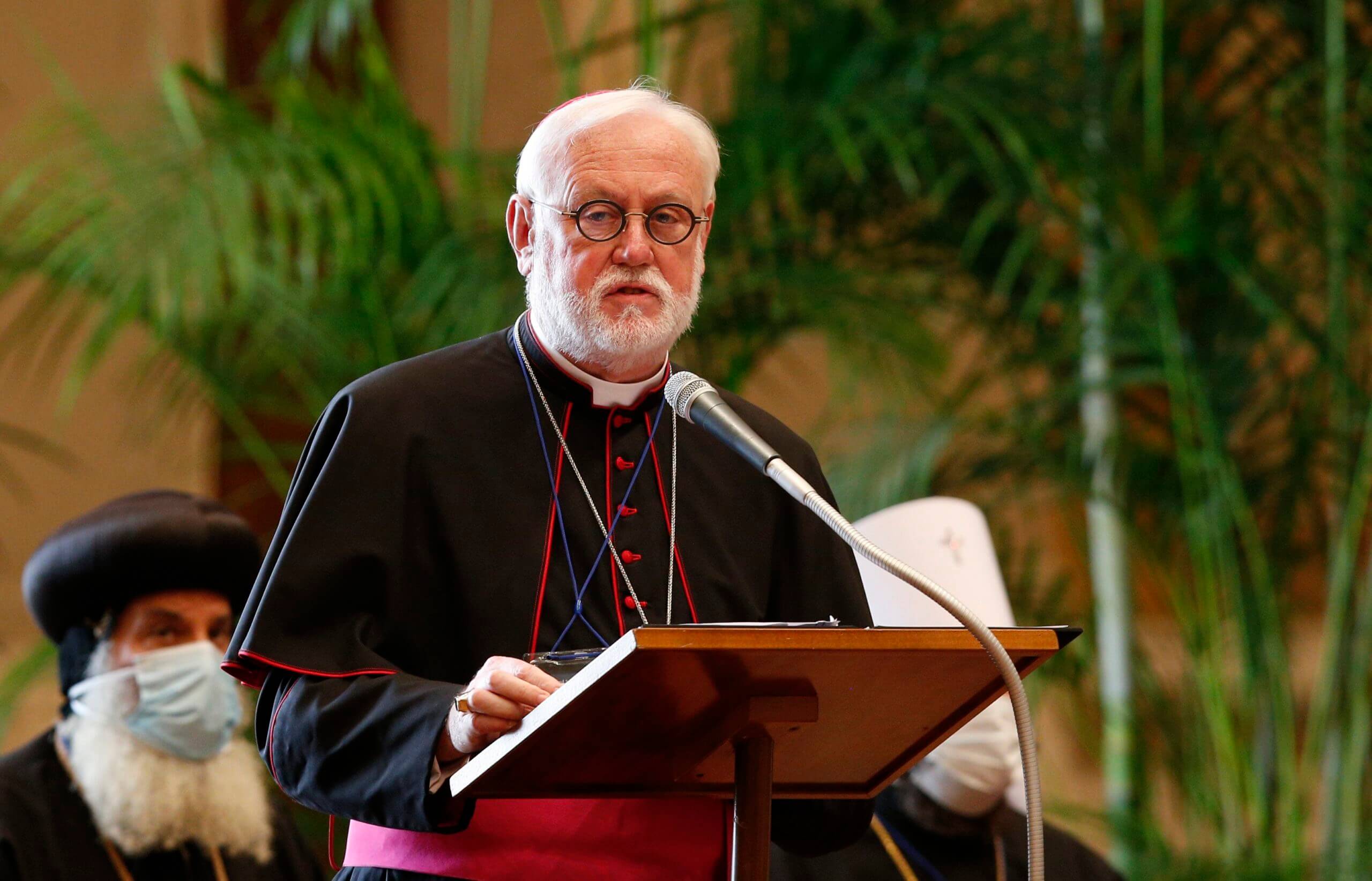 Photo Credit: CNS/Paul Haring - Archbishop Paul Gallagher, Vatican secretary for relations with states, speaks at the meeting, "Faith and Science: Towards COP26," with Pope Francis and other religious leaders in the Hall of Benedictions at the Vatican Oct. 4. The following day, Archbishop Gallagher told a U.N. trade and development conference that worsening economic inequality requires fiscal policies aimed at wealth redistribution and progressive income taxes.

The increasing and extreme economic inequality in the world is rooted in an ideology of individualism in which investments and prosperity are aimed only at driving profit not helping the common good, said Archbishop Paul Gallagher, Vatican foreign minister.

“As wages have decreased, millions of individuals have been plunged into poverty, and this has set back poverty reduction targets by nearly a decade. The fault lines of the global economy, in fact, have been dramatically exposed,” he said Oct. 5, addressing a high-level U.N. meeting held online and hosted by the Caribbean island of Barbados.

In his address, Archbishop Gallagher said that “the extreme inequality that has emerged in recent decades is underpinned by an individualistic ideology that has abandoned the notion of the common good in a common home with common horizons.”

“Investment and prosperity have been delinked from notions of a social contract and a commitment to a caring society; rather, today they are perceived merely from the perspective of sources of profit,” he said.

“A new ethics of the common good” is needed to guide policymaking so measures will be “capable of both tackling the structural inequalities behind our deeply divided and increasingly fragile world and unleashing the spirit of human ingenuity and creativity, which is urgently needed to build back better from the devastation of the COVID-19 pandemic,” he said.

More specifically, he said, there need to be new policies and changes in regulations in a number of areas.

“First, fighting rampant inequality cannot be achieved without fiscal redistribution and increasing the progressiveness of income taxation schedules,” he said, referring to fiscal and monetary policies that would redistribute income or benefits and to increasing tax rates as one’s taxable income increases.

There needs to be “adequate enforcement of corporate taxation, especially multinational enterprises,” he said, since “better taxation can redistribute a portion of the rents accruing to big corporations and help build up tax bases, especially in developing countries.”

Structural problems also need to be fixed, such as “the persistent productivity gap between small and medium enterprises and large firms, which is an important driver of the observed rise in inequality, including wage inequality,” the archbishop said.

Inequalities in health care and access to medications and vaccines may lead to “significant repercussions in the future and dangerous risks for systemic resilience,” he said.

The archbishop also called for a waiver on World Trade Organization intellectual property rules so all countries could have “adequate and rapid access to vaccines, diagnostics and treatments,” especially for COVID-19.

“It is now time to recover the notion of interdependence and to rebuild multilateralism around the ideals of social justice and mutual responsibility among and within nations,” Archbishop Gallagher said.

“Only in this way can we hope to calibrate the global economy toward a 21st-century vision of stability, shared prosperity and environmental sustainability, and ensure a resilient and prosperous future for all,” he said.