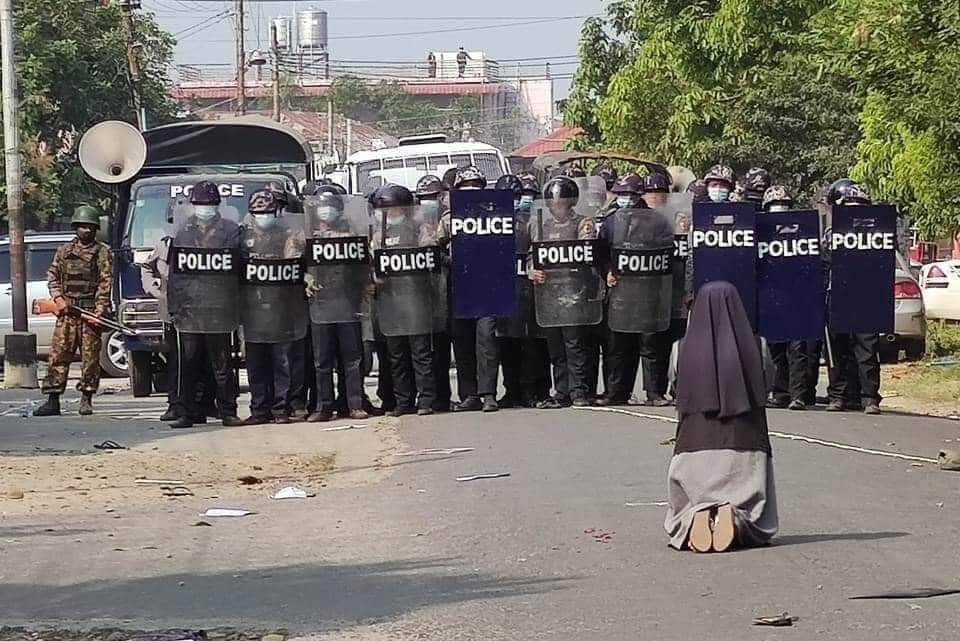 Photo Credit: CNS/courtesy Myitkyina News Journal - Sister Ann Rose Nu Tawng, a member of the Sisters of St. Francis Xavier, kneels in front of police and soldiers during an anti-coup protest in Myitkyina, Myanmar, Feb. 28, 2021. Sister Tawng, who became a symbol of Myanmar's nationwide protests, has been named by the BBC as among the 100 most influential and inspiring women of the year.

Among the Nobel laureates, politicians and professors honored by the BBC as among the 100 most influential and inspiring women of the year is a Catholic nun from rural Myanmar.

The photo of Sister Ann Rose Nu Tawng on the BBC website shows the nun wearing the simple white habit and veil of the Sisters of St. Francis Xavier. She looks proudly into the camera, her lips pursed in a half smile.

But a different photo drew worldwide attention and became a symbol of Myanmar’s virulent nationwide protests against a Feb. 1 military takeover when Sister Tawng knelt in front of armed security forces in Myitkyina, the capital of Kachin, Myanmar’s northernmost state, to halt their pursuit of fleeing demonstrators.

The photos and video of the 45-year-old nun on her knees with her arms spread wide, pleading with police, went viral in March. She reportedly told security forces that day: “You’ll have to come through me. Shoot me instead of these young people.”

The BBC’s description of reads: “Sister Ann Rose Nu Tawng has openly spoken of protecting civilians, especially children. She has trained as a midwife and has led a life of service for the past 20 years, recently looking after COVID-19 patients in Myanmar’s Kachin state.”

People in Myanmar praised the nun, including on Facebook.

“What she did is a deed which can be done by the people who have a big heart. These kind of people are rare,” a Facebook user named Jewel said. Many Facebook users in Myanmar, a majority Buddhist country, commented “Respect.”

The BBC, a publicly financed broadcasting network in Britain, names 100 influential and inspirational women around the world every year. This year, half of the women on the list were from Afghanistan.