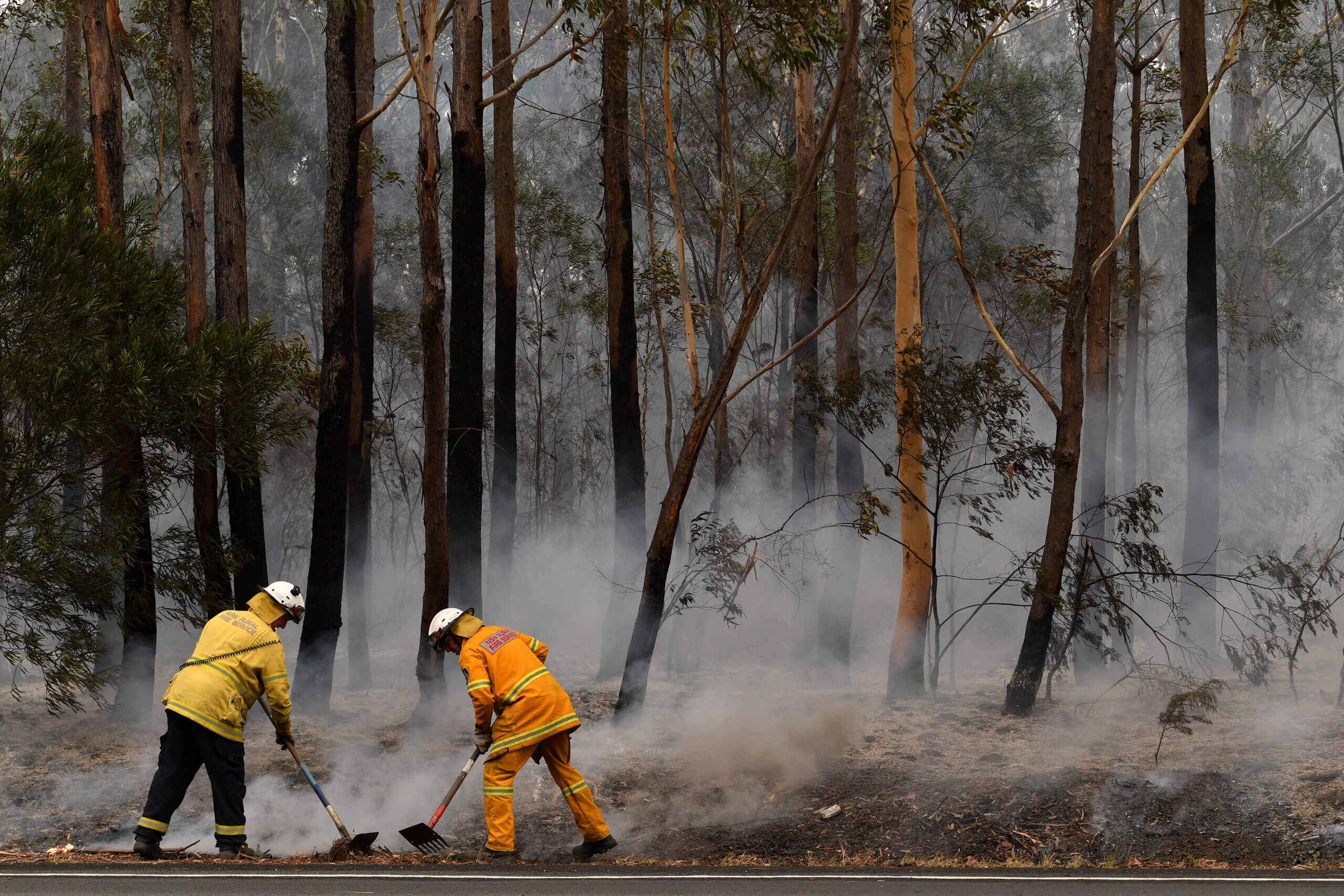 Photo Credit: CNS/Dean Lewins, AAP via Reuters - Firefighters contain a bushfire along a highway near Ulladulla, Australia, Jan. 5. Soaring temperatures, often higher than 100 degrees Fahrenheit, and a protracted drought have contributed to an unprecedented national emergency which, by Christmas, had already seen more than 14.5 million acres of forest and rural land burned.

As some of the worst wildfires in Australian history rage across four states, thousands of people in affected areas in New South Wales and Victoria continue to be evacuated to safety.

Soaring temperatures, often higher than 100 degrees Fahrenheit, and a protracted drought have contributed to an unprecedented national emergency which, by Christmas, had already seen more than 14.5 million acres of forest and rural land burned.

Amid conditions regularly described as catastrophic, fires have continued to rage in hundreds of locations in Western Australia, New South Wales, South Australia and Victoria states for months.

Marie Burton, a parishioner of Our Lady of Sorrows Church, in the New South Wales Diocese of Wagga, lives on a farm in Jingellic, near the border with Victoria. In late December and early January, Jingellic was surrounded by fire twice.

“We know so many Catholic people who are being affected. There’s a lot of suffering going on, and we’re continuing to pray,” Burton said in tears.

“Twice our home was saved. On Monday evening — and again on Tuesday.

“The fire came up over the hill but there was no stopping it. My husband was getting things out of the house, but he was told to just get out of there.

“We didn’t know for 24 hours (what happened) but luckily, it was saved.”

Burton has taken shelter with her sister’s family, the Darlows, including nephew Matthew Darlow, a member of the local brigade of the Rural Fire Service. The Darlows live at Lankeys Creek, approximately 12 miles north of Jingellic. While staying with her relatives, Burton has been cooking at a shelter to feed firefighters.

“We just need to band together, get the fires out and support those who have lost their homes and livelihoods,” said Darlow.

“We’re waiting on a change in wind that could affect things, and an increase in temperature, tonight or tomorrow,” said Darlow, who asked Catholics throughout the world to pray for Australia.

Bishop Shane Mackinlay of Diocese of Sandhurst expressed concern about “the impact that fires have already had on communities and by the anxiety that the threat of fire is causing.”

In a statement Jan. 3, he urged “political and community leaders to continue efforts to identify and respond to the underlying causes that have contributed to the heightened risks we are facing this summer, (and) we pray for those who lost their lives, and for the safe recovery of people who are missing.”

The fires have been burning since August and have destroyed an area comparable to the combined region of the Netherlands and Belgium.

By Jan. 3, thousands of people were given less than 48 hours to evacuate fire-ravaged coastal communities in New South Wales. With the heat forecast for 111 degrees Fahrenheit Jan. 4, the fires were expected to worsen.

More than 2,500 buildings have been razed and at least 20 people — 16 from New South Wales, two from Victoria and two from South Australia — have died. Officials fear the toll could rise steeply, with Victorian emergency services saying 28 people are missing in the state.

Smoke clouds, which can be seen from space, have reached New Zealand, nearly 2,500 miles away across the Tasman Sea.

The Gippsland region in Victoria’s east has seen convoys of people escorted by police and emergency services personnel evacuating from towns such as Corryong and Walwa in Victoria’s Alpine country.

Catholics such as the Burtons and Darlows say their faith is strong.

“We have a very deep faith,” said Burton. “I put a scapular on the door and sprinkled the house with holy water, and we have statues in our home, including the Infant of Prague, and so I prayed — we prayed very hard, and asked other people to pray.

“All of these people are amazing people, with an amazing Catholic faith, and we know God will protect them,” she said. “Every time we hear good news, we’re overjoyed that these people haven’t lost their homes. There is just miracle after miracle happening.”

In his statement, Bishop Mackinlay applauded the heroism of firefighters — mainly volunteers — risking their lives for their country and community

In Jingellic, a young volunteer firefighter, Sam McPaul, died Dec. 30 after a freak tornado caused by the fires flipped his 11-ton truck. His wife Megan, whom he married in May, is expecting their first child.

Similar stories can be heard across the country. In Sydney, the Mass for Sydney firefighter Andrew O’Dwyer was due to be held in the Horsley Park Parish Jan. 7.

O’Dwyer, 36, and fellow firefighter Geoffrey Keaton, 32, were killed Dec. 19 when a fallen tree caused their tanker to roll as they fought fires south of Sydney.

The Order of Malta Australia announced Jan. 3 it would use money from its Natural Disaster Fund to provide emergency relief to those directly impacted.

“We are exploring opportunities with our regional Hospitallers to provide some direct assistance, with our top priority currently to provide support to the thousands who have lost homes or are stranded,” said a statement from the order.