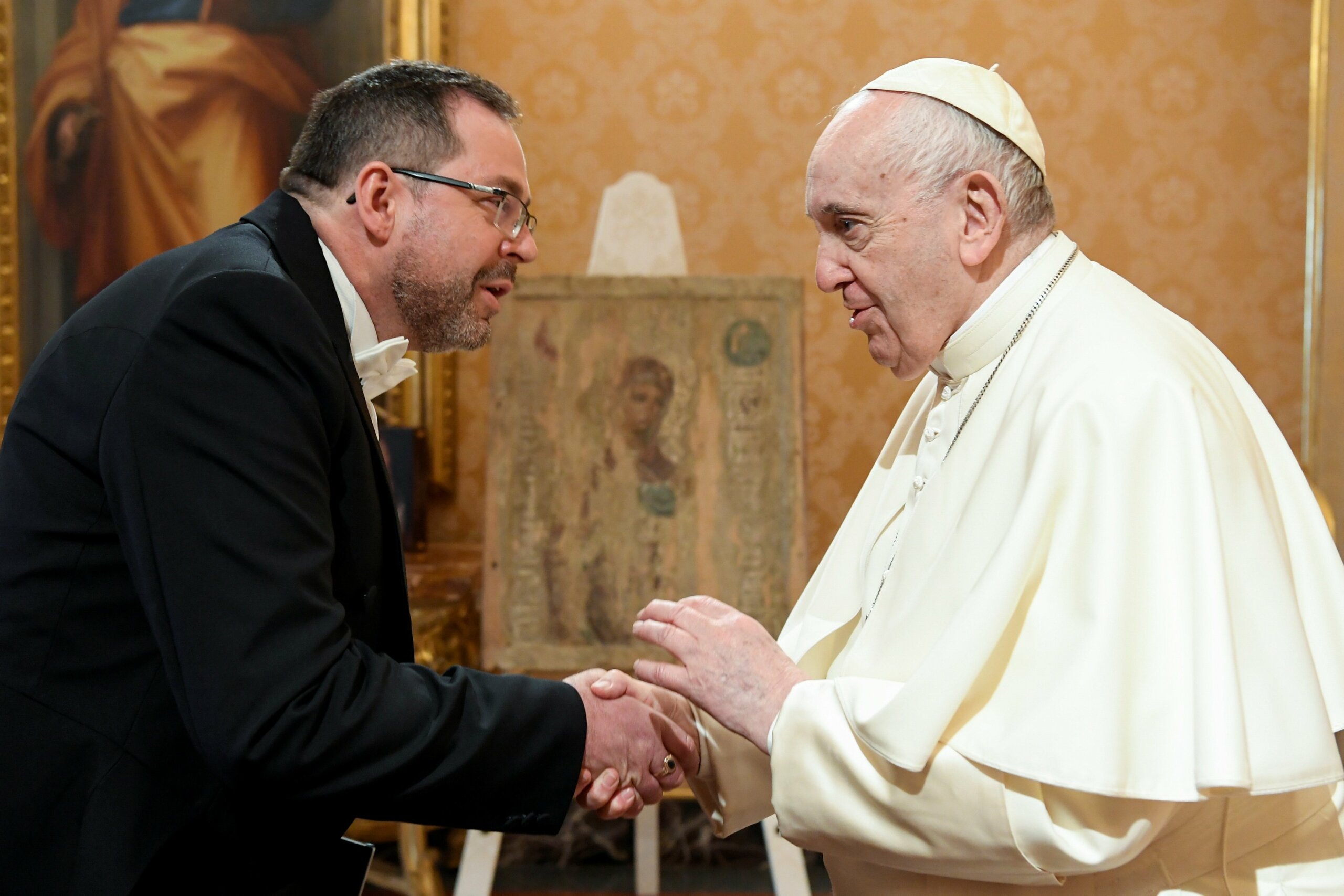 Photo Credit: CNS/Vatican Media via Reuters - Pope Francis shakes hand with Ukraine's ambassador to the Holy See, Andrii Yurash, during a private audience at the Vatican April 7, 2022. After meeting with Pope Francis Aug. 6, Yurash said the pope planned on visiting the war-torn country before his visit to Kazakhstan in September.

Pope Francis plans to make his long-awaited visit to Ukraine before his trip to Kazakhstan in September, said Andrii Yurash, Ukraine’s ambassador to the Holy See.

In a series of tweets posted Aug. 6 after meeting with the pope, Yurash said the people of Ukraine “have been waiting for the pope” since the start of the war and will “be happy to greet him before his trip to Kazakhstan.”

“I am very close to Ukraine and want to express this closeness (through) my visit to Ukraine,” the pope said, according to the Ukrainian ambassador.

“Moments of communication with (the) Holy Father are always inspirational,” he said in a follow-up tweet. “Especially when there is a chance to discuss and promote subjects that are ‘on the table’ for a long time, like the pope’s visit to Ukraine.”

The pope expressed on several occasions his desire to not only visit Ukraine, but also Russia to plead for an end to the conflict.

In an interview with Catholic News Service July 18, Yurash said that while Ukraine was ready for a papal visit, he doubted the pope would be able to to visit Moscow.

Russian President Vladimir Putin “perfectly understands” what the pope’s main message should be, the ambassador said.

“It will be demanding; it will be very concrete, emphasizing that Russia is responsible for the war and has to do everything to stop the war. (Putin) will not be willing to answer positively. So, in this case, negotiations would not be successful for either side,” he told CNS.

Yurash said the war has strained relations between the Catholic Church and the Russian Orthodox Church, which he said is more aligned with the “interests of the Russian state.”

Nevertheless, in an interview that aired in the United States July 11 on Univision, the Spanish-language network, Pope Francis confirmed that he will meet with Russian Orthodox Patriarch Kirill during his Sept. 13-15 visit to Kazakhstan.

Both the pope and the Russian patriarch will participate at the Congress of World and Traditional Religions in the capital city, Nur-Sultan.