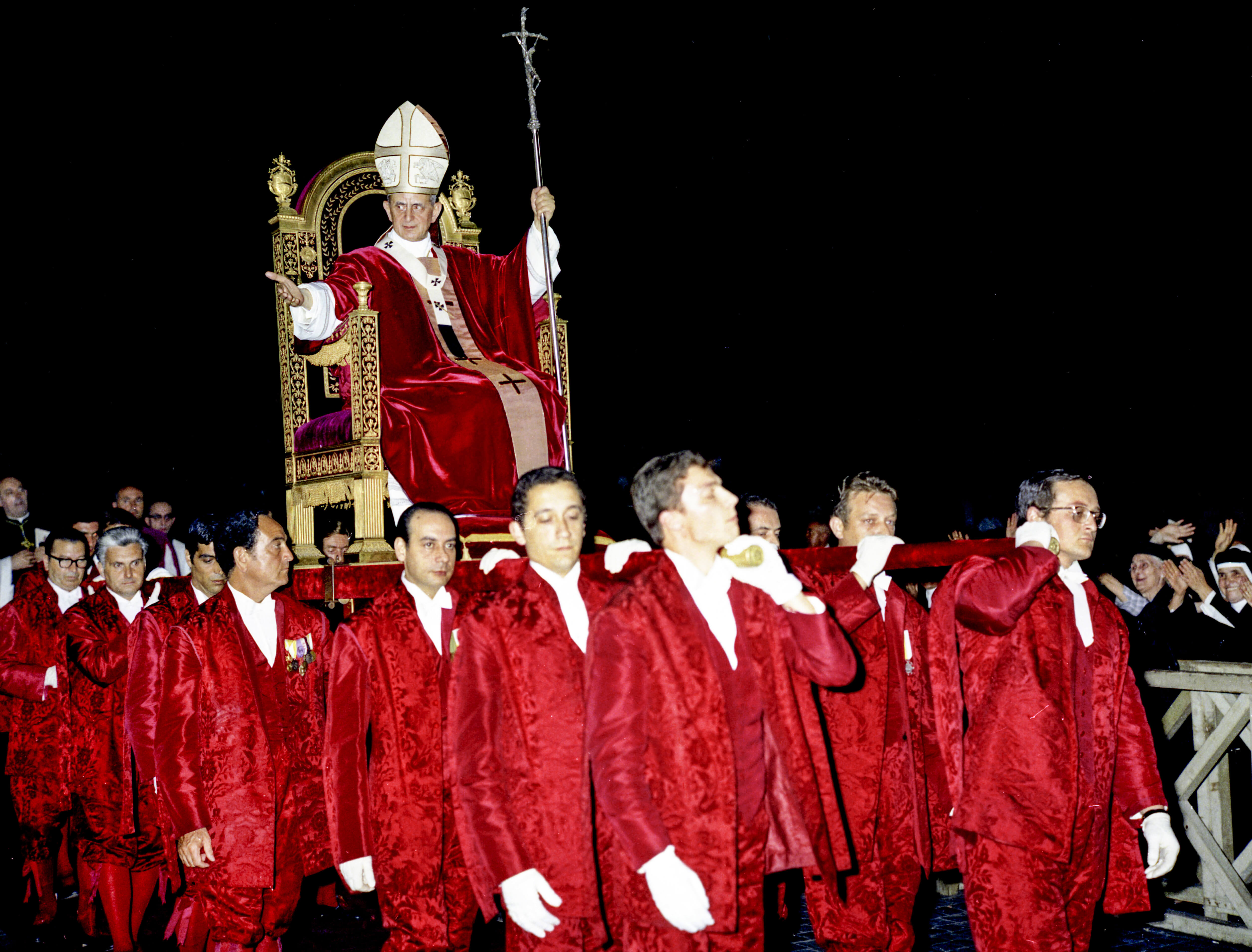 Photo Credit: CNS photo/Giancarlo Giuliani, Catholic Press Photo - Pope Paul VI is carried in procession on the "sedia gestatoria," a ceremonial throne, in this undated photo. Pope Paul, who served as pope from 1963-1978, was declared blessed by Pope Francis Oct. 19. He is most remembered for his 1968 encyclical, "Humanae Vitae," which affirmed the church's teaching against artificial contraception.

The 50th anniversary of ‘Humanae Vitae’ is an occasion to celebrate the gift of Blessed Paul VI’s teaching and an opportunity to renew our commitment to sharing this liberating truth with a world that is increasingly confused about sexuality,” Denver Archbishop Samuel J. Aquila wrote in his new pastoral, “The Splendor of Love.”

He wrote the pastoral “to affirm the great beauty of the Church’s consistent teaching through the centuries on married love, a love that is so desperately needed today.”

“Humanae Vitae” (“Of Human Life’’) reaffirmed the Church’s teaching against the use of artificial birth control and contraceptive sterilization.

“He prophetically defended the integrity of married love and warned us against the danger of reducing sexuality to a source of pleasure alone,” Archbishop Aquila wrote.

“Married love reflects the love of Christ, the love which caused Him to become human to save us and to give His life for His Church. Married love, ‘from the beginning’ is also by nature fruitful, bringing new life into the world so we can participate in the gift of God’s own creation.”

Defending this love in today’s culture “requires a strong commitment,” the archbishop said. “The family is the foundation of society, and when it is undermined, society itself is threatened with collapse,” he added.

Archbishop Aquila said that the 50 years since “Humanae Vitae” have brought “both goodness and the distortions of the truth about sexuality.”

human being,” he wrote.

Among positive developments, he listed St. John Paul’s theology of the body; Pope Benedict XVI’s writings that show “the astonishing truth” that “human love and sexuality teach us about God’s own love;” and Pope Francis’ emphasis on fostering “a culture of encounter within the family so the deeply social character of marriage is supported and spreads to society at large.”

In addition, the archbishop said, there have been “great advancements” in natural family planning “as couples have embraced God’s beautiful and sometimes challenging plan for their married life.”

He listed several “disturbing” negative developments of the past 50 years resulting from “widespread contraceptive use.” The pope, he noted, had warned contraception would “open wide the way for conjugal infidelity and a general lowering of moral standards.” “The effects of the sexual revolution have devastated our culture,” Archbishop Aquila said, noting the large numbers of abortion, the rise in sexually transmitted diseases, the nearly 50 percent divorce rate, the fall of birthrates and a decline in the number of people getting married. He noted how the “predominant use” use of the birth control pill is flooding water supplies with synthetic estrogen and “endocrine disrupting” chemicals, leading to, among other things, infertility and an increased risk of cancer. It’s commonplace now for children to be born out of wedlock, Archbishop Aquila continued, and “the greatest tragedy today facing the family may be the unwillingness of many to enter married love and to experience the joys of family life,” he said. “Humanae Vitae,” Archbishop Aquila said, explains “the truth about married love” and lists its “four essential qualities: It needs to be fully human, total, faithful and fruitful.” He acknowledged that “the 1968 reception of ‘Humanae Vitae’ was mixed,” but he said “the fulfillment, of Blessed Paul’s prophetic wisdom is undeniable.” Archbishop Aquila said every Catholic has a mission “to live and share the good news of God’s plan for human sexuality,” including parents, married couples, priests and deacons, doctors and nurses, lawyers and politicians, journalists, artists and everyone in the media, and teachers, catechists and youth leaders.