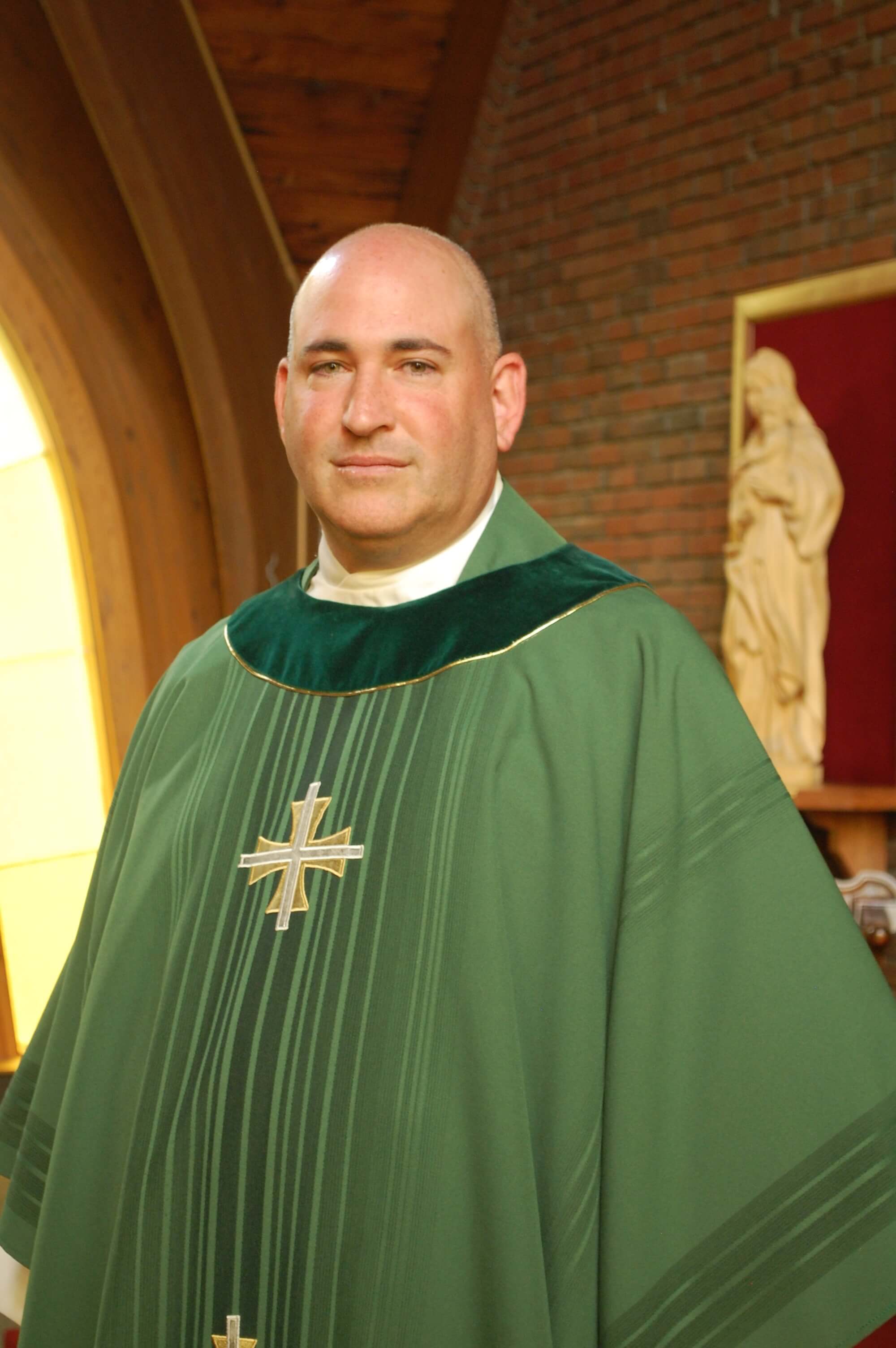 Photo Credit: Vermont Catholic/Cori Fugere Urban - From the university to the slopes to the links, Father Dwight Baker is witnessing his faith.

Father Dwight Baker knows evangelization can be done just about anywhere, even on a golf course, in a restaurant or on a ski lift.

Take for example, the day he was skiing alone at Sugarbush Resort in Warren. A woman got onto the lift with him, and they struck up a conversation. He told her he was a Catholic priest, and she revealed that she was divorced — but not remarried — and she thought the divorce had caused her to be excommunicated. He counseled her and let her know divorce alone is not cause for her to be away from the Church.

Not long after, the woman wrote to him and said she had decided to go back to church.

“We have the opportunity to witness our faith in ordinary activities,” said Father Baker, now the executive director of the Catholic Center at the University of Vermont in Burlington.

He meets many people who tell him they “used to be Catholic,” and he listens to their story, asks questions and shares his faith.

“I try to meet people where they are at,” he said.

Once after playing golf in South Burlington with a senior priest of the Diocese of Burlington, they were having dinner at the clubhouse restaurant — not dressed in clerical clothing — and people who knew the senior priest gathered around in what was akin to a fireside chat. They talked about faith, and some of the golfers revealed they had fallen away from their Catholic faith. They engaged in a discussion; the priests listened and advised.

“We have all these opportunities, but sometimes people don’t respond because they are afraid of what the reaction will be,” Father Baker said.

That’s why it is important for priests to build relationships with people, and, as Father Baker encourages, for parishioners to know and engage with one another.

He told a story about a man who wore a hat into church. After someone told him to take if off, he left it on, and three others approached him with the same admonition. Finally someone asked him why he did not take the hat off, and he replied, “This is the first time anyone has spoken to me in [the] four weeks” he had come to the church.

“For someone to have a positive experience with clergy has tremendous value,” said Father Baker, who hopes to be a minister of mercy and takes seriously the idea of servant leadership.

A native of Newport Center, Father Baker, 40, earned a bachelor’s degree in philosophy from Franciscan University of Steubenville in Ohio then entered Mount St. Mary Seminary in Emmistburg, Maryland, to study for the priesthood for the Diocese of Burlington. After his first and second theology years, he left, not expecting that after five years he would be back in the seminary, this time at St. John’s in Brighton, Massachusetts.

During that hiatus, he worked as a youth minister in the Atlanta area. While visiting Our Lady of the Holy Spirit Monastery in Conyers, Georgia, he was overwhelmed with the feeling that God wanted him to be a priest, and he began so sing the “Salve Regina” aloud.

For the first time, he said, he wanted to be a priest and didn’t feel the pressure he had felt earlier.

He was ordained at St. Joseph Co-Cathedral in Burlington in 2009.

Not only does he seek to share is faith now with the students at the University of Vermont, he wants to empower them to share their faith with others.

This year the staff is accompanying students as they witness their faith on campus and showing them how to evangelize in the dining hall, at sports events and at the gym. “This can be done by being present and sharing faith in an authentic and natural way and getting to know people first,” Father Baker said. Students can tell others about the Catholic Center or invite them to an event.

“What is on the heart of the students is service,” Father Baker said. “That’s big. That’s a big part of evangelization.”

Among the service works the Catholic Center students do is prepare and serve a Salvation Army meal twice a month.

Father Baker hopes there will be “no stranger at the Eucharistic table,” meaning that everyone at Mass should have first encountered someone in the worshipping community who makes him or her feel welcome.

It’s one opportunity for members of the faith community to witness their faith in an ordinary activity, just like Father Baker witnessing his faith on a ski lift.