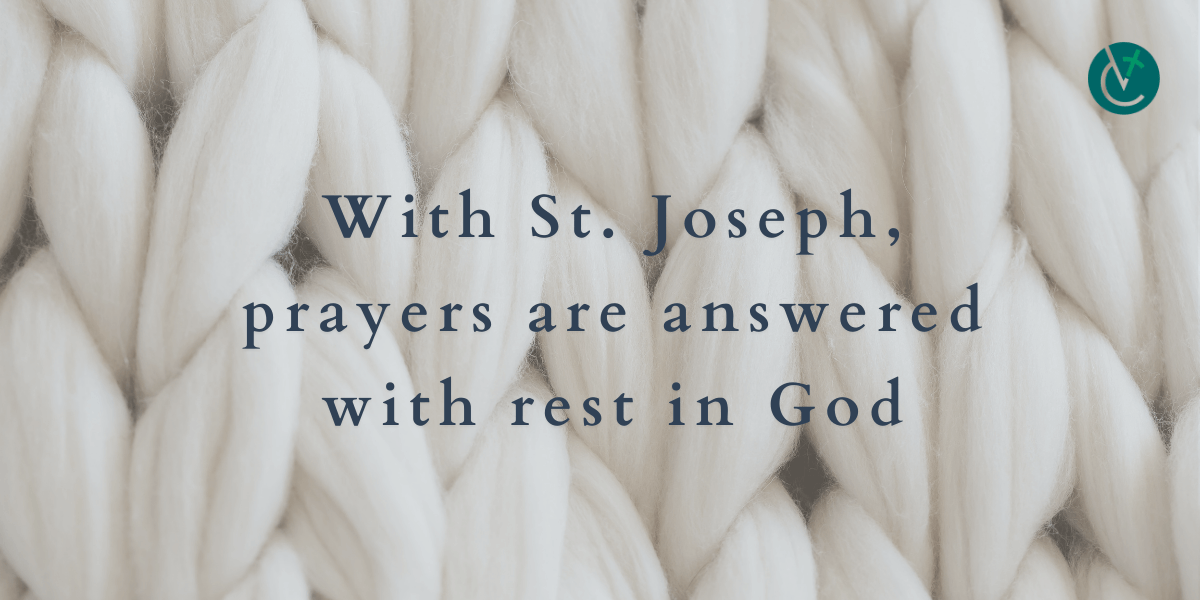 With St. Joseph, prayers are answered with rest in God

Like many of those who have a particular devotion to St. Joseph, Pope Francis keeps a statue of the saint in his study. What may not be familiar to some, however, is the image the Holy Father has chosen— St. Joseph sleeping.

In his 2015 audience with Philippine families, Pope Francis shared, “I have great love for St. Joseph because he is a man of silence and strength. On my table I have an image of St. Joseph sleeping. Even when he is asleep, he is taking care of the Church!”

It was in dreams that God spoke to St. Joseph while he slept, telling him to take Mary as his wife, then advising him to flee to Egypt to escape Herod, and, later, telling him when it was time to return to Nazareth.

Pope Francis noted: “When I have a problem, a difficulty, I write a little note and I put it underneath St.  Joseph, so that he can dream about it! In other words, I tell him: Pray for this problem!”

The Holy Father is not alone in his devotion.

“It is difficult to list all the things St. Joseph has done for those in my family,” said Father Christopher Micale, pastor of St. Thomas Parish in Underhill Center. “My mother, a widow, is often assisted with small problems related to mechanical things. She has a statute of St. Joseph in her home.”

Father Micale stressed, “St. Joseph, the quiet man, works behind the scenes in small but significant ways. It speaks to his humility and attitude of service to get the job done rather than call attention to himself.”

Father Micale recalled the time when his mother’s vehicle had a flat tire. “Not being familiar with changing a tire, she was about to purchase a new tire and would have to travel with the AAA technician,” he said. “After a quick prayer to St. Joseph, her neighbor rushed out and told her to look in the trunk for a spare which was, indeed, found. She avoided the inconvenience of having her car towed to the mechanic, giving me time to come and assist her. It might sound like a small matter, but to my mom it was a great blessing attributed to St. Joseph to whom she cried out for help.”

For Italians, and Sicilians in particular, St. Joseph is “the go-to saint” for a host of matters from selling one’s house to safety to providing for basic needs, said Father Micale.

The tradition of burying a statue of St. Joseph to ensure a house sale has its beginnings in a story from the 1600s when a group of cloistered nuns buried medals of St. Joseph and offered prayers to expand their property. Over time, the practice changed to burying statues.

“Carolyn” is one of those who turned to St. Joseph for help in selling her home, burying a small statue of him in her front yard and praying for the saint’s intercession. Since the experience, she recommends following directions and burying the saint facing the house that needs to be sold. She explained that interest in the house was slow even with St. Joseph’s help, but, remarkably, her neighbor’s house across the street sold right away.

Carolyn decided to dig up St. Joseph and found she had buried him facing her neighbor’s house. After a good laugh, she reburied the statue facing her own house and, shortly thereafter, was putting up a sold sign.

For “Mara,” prayers to St. Joseph were for her son, who struggled with addiction problems since high school. Drug use and the many related problems eventually resulted in several stints in jail, the loss of his marriage, his job and a waning belief that he was strong enough to overcome his addiction. Without that faith in himself, Mara knew they might lose him.

Mara shared that, while in jail, he was working in the laundry when a pamphlet fell from the dryer he was loading. The pamphlet was about having faith in God. He took it back to his cell with him and began attending faith-sharing sessions in the jail. He asked for a priest to visit and began reading Scripture.

The journey once out of jail was not an easy one, but from that day on he stopped using the drugs that brought him to such a bad place. He’s been clean for three years has begun a small construction company and now has a son of his own.

Mara still prays every day for her son and grandson because she knows that strength, wisdom and faith will be needed on their journey, and there is no one better to help with that than St. Joseph, she said.

So, like Pope Francis, she puts her prayer petitions under her St. Joseph statue and prays that, like St. Joseph, her son will continue to overcome life’s challenges because he has learned to rest in God.

— Originally published in the Spring 2021 issue of Vermont Catholic magazine.