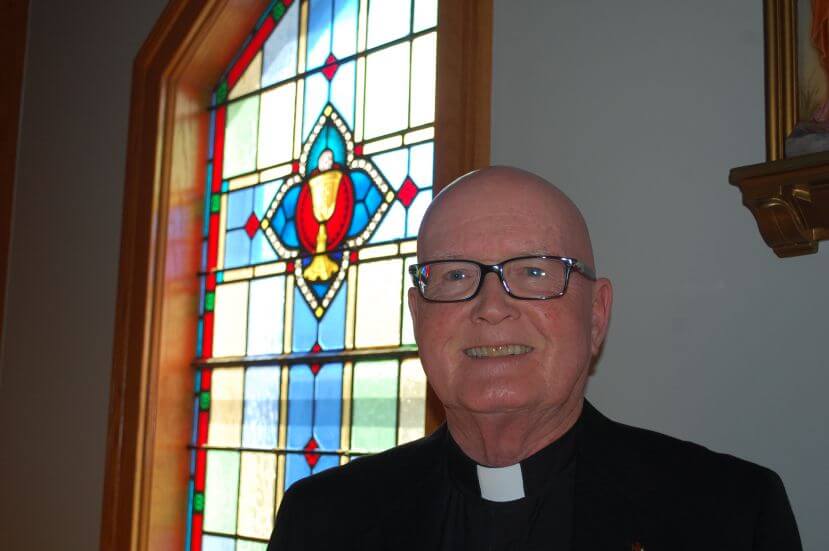 As a priest, Father David Cray for years did not live and minister in the New England culture into which he was born and in which he lived before entering the Society of St. Edmund during college.

He lived mostly in Canada, Europe and the American South until he came to Vermont to serve as pastor of St. Jude Church in Hinesburg and Our Lady of Mount Carmel Church in Charlotte in 2003.

“The benefit of living in more than one culture is you realize there are very few absolutes apart from God,” he said.

Born into an Irish Catholic family in the Jamaica Plain section of Boston in 1945, he is the youngest of the three children of John F. Cray, a high school Latin teacher, and Alice M. Kernan Cray, who worked in the Boston Public Library.

Because he lived a distance from his parish and parish school, he attended public school but got to know many of his religious neighbors, skating in the park with Maryknoll Brothers or building a tree house on their property, for example.

Sometimes he and his friends would be playing outside when one would suggest going into the Maryknoll chapel to pray the Stations of the Cross. “The religious aspect was part of our lives,” he said.

He graduated from Boston Latin School in 1963 and enrolled at St. Michael’s College in Colchester; his family had ties to Bellows Falls, and he liked the idea of studying in Vermont at a Catholic college where he attended daily Mass.

He intended to become and English teacher, but during his sophomore year, his plans changed as he prepared for study in Europe during his junior year.

In the process of planning with the dean of students, Father Francis Gokey, the Edmundite priest asked him what he intended to do after college. When he replied, “teach,” Father Gokey asked him if he had ever thought of the similarity between teaching and preaching.

Young David Cray got the hint.

He told his friends what Father Gokey had said, and they agreed he’d make a good priest. “Father Gokey sparked and fostered my vocation,” he said.
David Cray entered the Edmundite novitiate and graduated from St. Michael’s in 1968 then studied theology at the University of St. Michael’s College in Toronto, earning a master of divinity degree in 1971.

Burlington Bishop John A. Marshall ordained him to the priesthood in 1972, and his first assignment was as parochial vicar of St. Edmund of Canterbury Parish in Whitton in southwest London, a parish staffed by the Society of St. Edmund.

Father Cray lived in Burlington where he served as director of scholastics for the society and later as secretary general, and he lived in Mystic, Conn., where he was the order’s director of novices.

He served parishes — some years two at once — in Quebec and was episcopal vicar for the English-speaking region in the Diocese of Saint-Jean–Longueuil where, for two years he was a pastor in Greenfield Park.

From Canada he was transferred to Selma, Ala., to serve as programs director of the Society of St. Edmund’s Southern Mission, and from there moved to New Orleans to be president of Bishop Perry Middle School.

He became accustomed to living as part of a minority population, and he earned a master of theology degree from Xavier University of Louisiana in New Orleans with a concentration in Black Pastoral Theology.

“I have benefitted tremendously from living in cultures that are not the culture I was brought up in,” Father Cray said. “I lived in cultures that would be foreign to me if I had not lived there and been integrated into them.”

“You can change the tone of the conversation in your circle of friends and family,” he suggested. “You don’t have to keep intensifying the atmosphere and feelings of alienation, of division, of hatred.  If you do, it just gets worse.”

Emphasizing that all persons are children of God, Father Cray said, “God has given us all one single origin and calls us all to be one single human family.”

Living in different cultures has broadened his perspective and enriched his life. “Division and violence come out of not knowing. When you do not know, have no awareness of or acquaintance with people who are completely different from you, you fear them. When you get to know people and appreciate people, you come to love them, and you don’t fear them.”

A member of the Society of St. Edmund, which is celebrating its 175th anniversary, Father Cray said he has served in various places and cultures because of his vow of obedience. “It is important to discern God’s will and be obedient to it,” he said.