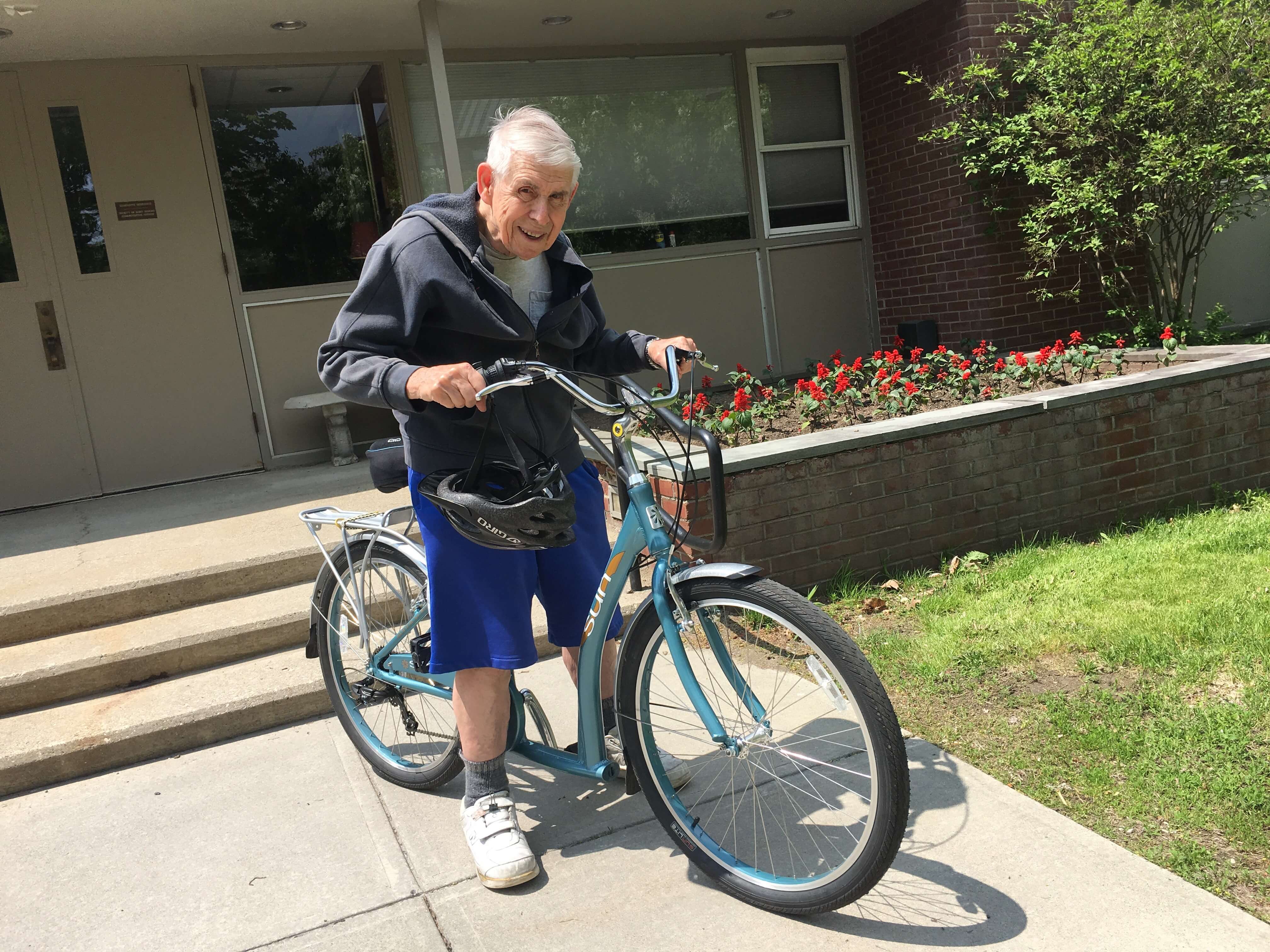 Photo Credit: CNS/Lynn Monty, Society of St. Edmund - Retired Edmundite Father Paul Couture, 90, pictured in a June 3 photo, still bikes five miles around St. Michael's College campus and nearby Fort Ethan Allen in Colchester a couple times a week. He attributes his longevity, mobility and memory to staying active. "It's not just about muscles, but our brain’s benefit from regular exercise," he said.

An evergreen tree outside of Nicole Hall serves as a windsock for Edmundite Father Paul Couture. If the branches are swaying in the wind too vigorously, it is not the day to go for a bike ride.

Days filled with skiing, football, baseball, bowling, tennis, jogging and even hockey are gone now, but Father Couture, 90, still bikes five miles around the St. Michael’s College campus and nearby Fort Ethan Allen in Colchester a couple of times a week.

He attributes his longevity, mobility and memory to staying active. “It’s not just about muscles, but our brain’s benefit from regular exercise,” he said. “It helps with memory. There is some kind of movement everyone can do.”

Fellow Edmundite Father Stanley Deresienski said Father Couture is a true motivator. “He looks forward to each day, to physical exercise, to private and communal prayer and to study and learn. He is truly a remarkable mentor and friend.”

Father Couture is known for his scholarship in scriptural studies and was the founding director of the Summer Theology Program at St. Michael’s College, where he served as chairman of the theology department.

“The program was more than just an academic endeavor since it also created a community where faith and reason were celebrated in an intentional way,” Edmundite Father Brian Cummings said. “It was a wonderful program that benefited the Church in the United States and Canada.”

The program, which recently ended after a 50-year run, attracted students from throughout the nation and several other countries. Many internationally known scholars came to teach here.

Father David Cray, superior general of the Society of St. Edmund, said Father Couture “has great intellectual curiosity and is humble and grateful.” He has known Father Couture since his student days at St. Michael’s College in the 1960s.

In retirement, Father Couture has conducted well-attended biblical studies programs in parishes in the greater Burlington area, including St. John Vianney Parish in South Burlington where he led a Bible study for 16 years. Now he leads a group at Our Lady of Grace in Colchester.

Father Deresienski said his friend “shows by his words and actions the importance of prayer and good liturgy. He is a good example of living the vows of poverty, chastity and obedience.”

The culture and influences in which Father Couture grew up led him to a devout life. Religious organizations and communities, like the Society of St. Edmund, ran most of the schools and activities of daily living north and south of the U.S.-Canadian border in 1929, the year he was born. His family was Catholic and dozens of his first cousins straddled the border. Three became priests.

One major influence was Uncle Damase Couture, a Catholic priest who often visited Father Couture in Vermont by dogsled. He was a missionary to the original inhabitants of James Bay in Canada. Another influence was his Aunt Corinne Beaudoin, a nun who spent years on mission in China. Her religious name was “Soeur St. Olivier” and she was a member of the Missionnaires Notre Dame des Anges.

“It was a point of pride to have a vocation in the family,” Father Couture said.

It also was the humble respect and worship modeled by his parents that led to his own choice of entering into a life of Catholic ministry.

He remembers quiet times of deep reverence in his childhood home that went hand and hand with hard work. They recited the rosary together and when he was not in school, delivering newspapers by bicycle or milking cows, his mother, Laura (Beaudoin) Couture, had him memorizing catechisms in French to recite aloud. She was a teacher for a short time in a rural school.

His father, Flavien Couture, bought a dairy farm in Barre and worked in the granite industry to supplement farmer’s wages. He eventually started his own granite business.

Father Couture went to grade school in Northfield and then high school in Swanton, where the Society of St. Edmund had an apostolic school, also called a juniorate. He also attended St. Monica School in Barre for a short time.

He studied language and philosophy at St. Michael’s College before heading to Rome for four years at Pontifical Gregorian University, and then two years at Pontifical Biblical Institute in Rome. He became fluent in German, Greek and Hebrew in addition to English and French. He taught for a few years to obtain a final degree in biblical studies at both the Gregorian and the Biblical Institute. In all, he was in Rome for eight years.

Religious life is one way of living in a world of loving God and serving others, Father Couture said. “The Society of St. Edmund is small, but that has an advantage. We all know each other and can help each other,” he said.

As to why the number of Edmundite order now numbers 22, down from the multitude it was when he was a boy, he said: “I am a priest partly because there was a predisposition in our culture at the time. We are in different times now with strong secular influences in this culture. The atmosphere was different when I was a youngster.”