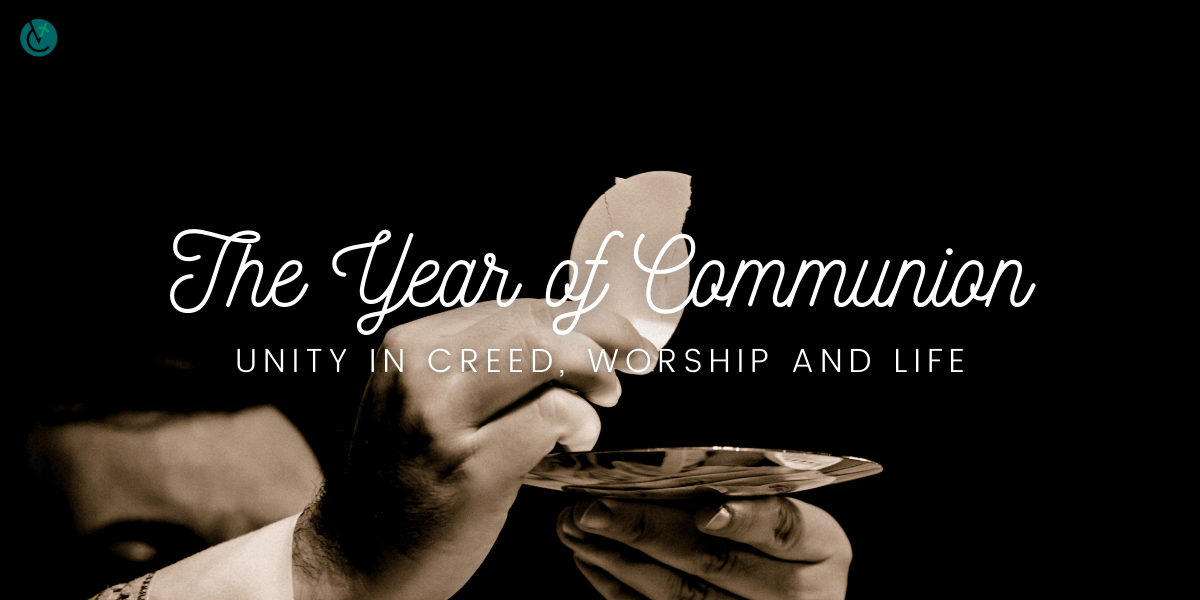 The Year of Communion: Creed, Worship and Life

For most of us in the Catholic community, the word “communion” almost automatically calls to mind the Communion that we receive at Mass — the Eucharist under the form of bread.  So, one could ask, “In calling for a Year of Communion in the Diocese, is the bishop going to have us focus on just this reality of Communion?”  Obviously as one can see by the way I’ve posed the question, the answer is “no” as there is so much more to the reality of Communion within our faith than just the simple Communion banquet.

“Creed: We believe …” First, there is the communion or “co-union” of those of us who share the light of faith together within the Catholic Church under one creed.  The Creed is a statement of belief which is professed individually and collectively.  This is what we believe, and our proclamation of it is an expression of communion with others who believe.  It is in this communion that I then live out my faith in worship and in life.  Indeed, when I come forward at Mass to receive the Holy Communion, I am not only saying that I believe in the Real Presence, but I am also saying that I am in communion with the Church, I believe as everyone else around me does. That is why within each eucharistic prayer after the words of institution we pray for the Holy Spirit that we “may become one body, one spirit in Christ.”  The celebration of the Eucharist is an action that seeks to both bring about communion and signify our communion with one another and with the Church.  This goes back to Jesus’ own prayer in John 17 at the Last Supper in which He prays that “they may be one.”  We celebrate communion with others of our faith, united in our adherence to The Creed and the Church’s dogma and doctrines, as then signified and made manifest in the Communion we share in the Eucharist.

“Worship: The Liturgy is the summit …”  Vatican Council II produced four major constitutions — declarative and infallible documents of the Church — one entitled The Constitution on the Sacred Liturgy. In the document, the liturgy, meaning the whole public worship of the Church in all its sacraments and rites, is proclaimed to be the “summit toward which the activity of the Church is directed.” Later magisterial teachings further annunciated that the celebration of the Eucharist is the sacrament that is the greatest, the summit among all the Church’s liturgies.  In its celebration, the Church as Communion enters into a communion with Jesus as the great high priest, with all of the saints in heaven in praise and worship to God.  Additionally, the Church in this earthly plane realizes in a fully real way, the presence of the resurrected and glorified Christ in the offering of the sacrifice of the Mass and in the sharing in the one bread and one body, Christ truly present under the appearance of bread and wine.  So, our worship at Mass is a celebration of our communion as Church, our communion with the heavenly host and our communal meal in which we experience a true and deep communion with Christ in our receiving Him as the Body and Blood of Christ.

“Life: The Eucharist is the font from which all her power flows … Having celebrated Communion in all of its many aspects in the Eucharist, we then leave the Mass, sent forth to live the goodness of life in the Church as bearers of the Good News of salvation. We are nourished and empowered to “go forth” to live in communion with each other as Catholics by the manner in which “we live and move and have our being” in the world.  In other words, the celebration of the Mass is to have an impact on our lives outside of the Mass.  St. Augustine of Hippo wrote regarding the experience of communion and the reception of Communion that “we should become what it is that we have received,” the Body of Christ.