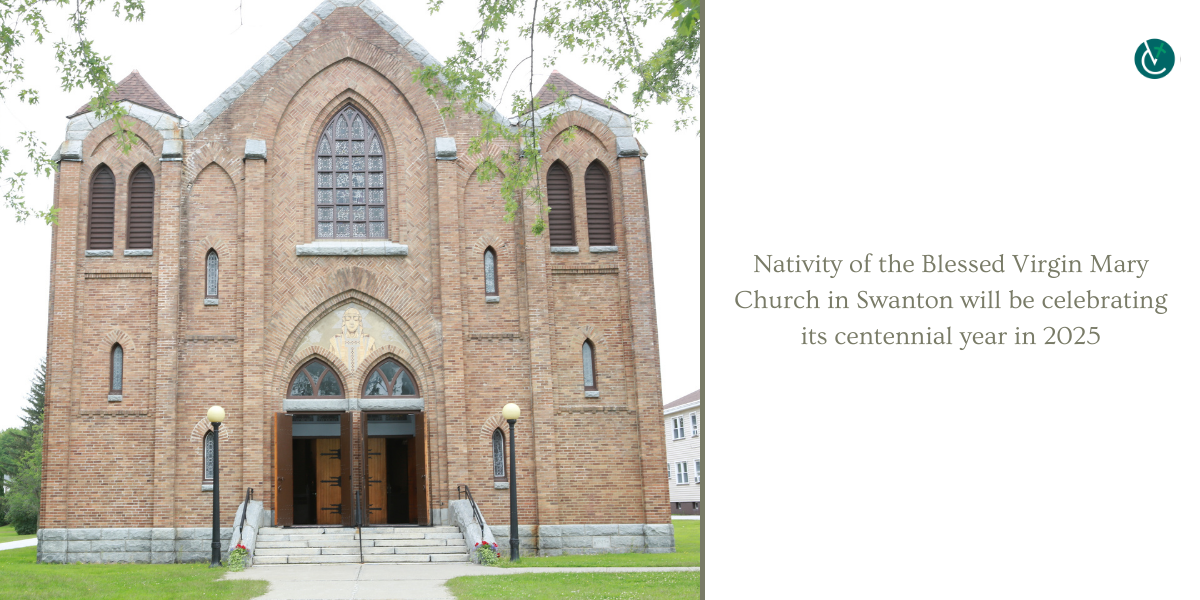 The ups and downs of a nonagenarian: A parish takes loving care of its ‘grande dame’

Nativity of the Blessed Virgin Mary Church in Swanton will be celebrating its centennial year in 2025. Partly in anticipation of this milestone, the parish — led by its pastor Father James Dodson — has undertaken two major projects to restore and improve the space. These two projects are currently in progress, and the parish already is enjoying some of the results.

The most noticeable project is the restoration of the church’s stained-glass windows, being done by All In Glass Studios Too in Glens Falls, New York. The windows in the sanctuary and the narthex window that sits above the choir loft have been restored. The two large windows located to the immediate left and right of the sanctuary — depicting the Sacred Heart and the Blessed Mother — are at the glass studio, and the window frames are filled with plywood. Father Dodson said that the next steps likely will be to do the remainder of the windows in subsequent stages, first one side of the church and then the other side.

The parish’s second major project is less glamorous, but equally significant — replacing the network of pipes in the cellar that supply hot water from the massive furnace to the radiators in the church. The first step, recently completed, was to remove the asbestos from around the pipes. Soon a contractor will remove the old pipes and install the new plumbing for the radiators.

Unexpectedly, in the midst of these two costly, time-consuming projects, the parish was thrown an additional restoration project. There is ample reason to be thankful, however, because the situation could have been devastating. All could have been lost, had Father Dodson not gone into the church to pray his breviary.

On June 15 at about 5 p.m., he headed into the church to pray his evening office. He entered the church from the sacristy, which is behind the sanctuary. Immediately he smelled smoke and heard the sound of flames. Then he saw the fire at the back end of the church, where there is a stand of votive candles beneath a framed image of the Blessed Mother. He quickly grabbed a fire extinguisher and put out the blaze, which was rapidly making its way up a wall of the church. He called the fire department, which promptly arrived and made sure the fire was out.

Another remarkable aspect of this nearly-tragic event is that, despite being in the center of the raging fire, the framed image of the Blessed Mother suffered no damage.

Father Dodson believes the fire was accidental; he does not think the fire was caused by the votive candles but by the wooden dowels that are used to light the candles. There is no investigation into the incident, he said, because there were no signs of foul play.

After the fire, Nativity of the Blessed Virgin Mary Church was closed for more than six weeks for smoke damage cleaning. The church reopened on July 30. The damage from the fire can still be seen — on the wall, wooden floor and carpet. Plans to make these repairs are underway.