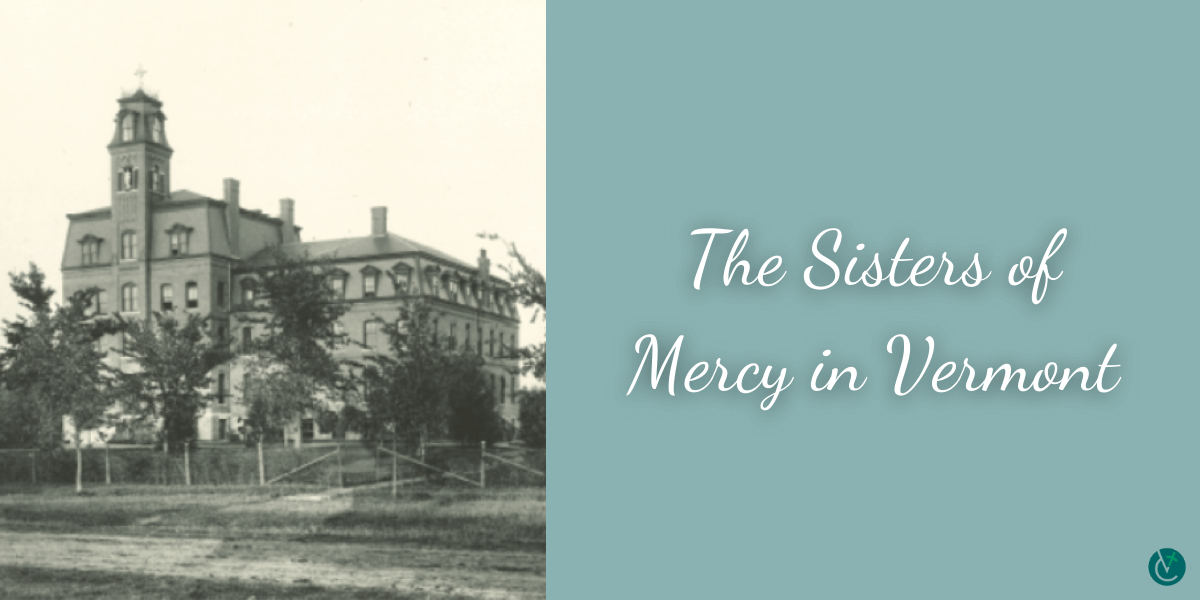 The Sisters of Mercy in Vermont

The Religious Sisters of Mercy, the Catholic order of women originally founded in Dublin, Ireland, by Catherine McAuley in 1831, began their faithful service in the Diocese of Burlington nearly 150 years ago. Foundress Catherine McAuley’s witness to truth and to love inspired many in the works of the Sisters of Mercy whose words and actions became a light for all to follow.

Sister Frances Warde, who worked closely with Mother McAuley in Ireland, established the order’s first American convent in 1843 in Pittsburgh. By 1846, Mother Warde headed west to Chicago to establish another foundation. While on her journey back to Pittsburgh, the stagecoach made a stop in Toledo, Ohio.  The cold, hungry and exhausted sister went to a nearby church where she attended Mass celebrated by the vicar general of the Diocese of Cleveland, Father Louis deGoësbriand. Father deGoësbriand invited her for a conversation and hearty breakfast after Mass.  He learned about her order and its faith-based vocational foundation to live the works of mercy. Father de Goësbriand later became the first bishop of Burlington, and Mother Warde established more Mercy foundations.

The Sisters Come to Vermont

Father Stanislaus Danielou, first resident pastor of Our Lady of Victory Church in St. Johnsbury, wanted help the “wild children” in St. Johnsbury and establish a parochial school.  Mother Warde, superior of the Mercy convent in the Diocese of Manchester, New Hampshire, received his request in 1872. Father Danielou offered his own house as their residence and promised to build them a convent.

On Aug. 20, 1872, Sisters M. Stanislaus O’Malley, M. Pauline Whalen and M. Ita Murphy arrived in St. Johnsbury. Although Father Danielou was most kind to them, their tenure was short-lived, as he was forced to discontinue the school because of the poverty in his parish and St. Johnsbury.

Bishop deGoësbriand contacted Mother Warde shortly after the sisters left St. Johnsbury, as he thought they could provide much-needed help at the Cathedral School in Burlington. Mother Warde sent five sisters to Burlington. They arrived in Burlington on Sept. 13, 1873, to “take charge of the Cathedral Schools” and within a year, construction began to build them a convent on St. Paul Street.  St. Patrick’s Convent was dedicated in 1876.  Later, the Burlington motherhouse became an independent foundation; Bishop deGoësbriand named Sister O’Malley its first superioress. In 1886, the motherhouse was established at Mount St. Mary on Mansfield Avenue in Burlington, where the sisters founded and operated St. Mary’s Academy from 1878 to 1967.

Since working to establish a foundation in Vermont in 1874, the order thrived, becoming a model for educators and charitable organizations throughout the state. By 1921, sisters ministered to the sick and elderly as well as operated parochial schools in the Burlington, Montpelier and White River Junction areas.  They have served in more than 50 Vermont cities and towns, continuing works in schools, colleges, hospitality, hospitals, parishes, prisons and diocesan institutions.  Although the Burlington motherhouse was closed permanently in 2019, the sisters maintain a strong presence in Vermont.

Hooper, RSM, Sister Cheryl.  The Historical Foundation of the Sisters of Mercy. November 1973.

—Kathleen Messier is the assistant archivist for the Diocese of Burlington.