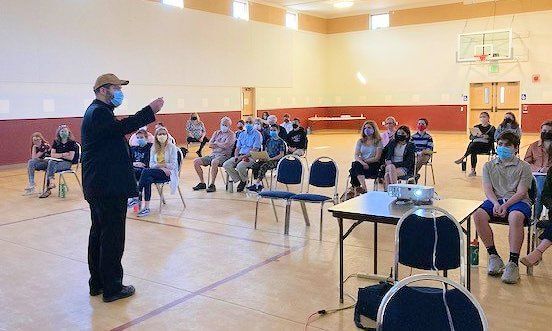 Photo Credit: submitted - Father Timothy Naples, pastor of St. John Vianney Church in South Burlington, makes a point during “The Resurrection Trial: Did Jesus Rise from the Dead?” at a confirmation retreat.

‘The Resurrection Trial: Did Jesus Rise from the Dead?’

Did Jesus really die and rise from the dead?

That was the question students in the confirmation class at St. John Vianney Church in South Burlington pondered as they participated in “The Resurrection Trial: Did Jesus Rise from the Dead?”

Students attended a staged trial in which the “prosecution” brought the “charge” that Christianity was false because the resurrection of Christ never occurred.

Their pastor, Father Timothy Naples, and religious educators joined the creator of the presentation as the witnesses in the courtroom-style presentation earlier this year.

The presenters played atheists who confronted students with a series of claims that attack the reliability of Gospel resurrection accounts. Joe Blanchette, creator of the presentation, then offered evidence and arguments designed to debunk the atheist claims.

Among the claims against the resurrection was the claim that one cannot believe in both science and faith, and “science tells us that miracles are impossible.”

Another “witness” argued that the resurrection accounts were nothing more than “mythic legends, just like Snow White or Luke Skywalker” while another claimed that the students shouldn’t trust the Gospels because no original Gospel documents exist. Still another asserted that the Gospels can’t be trusted as being historically accurate because they were written by unknown authors almost 150 years after the “alleged” crucifixion by people who never knew Jesus or any of his Apostles. Still another argued that while the disciples said they saw the risen Jesus, “the only logical explanation is that they saw some type of vision, an hallucination.”

Then during his presentation, Blanchette — a parishioner of Our Lady of Mount Carmel Parish in Charlotte — offered a detailed, evidence-based rebuttal to the “atheists.”

Blanchette’s rebuttal arguments included: 1) Science and faith do not exclude each other but coexist in explaining the truth about God’s creation. The greatest scientists of modern science, dating back centuries, like Copernicus, were Catholics and understood this. In 1927, Father George Lemaitre first proposed what the “Big Bang” theory. 2) Nearly all of today’s Biblical scholars agree that the Gospels were written within several decades of the crucifixion, not 150 years later. 3) The Gospel authors were either eyewitnesses or spoke with eyewitnesses of the risen Jesus. Some of the first Apostolic Fathers of the Church had personal knowledge of St. Peter, St. Paul and St. John. 4) The common “hallucination” challenge to the resurrection fails because hallucinations are private experiences, not identical experiences observed by hundreds of people, who saw, heard, touched, spoke to or touched the risen Jesus at different times and different locations over a 40-day period.

Students then divided into groups with their “jury foreperson” (an adult facilitator) and began discussing each claim, sharing viewpoints and questions and arriving at a decision as to whether the atheists or Christian offered the most reasonable and believable evidence about the resurrection.

Blanchette recalled that students said that the arguments for the resurrection proved to be more reasonable and believable than those of the atheists.

Blanchette’s goals for the trial were to have students hear that having doubts about their faith is normal and that it is healthy to share their doubts; to share historical evidence that Jesus died and physically rose from the dead; to inform students that the Gospel accounts were written in a timely manner by eyewitnesses to the resurrection or people who knew eyewitnesses; and to provide students with information to help them better understand why they believe what they believe about their Christian faith and be better able to withstand challenges to their faith.

“Candidates and sponsors found the activity very engaging,” Father Naples said. “It was worth the extra preparation we needed to do it, and I hope that we can find a way to have our post confirmation high school kids also engage in this exercise of introductory apologetics.”

He will be working with Blanchette to develop this activity for wider use, possibly to bring it to other parishes or to Catholic middle and high schools.

“As someone who has studied intensely the physical sciences, scripture and theology, I am glad to be involved in this serious effort to bring our Catholic intellectual responses of faith and reason where they will be needed for our youth,” Father Naples said.

The Resurrection Trail is part of Blanchette’s ministry, Dealing with Doubts: Helping our Youth Sustain Their Faith. “I am convinced the larger challenge we Catholics (and all Christians) face is getting today’s parents to understand early-on the serious challenges to the faith their kids will inevitably face,” he said. “We need parents to become better able to answer the tough questions their kids will be bringing.”