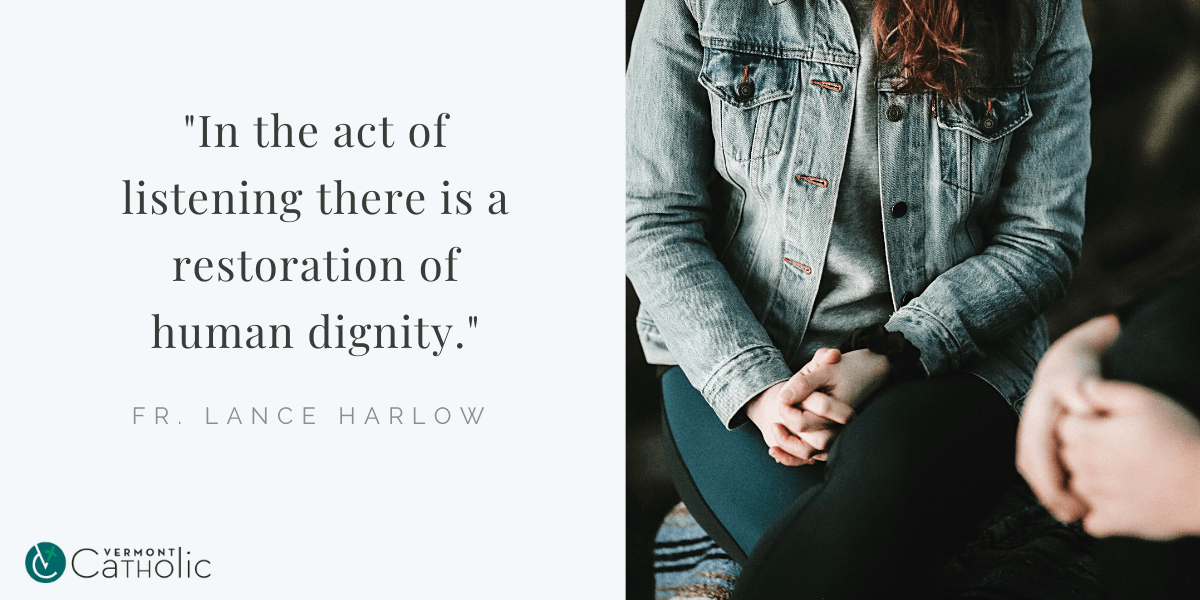 The ministry of listening

In making disciples for Christ, one can easily focus on the need for evangelization, catechesis and youth ministry. These are the usual ministerial catchphrases. For some groups of children and young adults this may be effective.

However, for the past 14 years I’ve been working with a lot of children and young adults for whom this doesn’t apply as readily. These are children who come from troubled homes and young adults who are homeless. I have worked with them in a variety of ways, mostly all nonsacramental, because they haven’t arrived at that level of faith. They are too broken. They are too discouraged. They are too ashamed. The first step toward evangelization for this population is not preaching and teaching; it’s listening — because in the act of listening there is a restoration of human dignity. It says to the other, “You and what you have to say to me are worthwhile.” Once their dignity has been recognized and healed, then they can learn about discipleship.

In Matthew’s Gospel, Jesus recognizes how much the sick and scared children need Him. The disciples don’t recognize the internal pain with which the children are struggling, but Jesus does. He knows that they want to spend time with Him so He makes it a priority. Those who were formerly rejected have now been recognized by the Healer. He listens to them, prays over them and heals them. He treats them with dignity, showing them that they are worth His time. Notice that in this passage there is no command to “Come and follow me” or “Go and sin no more.” Granted, they are children and are unable to leave their families, but the emphasis is that Jesus shares His time with them and prays with them. Perhaps years later, once they became adults, they told others that they were the children in the Gospel whom Jesus called over and how they loved telling Him about their adventures, hopes, fears and dreams — and how patient and loving He was to them.

In my work with the Kurn Hattin Homes for Children in Westminster and Spectrum Youth and Family Services in Burlington, children and young adults have entered into the priestly presence of Jesus through my spending time with them. My goal has been to help restore their human dignity. Occasionally that involves Mass, preaching, teaching and the sacraments, but for the vast majority of these children and young adults, I simply offered them my ears and my time.

And they talk. From the childlike innocence of countless knock-knock jokes, squeaky clarinets, silly young adolescent giggles to the more serious experiences of young adults telling me about their drug overdoses, promiscuity, mental illness and loneliness, they talk. It is youth ministry without any of the razzle-dazzle of retreats, loud music and enthusiastic kids on fire for the Lord. I pray that those experiences will come later for these young people. But they’re not ready yet. They just want to be considered worthy of someone’s love and attention.

It takes humility to listen because I am all too ready to leap forward with the word of correction, admonition and advice, which I do give at the appropriate moment. But my one ministerial goal for them is that they will come back again and just talk, knowing that someone has taken the time to listen to them because they are worth it.

— Father Lance Harlow is the rector of the Cathedral of St. Joseph Parish in Burlington.

— Originally published in the Fall 2019 issue of Vermont Catholic magazine.