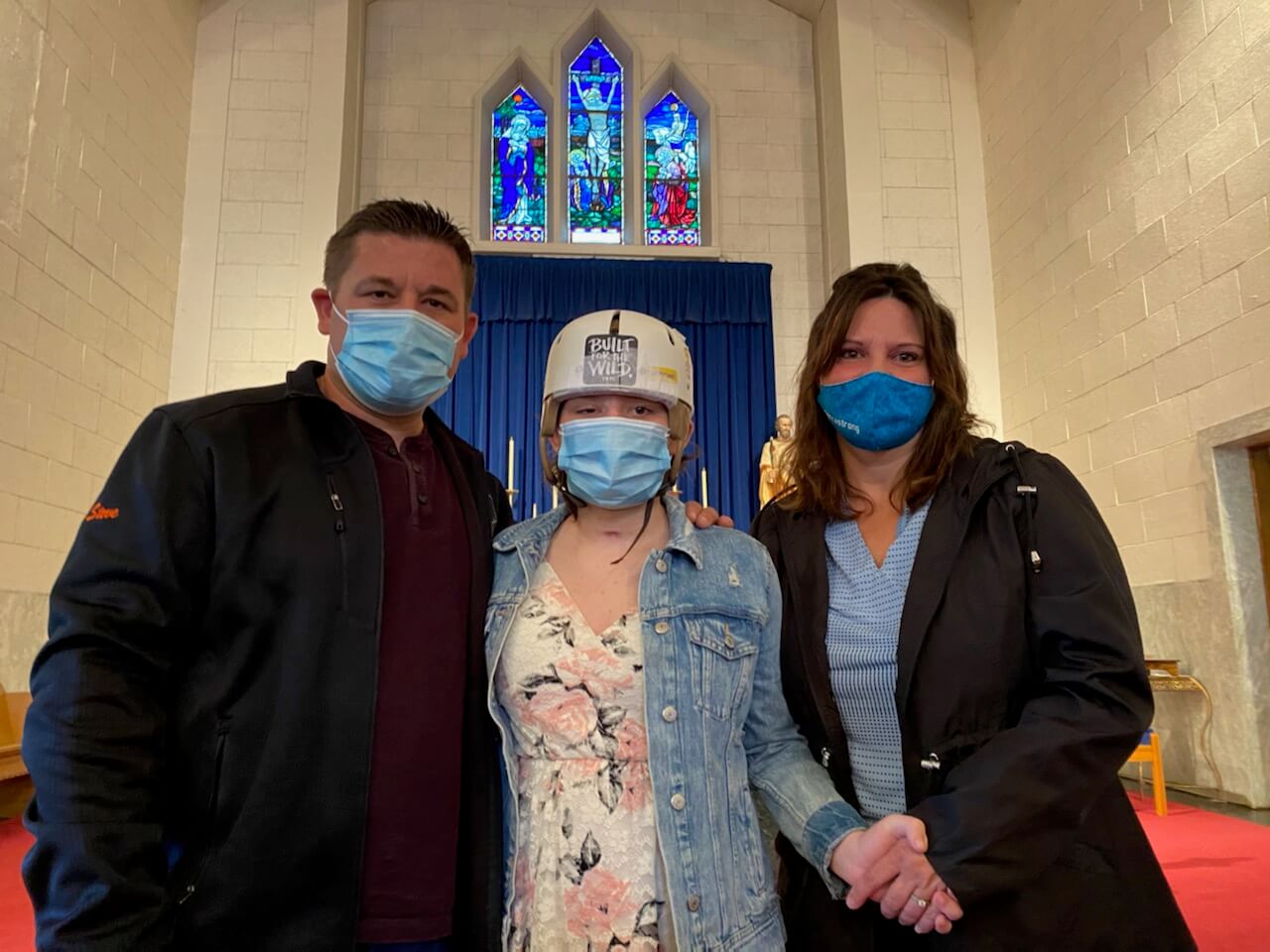 Photo Credit: submitted - Sierra Longmoore (center) stands in front of the altar at Our Lady of Perpetual Help Church in Bradford with her parents, Steven and Amy.

‘The Journey’ of Sierra Longmoore

When Sierra Longmoore talks about “the journey,” she is talking about a journey she believes took her to the presence of God and St. Padre Pio.

It began on July 8 at about 8:10 a.m. as she drove from her home in Bradford to a babysitting job in Woodsville, New Hampshire. She lost control of the SUV she was driving — her parents’ white 2006 BMW SUV; it flipped three times and rose some 13 feet into the air before hitting an oak tree.

She was wearing a seatbelt and was alone in the car when the crash occurred; it is still under investigation.

Sierra, a twin, was 17 — one of the five children of Amy and Steven Longmoore of Our Lady of Perpetual Help Parish in Bradford.

She was airlifted to Dartmouth-Hitchcock Medical Center in Hanover, New Hampshire, where on July 14 a doctor told her parents she might not live through the night. He had to remove part of her skull to alleviate pressure on her brain, the only organ damaged in the crash.

Mr. and Mrs. Longmoore put their daughter’s life in God’s hands, and when she recovered enough to talk about the experience, she told them she had seen Him and a young St. Padre Pio.

She felt reassured and deeply loved in their presence. “You don’t know love on Earth like the love God can give you,” she said.

“She definitely had a miraculous experience,” Mrs. Longmoore said.

Doctors were amazed at Sierra’s recovery and after five months could not explain it. Though some had thought she would not walk so soon after the crash — if at all — she was back at school during the second week of November and planning to graduate with her Oxbow High School Class of 2021. She can run, skip, jump, throw a softball and go up and down stairs. “She’s absolutely amazing,” Mrs. Longmoore said of her daughter.

She continues a reduced schedule of speech and physical therapy, and she plans to go to college to enter a field that will allow her to help people who have suffered traumatic injuries like she did.

After 35 days in the hospital then eight weeks of rehab in Boston, Sierra returned home to her family Oct. 6.

And she came home to more than her loving family; she came home to a community that prayed for her and raised money to help her and her family through her recovery. There was a collection for food and gas cards at the school, an ice cream business did a fund raiser, someone sold #sierrastrong signs, and her sister sold about 800 T-shirts with the same message.

People from far and near got involved; an online prayer group has about 4,000 members from as far away as South Africa and Indonesia. Her father’s employer, Home Depot, gave generously. Our Lady of Perpetual Help parishioners began a rosary chain and included Sierra in Mass intentions.

“There has been overwhelming support,” Mrs. Longmoore said.

Even before the crash Sierra went to church every Sunday; she likes to go because of her family’s devotion to God and because it brings her peace. Her message is: “We need to believe in God … because He is real.”

During Sierra’s hospitalization, someone sent a video to Mrs. Longmoore about a miracle attributed to St. Padre Pio for the cure of a girl in a car accident. She began to pray to him for her own daughter and credits him and God for Sierra’s “miraculous experience.”

After coming out of a medically induced coma, the first words Sierra said in August were to her parents who had never left her side: “I love you.”

Mrs. Longmoore considers her daughter a miracle. “In this time and [pandemic] year, people need to know God is still working miracles,” she said, adding that because of Sierra’s experience, some people have returned to the practice of their faith. “This has moved people to return to church. She is bringing people back to God,” the God who comforted her along with St. Padre Pio during the darkest time of her young life.

Sierra Longmoore (center) stands in front of the altar at Our Lady of Perpetual Help Church in Bradford with her parents, Steven and Amy.